With the resounding success of the world’s first mega-blockbuster, Steven Spielberg’s classic Jaws, the mid-to-late seventies were inundated with the “When Animals Attack” genre.   Within a span of four years more than a dozen films were released where nature struck back and it would seem that not a single creature known to zoology was going to be left out.  Bears mauled in Grizzly and Prophecy. Fish drove people out of the water in Piranha and Jaws 2. Killer whales lived up to their name in Orca, the Killer Whale.  Not to be left out were snakes, bats and dogs in Rattlers, Nightwing and The Pack, respectively.  Of course the ones that got under your skin, raised the hairs on the back of your neck and made you squirm were the insects.  Cockroaches in Bug, killer bees in The Swarm, killer worms in Squirm and the granddaddy of them all, huge tarantulas in John “Bud” Cardos’ Kingdom of the Spiders. 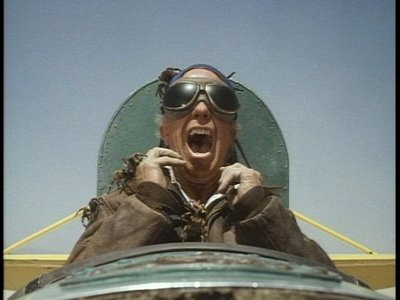 In the film, a local veterinarian is perplexed by what had killed a farmer’s prize calf and sends some blood work to the city.  He is quite surprised to see an entomologist show up who tells him he may have a problem that’s more serious than any plague.  This was no snake bite!  Spiders!  Not just any spiders but big hairy tarantulas that turn out to be five times more venomous and there are thousands of them migrating right through this peaceful little town.   Of course this happens mere weeks before Vesta Verde’s big fair and the mayor doesn’t want to start a panic.  Sound familiar?  Cue the John William’s score.   Needless to say it all goes south and the hordes of spiders attack the locals, in small number at first but eventually as a massive army of hairy legs amidst human cocoons.

William Shatner stars as Rack Hansen the vet and Tiffany Bolling is Diane Ashley the entomologist.  Shatner has to play second fiddle to his leggy co-stars but he really lays on the charm and wit he is often known for.  His playful flirtations with Bolling are quite amusing. The highlight being a picnic scene that hilariously establishes a woman’s place is to care for her man.  Shatner is funny when he needs to be and serious when he has to be.  As crazy as the premise may be he finds a nice balance of letting you in on the joke, this is a Jaws rip-off after all, and keeping you enthralled by the unfolding drama.   Thanks to her comfort with huge spiders you can easily buy Bolling as the entomologist.  She handles the spiders without hesitation and treats them with respect and reverence.   Cardos sets this up nicely by staging the obligatory scare that doesn’t go quite the way you’d expect.   The film also features Woody Strode as the farmer who has the misfortune of having a farm right smack in the middle of the kingdom of the spiders.

Now how about those spiders?   If you hate spiders you certainly will not enjoy this one.  If you really want to test your mettle watch Arachnophobia.  Obviously the spiders are the reason why to see this film.  Cardos plays around using low angle POV shots of spiders approaching their victims and frequent shots of actors with real spiders crawling all over them.  Amazingly, well at least that’s what the crew claims, no one was bitten by a spider.  Now did anyone bite a spider? Hmmm.    The film builds up to a literal onslaught of spider attacks all over town which culminates in the town being over run.  The mayhem is very entertaining.  The best shot is of an elderly couple shuffling through a crowd of spider-covered victims.  Cardos really plays with the fear that a spider could pop up anywhere.  In the car, in a plane, in the vents, in a tire, etc.  Much joy can also be derived when trying to determine if any real spiders were accidentally killed during scenes.  The film’s “spider wrangler” says none were intentionally killed.  However he says “if you happen to crawl across the street while a car is coming that’s a bad career choice.”

Shot on a budget of ½ a million dollars, most of it spent on spiders, this exploitation flick gets plenty of bang for its buck.  The film features some sampled music from TV shows like The Twilight Zone and are used quite effectively.   Apparently in one big stunt scene the principals are right there in the shot as opposed to stunt people.    That stunt in particular wasn’t entirely a stunt but some movie trickery that made it look like it was, nicely done. 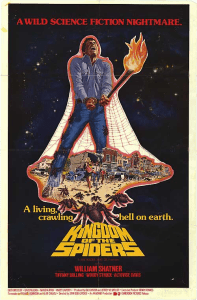 Now the thing that most people remember is the ending of the film.  It’s very bleak and haunting.   That’s is until you notice it’s a matte painting.  Oh well.  The intent is there.  It certainly leaves room for a sequel but one never came.   A remake is in the works with Cardos at the helm so it’ll be interesting to see what they have planned.  Thematically it’s a sequel but not a direct continuation.  Cardos says Shatner is up for a cameo.

For most this was seen on TV or VHS.  This viewer recalls seeing it in a Drive In in  South Jersey.   Recently it screened at the New Beverly Cinema in Hollywood, CA as part of a double feature with Cardos’ The Dark.   Cardos and a few other guests participated in a Q&A.   Seeing the film with an audience was quite entertaining.  Laughing at all the cheesy parts.  Applauding at the overacted moments.   More importantly cheering at that moment when Shatner himself gets covered in spiders.  His performance at that moment is golden.

Kingdom of the Spiders is a fun ‘70s exploitation movie that doesn’t hide from the fact that it’s basically Jaws on eight legs.  Not as intense as say Arachnophobia but certainly not as dumb as most SyFy spider flicks.   It’s definitely one of the better animal movies that came out of the ‘70s.