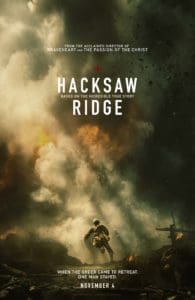 Hacksaw Ridge, a true story about a pacifist who served in World War II, opens with a slow-motion montage of somersaulting bodies on fire. The juxtaposition of content is made all the more incongruent with a righteous voiceover. The intro helps set up the stark differences between the film’s maudlin first half and brutal second half in which director Mel Gibson depicts graphic battle scenes, his first opportunity to do so since 2006’s vastly superior Apocalypto. The clashing contexts fail to connect. Medal of Honor recipient Desmond T. Doss is unquestionably a hero; unfortunately, this dramatization of his heroism feels a little too sanitized despite all of the battlefield viscera.

Doss is first shown as boy in rural Virginia with an abusive alcoholic father (Hugo Weaving), who’s also a World War I vet, a perpetually concerned-looking mother (Rachel Griffiths), and a brother who may be younger or older. An overwritten and overdramatic event sets him on his path to nonviolence.

Quickly cut to 15 years later and Doss (Andrew Garfield) goes through a few more screenplay necessities. He has a fast courtship with nurse Dorothy (Teresa Palmer), sees his brother enlist in the Army, and follows suit. Then it’s off to basic training, where his unit is the usual collection of accents and body types. Refusing to touch a firearm and hoping to become a medic, Doss’ fellow soldiers and commanding officers, including his drill sergeant (Vince Vaughn) and Captain Glover (Sam Worthington), try to make him quit. 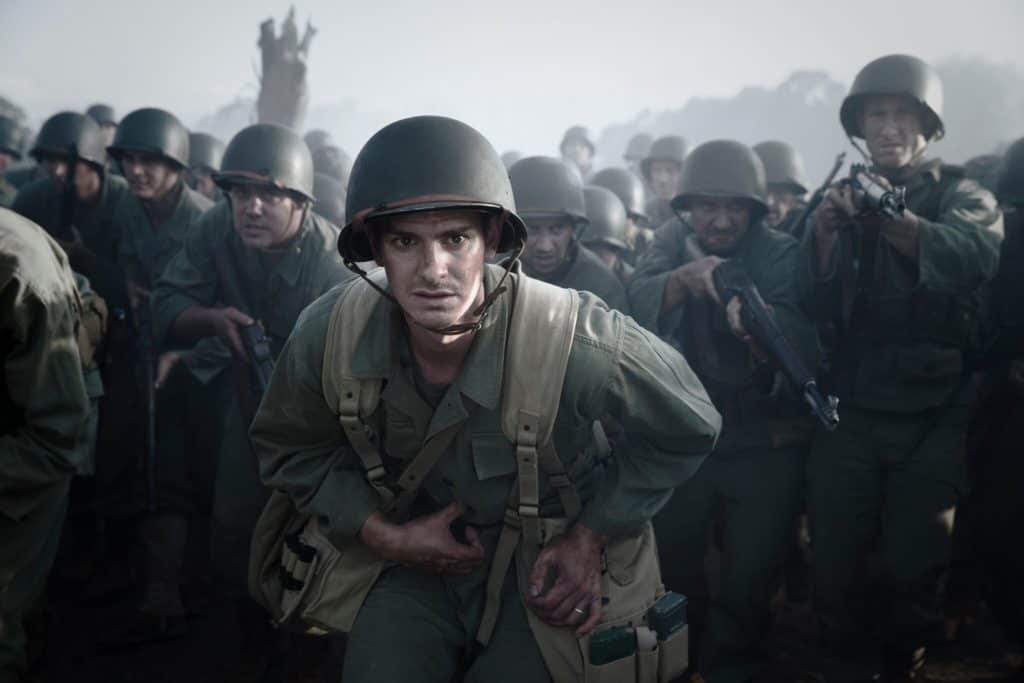 Of course, we know from the opening – and from real and war movie history, that Doss will eventually make it to the Okinawa frontlines. One of the best moments of the movie comes when his unit observes another group of bloody and beaten-looking soldiers returning from Hacksaw Ridge, the same outcropping they’re headed to, after being routed by the Japanese. The horror of war is written on their faces and it’s one of the few times that any of the sentiment feels genuine.

The backstory is completely hammy, with Weaving’s exaggerated portrayal of drunken father standing out as especially histrionic. The rigors of training don’t feel hellish for Doss, with hazing and attempts to break his spirit that aren’t especially cruel. It’s hard to discern when we’re supposed to laugh with, or at, Vaughn’s drill sergeant, and when to find him scary or endearing – he’s badly miscast. When we get to the battle and blood literally starts to rain down, he gives a stoic, “We’re not in Kansas anymore.” The buildup is all matter-of-fact and simple. 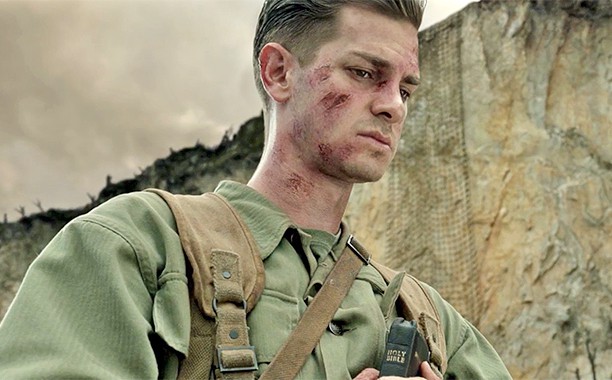 Also uncomplicated is the film’s portrayal of Doss’ unwavering principles. They’re never really tested and the main character has absolutely zero internal struggle. His moral compass is always pointed straight up, and even in the gravest situations imaginable there’s no glimpse at how perhaps his beliefs could be a danger to himself and his band of brothers. His aggressive impassiveness is deadening.  So is Garfield’s unsophisticated, good-natured drawl that overstates his decency.

Gibson stages battle sequences wonderfully, rightfully horrific and harrowing. The issues come with the layer of sap that’s poured over all of it; the gore and the corniness work to nearly cancel each other out and certainly diminish the effectiveness in telling this worthy story of an American hero.