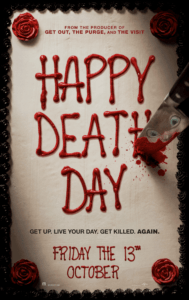 This has been a big year for Groundhog Day repurposings. March saw the release of the better-than-average Before I Fall, a teen drama that followed a high-schooler reliving the same day repeatedly. Now, that high concept has also been applied to the horror/thriller Happy Death Day with fun results. Largely bloodless, the PG-13 chiller marries its conceit with basic horror conventions delightfully while riding the charisma of its fantastic lead actress through the chaotic time loop.

The mood is set right of the bat with the familiar Universal logo stopping and restarting a few times. Then we meet Tree (Jessica Rothe), a disagreeable and irresponsible sorority girl who comes out of an alcohol-induced blackout in an unfamiliar dorm room. Greeting her is Carter (Israel Broussard), a seemingly caring guy we know is a cool nerd because of the Repo Man and They Live posters on his wall.

During and after her walk of shame, Tree encounters several characters, among them a mean-girl sorority sister (Rachel Matthews), a pushy guy she dated (Caleb Spillyards) and a married professor (Charles Aitken) with whom she’s having an affair. We come to know these, and others, as suspects because at the end of the day – which also happens to be her birthday – Tree is murdered by a masked killer. But the next morning she awakes in the same dorm room and goes through it all again, right up to her deadly fate.

Writer Scott Lobdell and director Christopher Landon do an excellent job of pacing, mixing up the experience to keep it fresh. Characters are introduced efficiently, and, as the day(s) ware on, Tree is given more depth and dimension. The experience is reminiscent of a classic ’80s slasher with only one victim, though our perception of her changes, and she becomes multiple casualties in one. 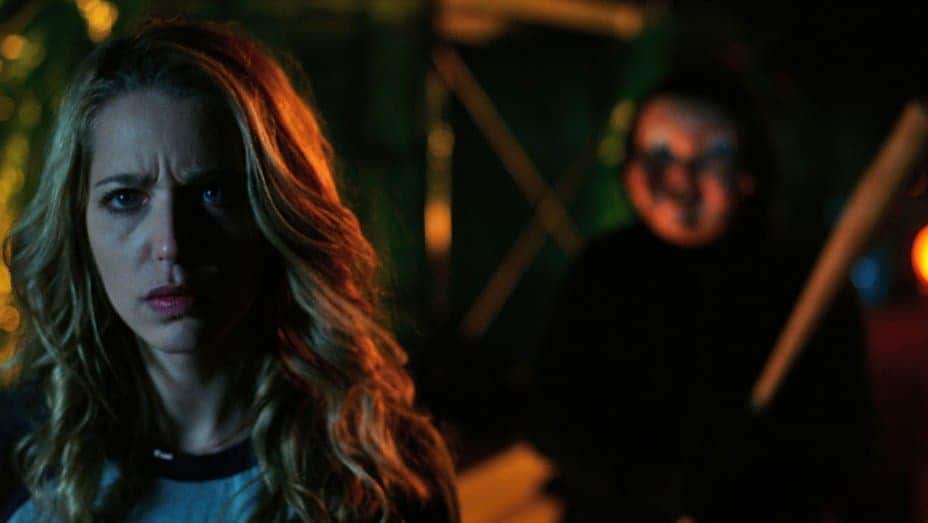 When she’s killed for the first time, Tree is like the stereotypical horror movie sinner who is the first one offed. By the end, she’s a strong, amiable final girl. The softening is subtle and gradual, with the filmmakers giving us clues as to the inner pain that’s caused Tree’s outward hardness. Rothe displays incredible range, being believable as rude, frazzled, funny, desperate and, finally, sympathetic. It’s a treat to follow her journey to inevitable death and attempts to overcome it.

The situation isn’t without some head-scratchers, however. There’s a montage halfway through with Tree going through a list of suspects that tries way too hard to be cute and feels out of place, even considering the film’s overall buoyancy. She also falls into the classic victim trap of acting foolishly in a few instances, especially considering that she knows what’s coming even more obviously than typical horror movie idiots. Some neat ideas, including the fact that Tree’s injuries from being repeatedly killed are affecting her physically, are introduced and not really followed through with.

Overall though, any issues with the story or some of the script’s more obvious lame jokes are overcome by the breezy tone and Rothe’s engaging antics. There may not be any “classic kills” (although a scene in a fraternity bedroom with thumping music and disco lights comes close) or buckets of blood, but Happy Death Day offers fun twists on horror customs while blending them with smart dark comedy. Most importantly, we get a lead we love following though the satire as she betters herself while battling the existential upheaval.