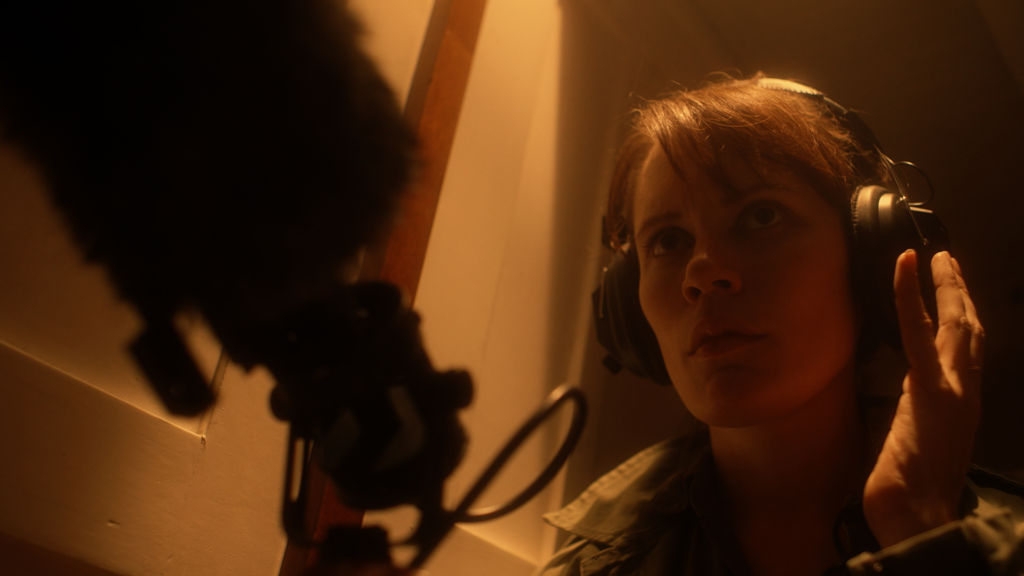 We are introduced to academic researcher and no-nonsense neurotic, Rachel (Emily Swallow), with an overwritten convergence of signs to tell us she is presently obsessed with her object of study. After waking from a nightmare in her hotel bathtub in Azores, Portugal, intensely gripping a personal memento of sorts, she proceeds to pack her research concerning the vanished crew of the Mary Celeste merchant brigantine in a hurried breath to the nonplussed reactions of her graduate assistants (Alice Hunter and Dominic DeVore).

Being stymied by the typical cagey locals who have heard the legend of the haunted vessel and would prefer not trifling with it, she puts her career and reputation on the line by sinking all of her grant money into this operation by charting a fishing boat captained by cynical skeptic Tulls (an underutilized Richard Roundtree). Much like the film that surrounds her, Rachel displays a one-track mindset to uncover the mystery of this seabound anomaly for a very personal reason.

Not to give up the ghost too early, but these types of rudimentary supernatural thrillers usually chalk this kind of obsessive behavior in a character to one of two welltread explanations, and Haunting of the Mary Celeste is not one to reinvent the wheel. This Shana Betz film is inspired by the namesake legend but attempts to affix a pseudoscientific explanation to the disappearance of the crew, which is probably for the best.

Rachel’s Bermuda Triangle-esque theory is that, when tectonic plates under the seabed shift, they essentially create rifts in the space-time continuum, which results somehow in the missing persons. Conceptually interesting, the film and its writers lack the follow-through to explore the idea and flesh it out and instead run with clumsy metaphors likening it to the blowback of a pistol discharging and just leaves it at that.

The majority of the film is staged in the cramped interiors of the fishing vessel, and this is where the film manages to shine in its otherwise-dim presentation. As the unexplained (and awkwardly inconsistent) anomalies begin to surround the ship as they travel further toward the coordinates of the disappearances, the film acquires an effective and tense atmosphere that makes excellent usage out of the single set and budgetary restrictions.

A chilling sound design of water churning, worn wood creaking and scientific equipment malfunctioning – together with the claustrophobic rooms, intimately close direction style and that mystique of not knowing how the anomaly will manifest next – give evidence to Betz’s direction shining through the Haunting of the Mary Celeste. There are moments of unsettling stress in the film’s second act that, while appreciated, only really work to highlight how lopsided the film is.

While operating in this oblique manner, Betz’s film has moments of genuine terror, but the more it attempts to unravel its premise the less engaging the film becomes. While the characters are frustratingly one-dimensional, undercutting the potential emotional resonance, this anomaly gets more inconsistent and uninteresting the more that the film attempts to explain how it works.

The anomaly behind these disappearances doesn’t just make you vanish wholesale, but instead oddly seems to stalk and target you when you are unguarded. For as much as the film spends on its initial rationalization for these mysterious disappearances, when it’s prompted to finally present it to the audience, the filmmakers seem to adopt an “anything goes” mentality and hope you aren’t too stuck up on its premise.

Haunting of the Mary Celeste is mostly the skin and bones of what is meaty potential for a supernatural horror film. Ethical hangups about attaching supernatural shenanigans to a very real case of unexplained disappearances, the case of the Mary Celeste is ripe for the horror genre in that, being unexplained, one’s imagination gets to run wild in trying to explain what malevolent force was the cause behind it all. Compounded by its unoriginal story beats, the film comes out feeling uninspired, outside of its impressive direction.