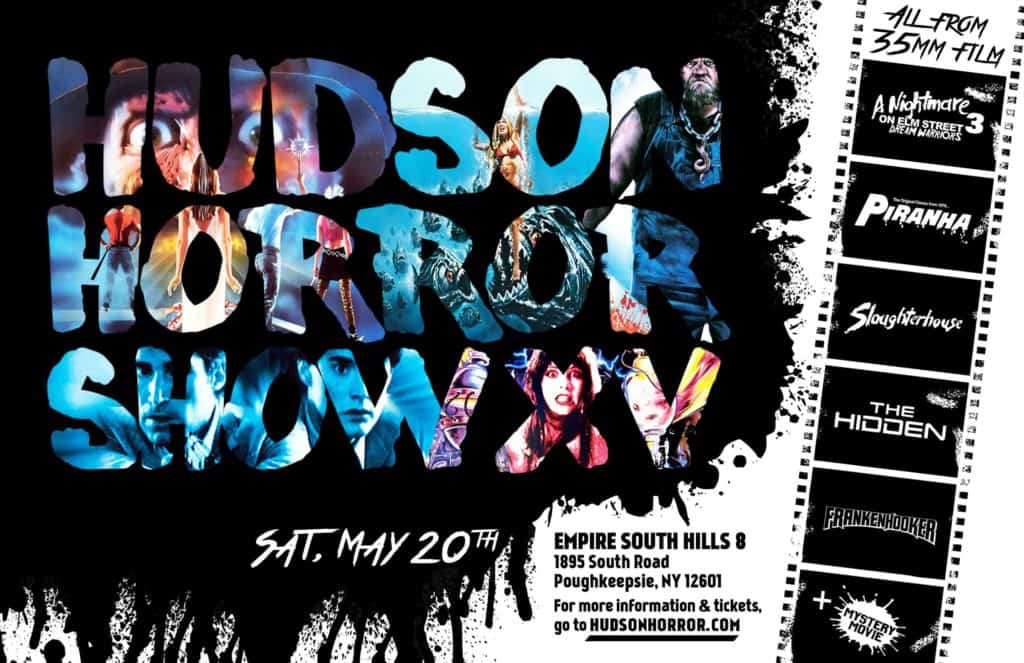 The Hudson Horror Show is back with another great batch of horror flicks presented in all their 35mm glory. The 15th installment of the festival will include screenings of Frankenhooker, A Nightmare on Elm Street 3, Piranha, and The Hidden, plus a special mystery movie.

The 12-hour marathon will take place at the Empire South Hills 8 on Saturday, May 20th in Poughkeepsie NY. For more info and tickets head over to the official web site at hudsonhorror.com.

Here’s the full release regarding the show:

Welcome to prime time bitches, its Hudson Horror Show #15!  The Hudson Valley’s only 12 hour cult film festival, Hudson Horror Show #15, will take place on Saturday May 20th, 2017 at the South Hills Cinema 8 in Poughkeepsie, NY.  Tickets are just $38.00 in advance and going fast and only available at www.hudsonhorror.com.  We’ll show six movies, all off rare 35mm film prints.

Just added to our lineup is an ultra rare screening of Frank Henenlotter’s FRANKENHOOKER!  The director of the BASKET CASE trilogy helmed this 1990 horror comedy which features as many laughs as it does thrills and stars the always hysterical James Lorinz from STREET TRASH as well as 1988 Penthouse Pet of the Year Patty Mullen.

Our buds at the world’s best home video label Vinegar Syndrome are proud to present a rare 35mm screening of SLAUGHTERHOUSE!  This late 80’s slasher is grimy and gruesome, but still so much fun.  Just missing the slasher craze by a few years, if you’ve never seen this flick before, now is your chance to see it on the big screen.

We’ll of course have the HUDSON HORROR MYSTERY MOVIE and no, this one is not a horror movie.  But just because it’s not a horror movie, doesn’t mean it’s not filled with violence and buckets of gore.  Want to see what we are playing?  You’ll have to buy a ticket and come see for yourself!

The maniacal Jordan G from the B Movie Film Vault is out of the asylum once again and this time is sponsoring a 30th anniversary screening of THE HIDDEN!  The sci-fi horror cult classic is a true rollercoaster ride and only Jordan is crazy enough to bring it to you.

Just when you thought it was safe to go back in the water, you still get nibbled to death by the frenzy that is PIRANHA!  Joe Dante’s 1978 classic is one of the most requested titles by you, the Hudson Horror audience.  With a cast that includes Kevin McCarthy, Barbara Steele and that guy Dick Miller, PIRANHA is a movie that you will just eat up!

Lastly, but not least, we are equally looking forward to a 30th anniversary screening of one A NIGHTMARE ON ELM STREET 3: DREAM WARRIORS!  One of the most popular entries in the famed franchise, we’ll be laughing along to Freddy’s dated puns almost as much as we are rockin’ to Dokken!

As usual, lobbies at the theater will be packed to the gills with vendors selling t-shirts, DVD’s, toys, posters and so much more.  Tickets are not needed to shop the vendor’s area, but you will need a ticket to watch the movies.  We do run the same movies at the same time in two different theater rooms, theater room#1 and theater room #6.  But theater room #6 is already sold out; we have limited tickets left for theater room #1, so grab your tickets now!  Special thanks to Dana Zheng for the kickass poster design.