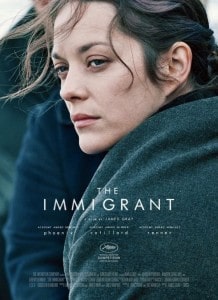 Melodramatic manipulation is onstage in a rundown section of 1920s Manhattan where young female immigrants persevere burlesque and prostitution in their unwavering pursuits of the elusive American Dream. A life filled at first with a solidarity in sorority among the bathhouses and living quarters, sporadically giving way to self-preservation through an instinctual survival skill set, James Gray’s melodramatic, yet realistically bleak, depiction of one Polish woman’s quest for the American Dream, not only for herself but also for her sister, currently quarantined at Ellis Island with tuberculosis.

Marion Cotillard is that young Polish woman, Ewa Cybulska, who walks off the boat at Ellis Island with her sister, Magda (Angela Sarafyan), and straight into a manipulated life rigged from the moment she set foot on American soil. Her sister, unable to suppress fleeting coughing fits, is promptly removed from queue while Ewa is subsequently set adrift into a life devoid of prospects, no family to stay with after learning her aunt and uncle’s address does not exist, plus facing deportation after the immigration officer casts dispersions on Ewa’s moral standing until Bruno Weiss (Joaquin Phoenix) appears, saving Ewa from her current predicament.

All of these narrative progressions play out in predictable fashion. Ewa hates, but needs Bruno, who of course falls in love with Ewa. Another man levitates his way into Ewa’s heart by the name of Orlando the Magician (Jeremy Renner) with promises of freedom and money, money to rescue Ewa’s sister and move out west to California to start a new life, just the three of them. Not only is The Immigrant undeniably predictable, but it also happens to be frustratingly awkward in its presentation. Scenes that are left to breathe instead come off as amateur improv where the actors lack the ability to effectively end conversations and interactions, simply opting to stand around lazily kicking the ground at their feet.

Fortunately, the visuals delivered from Darius Khondji occasionally break up the monotony of the melodramatic manilla folder material on display; gloaming-set sequences swathed in musty ochres, sewer-set beat-downs by lamplight and departing at dawn on the fog-rich waters by rowboat, all of which are presented beautifully, but not enough to save the film. Gray’s bleak period-piece is far from awful, although it is equally far from greatness as well, occupying a middle ground of quality that makes it immensely forgettable. If only the film played out with the emotional intensity unveiled in the deftly composed conclusive scene between Pheonix and Cotillard.