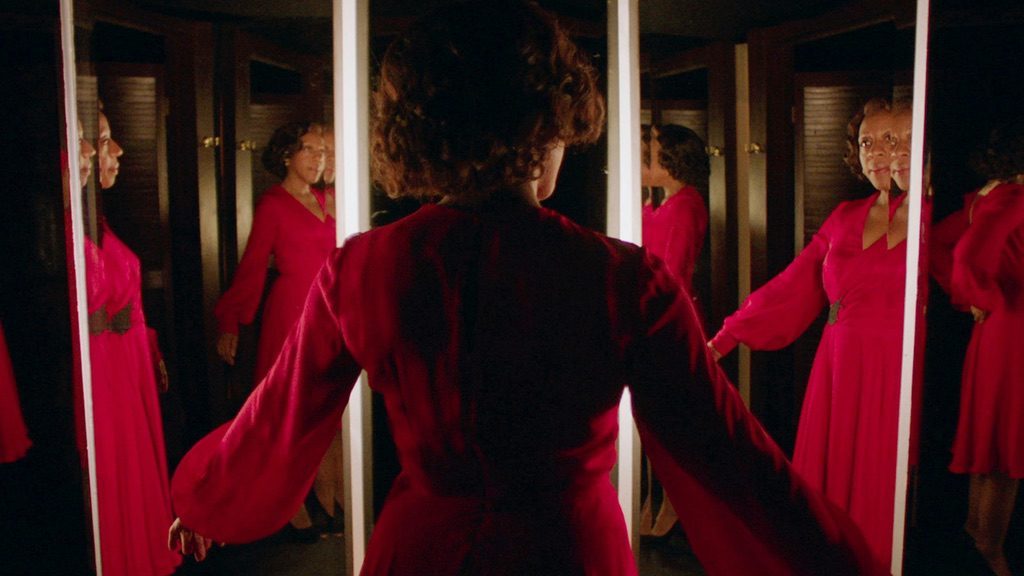 If it somehow wasn’t clear that director Peter Strickland was a massive fan of giallo, the Italian horror-thriller genre, In Fabric’s loving parody of the genre’s more absurd storytelling elements and meticulous approximation of its distinctive style is here to dispel any rumor that he is not the Acting President of the Dario Argento fanclub.

While his previous horror film, the meta-referential Berberian Sound Studio, proved to be more of a knowing flirtation with the genre than an actual entry in it, his latest fully gives into the esoteric characteristics of the beloved horror style for the sake of a raucous – if uneven – comedy affair, which doesn’t so much skewer said characteristics as celebrate them. Alhough rightfully advertised as the “killer dress movie,” the deliberate invocation of the intrigue and psychological terror of giallo give In Fabric much more of a strong foot to stand on as it shoulders its ludicrous premise. The likening of it to “Rubber for Couturiers” only scratches the bizarre surface of Strickland’s inscrutable vision. 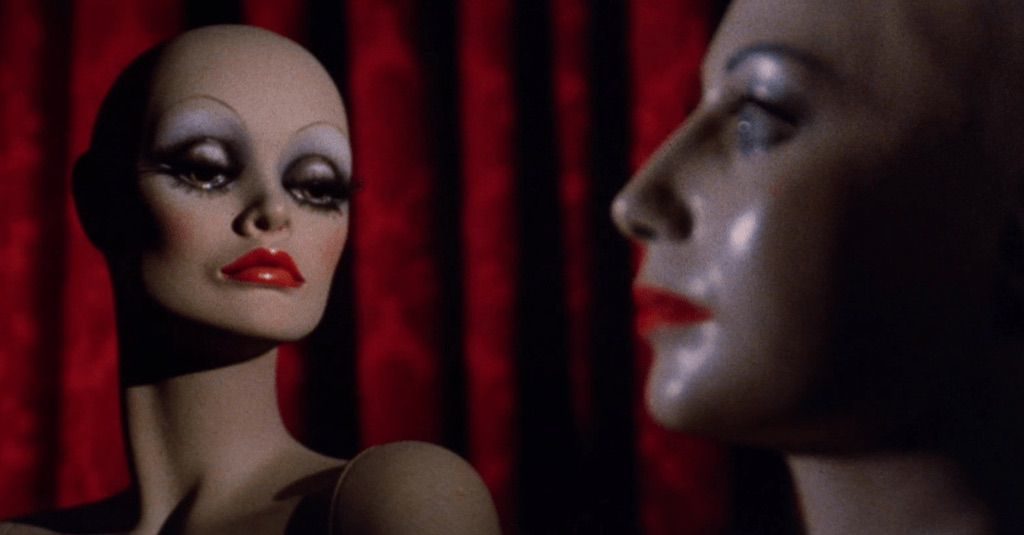 The film centers on a mysterious department store known as Dentley & Soper’s, which, for all intents and purposes, functions similar to the Friedberg Dance Academy in Suspiria as a not-too-subtle front for a mysterious tribunal of oblique mystics whose motivations are deeply ambiguous. Staffed by a laughably peculiar bunch who couldn’t advertise their sinister nature any clearer, their special-event sales attract the mousy divorcée Sheila Woodchapel (Marianne Jean-Baptiste), who purchases a dress to essentially get back out into the dating world. The hilarious and verbose sales associate (Fatma Mohammed)  waxes poetic about the retail experience like it is an ancient ritual of nefarious intent.

The dress holds a curious quality that bonds it to its owner and slowly, insidiously impact her life. This takes the form of the red formal wear terrorizing Sheila in a number of creative yet ridiculous methods, including causing her washing machine to go violently haywire; skulking around her home and attempting to asphyxiate people; inciting dogs to maul her; and so on, all played with the utmost seriousness. 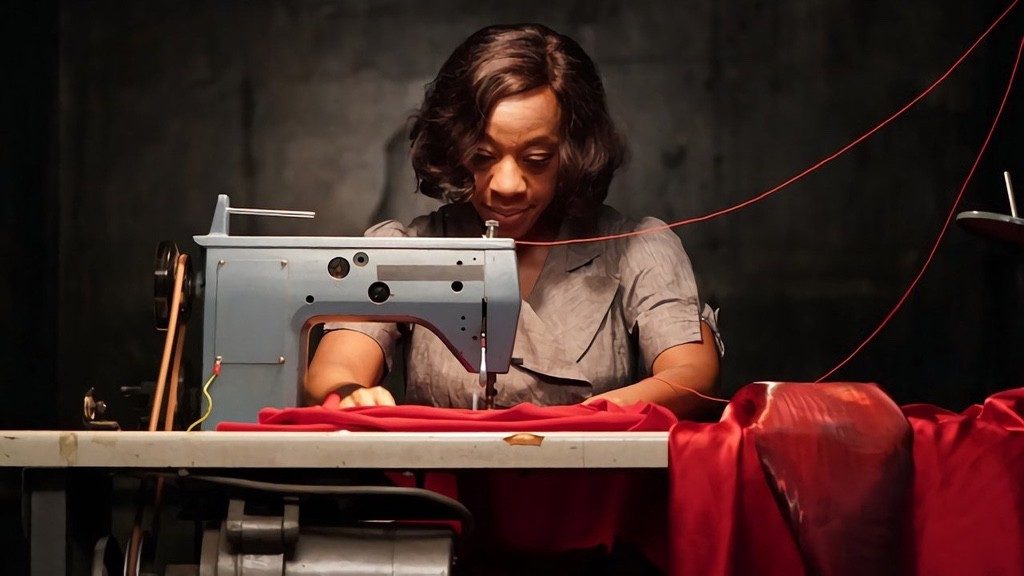 Not only does Strickland’s plot of a sinister coven-like group of eccentrics somehow pulling the strings behind this ordeal borrow generously from giallo to establish a sinister yet farcical mood, he and cinematographer Ari Wegner also go to extraordinary lengths to recreate the look and feel of those ostentatious splatter films from which he draws his inspiration. Aided by the overbearing restraint it shows in its shots and the kitschy production design lifted wholesale from Britain’s Swinging Sixties, the film’s atmosphere is equal parts gauche camp and arty sterility as it revels in the absurdity of its own premise. At times it can be surreal, as when the employees of Dentley & Soper’s perform a blood ritual with a mannequin that is noticeably anatomically correct, and at other times it can be dryly comic, as when Julain Barrett and Steve Oram perform a whole duo standup routine about workplace time management. 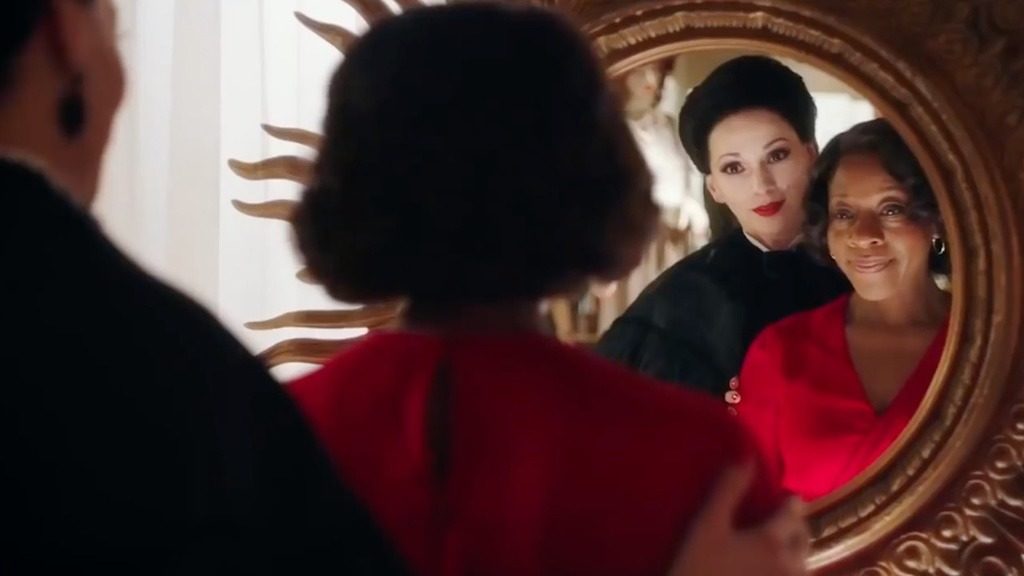 In Fabric strikes a nice balance between honoring its source of inspiration and knowing full well that the source is flawed and strange enough to be ripe for having fun with.

The one major shortcoming of In Fabric’s loving pastiche of giallo is its narrative structure. Without revealing too many plot details, the film becomes bifurcated midway through, and while the decision doesn’t necessarily detract from the experience of In Fabric, the transition feels abrupt. The switching of focus may not take away from the bizarre experience of Strickland’s latest, but whether or not it adds anything remains to be seen.Minor scruples aside, In Fabric is a unique horror experience in a year that has not exactly had a shortage of films that could be described as such. Salacious and nonsensical in such admirable manners, the film sees Strickland harnessing his more obtuse qualities as a director and stylist to great effect.