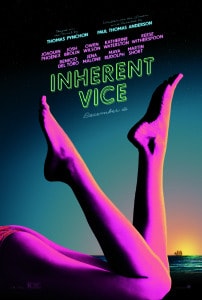 Paul Thomas Anderson is one of American cinema’s youngest auteurs. He has a distinctive voice, yet each picture is diverse. With Inherent Vice, he creates an often absurdist comedy with plenty of dramatic events to spur the movie along.

I have had great difficulty reviewing this film because I so enjoyed earlier Anderson films like Boogie Nights and There Will Be Blood. But this film, as with his previous effort, The Master, left me shaking my head. Halfway through this film, I found myself referring to it as “Incoherent Vice” because there were too many storylines, none of which seemed to properly connect to one another. It is a fine effort on Anderson’s part and there are many of the usual Anderson touches present, but it did not connect with me the way his earlier films had.

Inherent Vice follows Larry “Doc” Sportello (Joaquin Phoenix), a Californian private investigator working in the 1970s. As the film opens, his ex-girlfriend Shasta (Katherine Waterston) has come to him with a problem. She believes the married man with whom she’s having an affair is about to be wrongly committed to a lunatic asylum so that the man’s wife and the wife’s lover can take control of his money. Shasta wants Doc to help, and he agrees for her sake, as it is obvious he still has feelings for her. I was interested in this setup and was anxious to see how it progressed. But the script began meandering as Doc’s initial investigation into Shasta’s married man – last name Wolfmann (Eric Roberts) – turned into a many-threaded tapestry of crazy goings-on.

Doc finds himself involved with a presumed-dead Coy Harlingen (Owen Wilson), who, it turns out, is an informant for the Los Angeles Police Department and President Nixon’s vigilant California vanguard. Doc also uncovers a mysterious organization known as the Golden Fang, which is either a syndicate of dentists or a major heroin importer or both. Somehow, all of these mysteries are connected, but the film does not do a good job of connecting the proverbial dots, at least, not in this reviewer’s opinion. The film is often confusing, though perhaps by design, so I will not fault it for its convoluted narrative.

The film is also part buddy comedy, as Doc often finds himself working with LAPD Detective “Bigfoot” Bjornsen (Josh Brolin). Bigfoot relies on Doc for information but also uses him as bait, placing him in the center of precarious situations. Their relationship cannot be said to be mutually beneficial, with the rare exception of when Bigfoot provides Doc with some worthwhile intelligence of his own.

The film has many an Anderson hallmark, particularly the strikingly distinctive dialogue and long takes where Anderson just sets up the camera and lets the action play out in a master shot. The score is decidedly Anderson-esque and greatly contributes to the film’s overall feel. Also important is the gritty look of the film; it is reminiscent of Boogie Nights in many ways. But the film left me cold. I found it difficult to fully appreciate the characters or their predicaments. And as I mentioned above, much of the film was incoherent to me. Many critics have been heaping praise on Anderson’s latest, but I wonder if it is just because this is Anderson and we are expected to like everything he does. I wanted to love this movie, but I came away feeling simultaneously unsatisfied and exhilarated – the latter because of what Anderson was trying to do with his pulpish film yet unsatisfied with what he had ultimately achieved in the process.