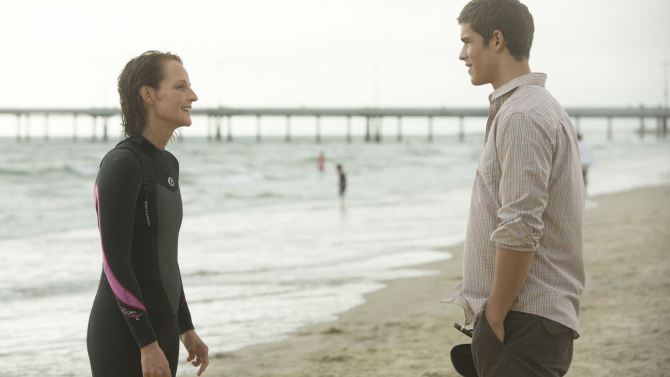 Film Pulse’s Ernie Trinidad recently had the opportunity to speak with Brenton Thwaites, who is the star of Ride, which opens in theaters and will be available on VOD platforms this Friday. The film was written by, directed by and also stars Helen Hunt.

I play a character called Angelo who lives in Greenwich Village in New York with his mother, and he’s about to start a college degree, studying creative writing at NYU. The pressure becomes too much for him and he decides to leave that lifestyle and travel to Los Angeles to be with his father and experience a different way of life.

Was there anything in the part that you relate to, with yourself being an actor from Australia and jumping all across the world?

I can relate to being a young person heading into university. I did a three-year degree in acting, which was great, but I can relate to the uncertainty and anxiety of basically deciding what you want to do for the rest of your life or at least for a long period of your life.

In my first year of college I just wanted to leave; I wanted to come and act or be in a movie. I felt uneasy and restless, so I took some of that to the character. I decided to stay and finish out my degree, luckily, whereas Angelo, the opposite, and does leave. But that’s not the point; it’s more about him finding himself and finding his voice.

As a viewer you can totally relate what he’s going through, especially when reflecting back on our own life experiences and thinking about times when we weren’t sure what we wanted to do.

Yeah, I can very much relate to running away from the decision-making process. For most of my movies, I’ve traveled around with a guitar and a backpack and, in a certain way, I’m not running from anything. But you learn to pick up everything and move on and leave your problems behind a little bit, so I guess in a sense he’s just picking up and going to try and discover a different perspective.

How did you land this role? Did you have to audition?

I had to audition twice. I believed I was unsuccessful , so I think that I demanded to audition for a second time. I just knew I could do this – and I wanted to do this. So I can’t remember exactly what happened, but I either sent Helen an email or got in touch with her through my manager, just saying “I love this…can I try a different thing?” And she was very open to a second try. I think she wanted to see what I could do with the character, and so I came in with a slightly different take and I guess she liked it.

Which take did you bring into the role, or was it a little bit of both?

Have you surfed before?

I have. I surfed as a kid, growing up on the coast. I grew up in a place that is protected by the Great Barrier Reef, so there are not many waves there. However I used to travel down to the gulf coast, which is about a two-day drive down south where there’s more waves and a prettier coastline. We used to holiday down there, so I could surf, not fantastically or anything.

Which waters do you prefer to ride? Australia or L.A.?

I like Australia because you can see in the water; the sharks can see you and see you’re human. Here I feel like sharks can’t really see that a human is a human instead of a sea otter.

If you had the opportunity to just get away, to find yourself or figure out what you want to do next in life, where would you want to escape to?

I guess I would want to escape to somewhere in nature. But I am a people person; I like to connect to people, so I think I’d be missing something. Solitude is quite nice to find yourself and find your clarity, but in , you lose learning who you are from talking to other people and learning how you respond to different situations. I think it’s important to find your balance between your alone time and time meeting new people.

Speaking of new people, just in the last two years, you’ve worked with a lot of people – including Lawrence Fishburne, Johnny Depp, Jeff Bridges and Julianne Moore – and now with Ride, you’ve worked with Helen Hunt and Luke Wilson. What do you think you’ve taken away from working with these people, and how has it informed your craft, specifically with this film?

Well, in terms of the film industry, I think it was important to observe how passionate this crew was, how Helen really inspired them to work very hard for very little money, little time, little resources. It’s an example of how good material can get made into a film with the right people behind it.