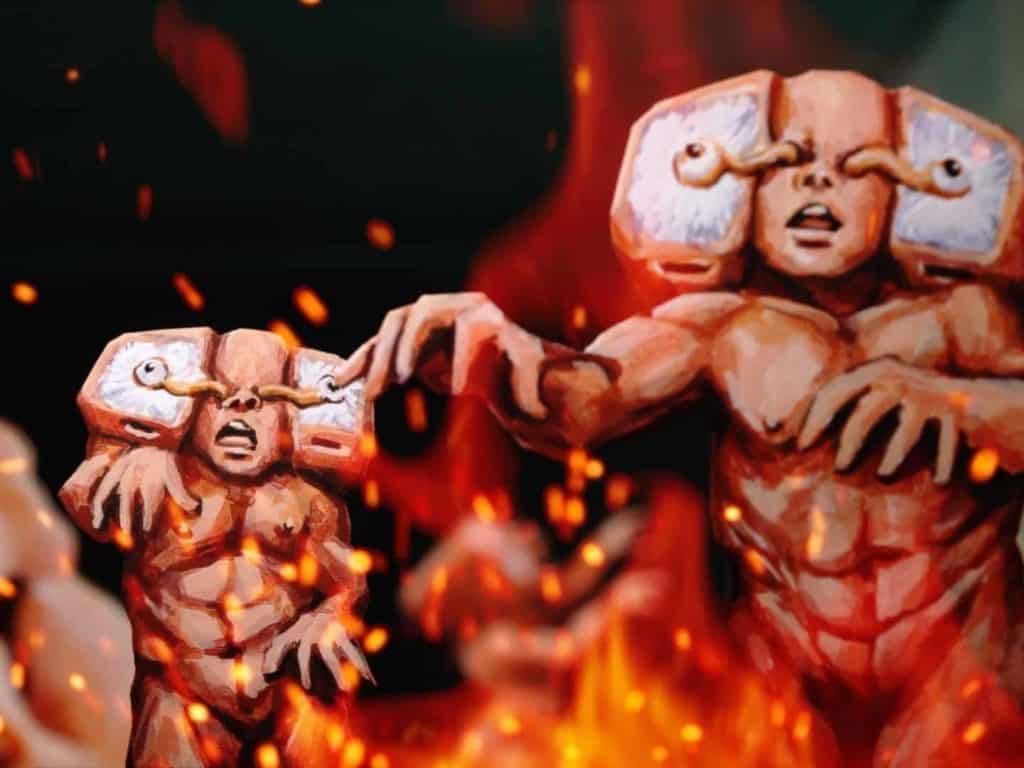 This is a repost of our review from Japan Cuts 2018. Violence Voyager opens in Los Angeles July 5th.

Appearances can be quite deceptive in Ujicha’s disturbing, psychedelic throwback to Japan’s science-fiction and horror boom that the late ’60s to early ’80s had, in the wake of a certain lumbering lizard dominating the box office.

Not only could the alien-invasion themed amusement park that you and your best friend stumble across in the secluded mountains outside your village be a front for a sinister body-horror nightmare of a mad scientist, but the storybook aesthetics and disarming color of Violence Voyager make you ill-prepared when things get rough for American boy Bobby and his best friend Akkun.

While on the outside, one could mistake the debut feature of independent animator Ujicha for a segment in a kids variety program, the twisted interior of forced body mutation, rampant cannibalism and a score of dead kids floating at the bottom of a chemical vat knock that presumed innocence right out of your head and stomp it into the dirt. 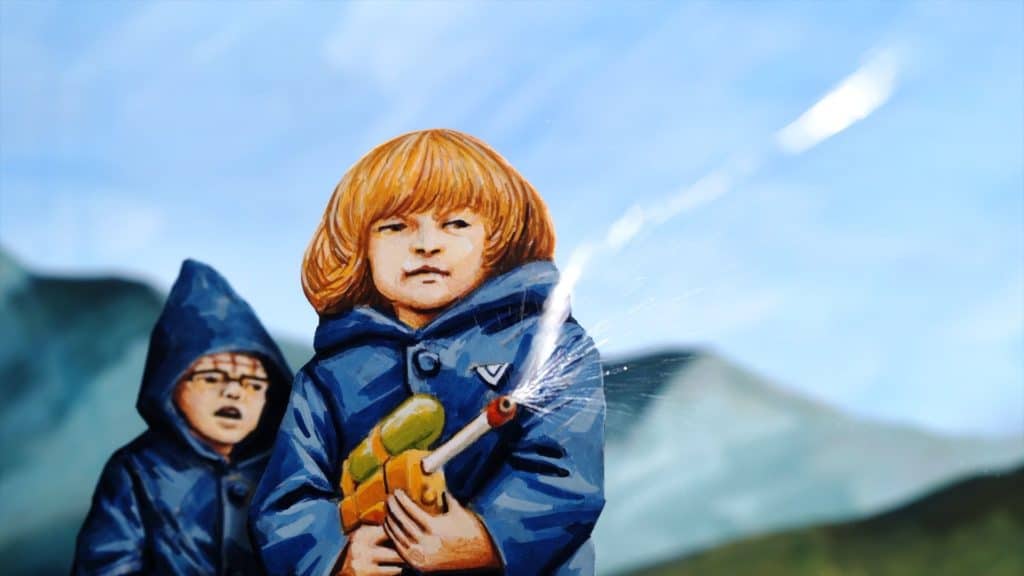 Blindsiding doesn’t even begin to cover the tonal jump that Violence Voyager, a limited cutout animation, pulls over on the audience, and if you can stomach its gore and its aesthetically grating animation, there is some bloody good fun to be had.

Innocently enough, Bobby and Akkun want to travel over the mountain to meet with a friend at the village on the other side and take with them a day’s supplies and Bobby’s cat, Derrick. Venturing into the forest, they come across the hermit known only as Old Man Luckey-Monkey, who warns them about going up the mountain, but being grade schoolers, they ignore his sagely advice and proceed to stumble onto Violence Voyager, a secluded theme park where you role-play an alien invasion.

The boys are hesitant, as the remote attraction’s owner is an imposing-scientist type who looks a little too into it, but nonetheless they roll with the Goosebumpian premise. This is where Ujicha takes his kid gloves off and reveals the disturbing set pieces that root Voyager firmly into the Shochiku sci-fi-tinged horror films of the ’70s. 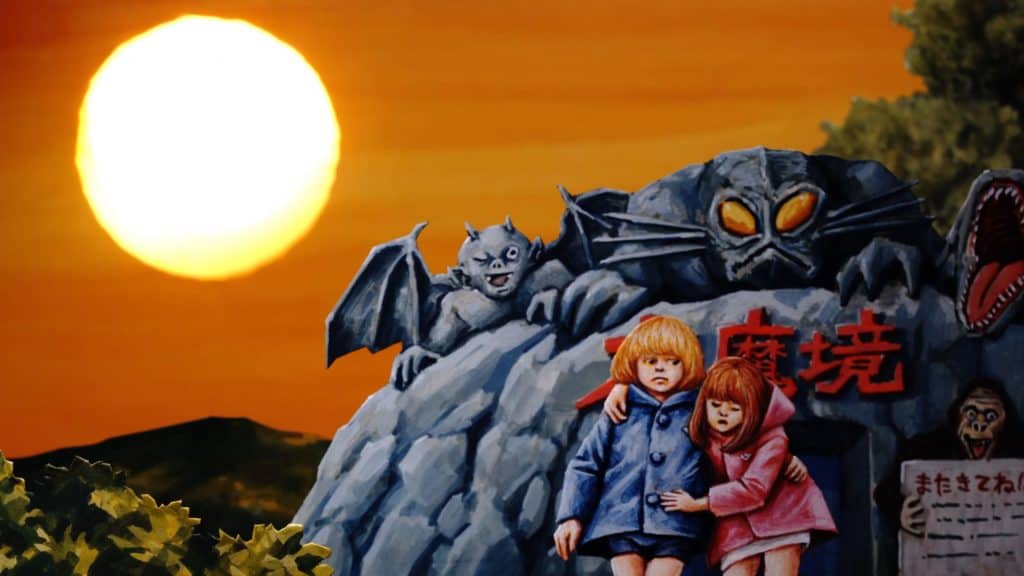 The gory shift can be perceived as sudden, but the effectively applied horror trope of the “harbinger of impending doom” (thank you for the term, Cabin in the Woods) and the sweetness Ujicha stacks into the opening prepares you somewhat for when the blood starts to flow.

The boys come across a girl who claims she has been hiding for days from a monster in the form of the alien cutouts they had been happily shooting with water guns in the role-play. It appears, looking like a rectangular birdbot with beady eyes and a beak sandwiched between a head that is shaped like a computer monitor; whisks her away; and Bobby and Akkun stumble onto a group of lost children.

They learn that Violence Voyager has been a ruse perpetrated by disgraced researcher Koike, who has been luring kids into the park to their demise for a mysterious purpose involving the rogue alien. What his research is, how it works in mutating the kids and to what extent this experiment goes is never really explained in any detail. It is a missed opportunity to bolster the endearing premise beyond the vanilla, mad-scientist setup, but nonetheless, Ujicha doesn’t trade in inquisitive science fiction so much as hard shock value, which Violence Voyager has in spades. 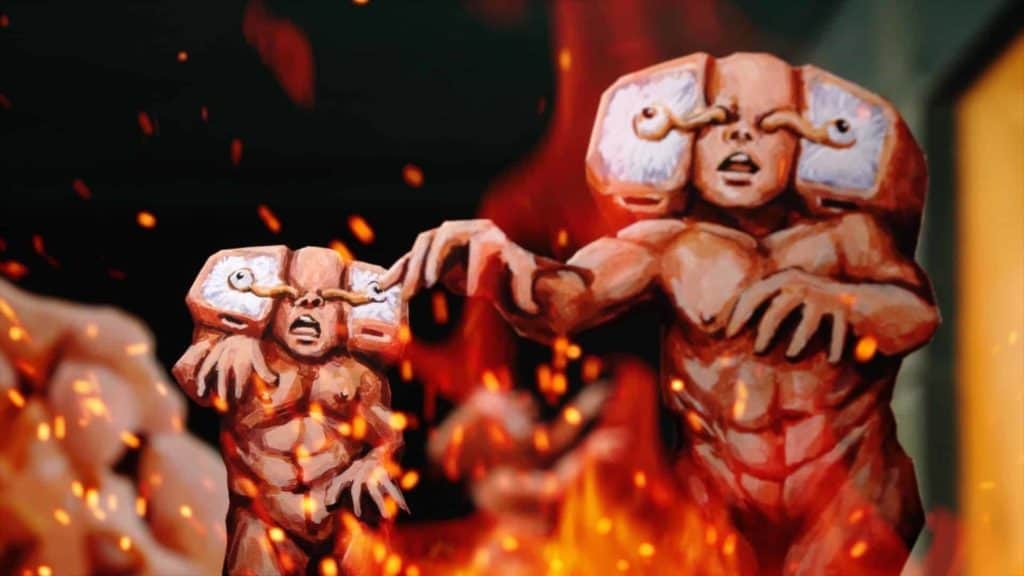 The effect is really indebted to the art style, with all its intensive arts-and-crafts labor in building hundreds of stick-puppet models for every pose, expression and action in a scene. As the film goes on to engage in some pretty heavy gore in the realm of children’s faces dissolving in acid, dissection and a bio-mechanical mound of sentient flesh known as M O T H E R, there is a textured mollifying happening with the childlike style that makes it somehow more palatable and more unsettling.

The choice to present this fantastical horror story in rigid, limited animation sets it apart from any other animated product to come out of JAPAN CUTS this year, but the stiffness of any motion can weigh on you if the initial shock of the content doesn’t hook you. Violence Voyager is not the most active animated film you could see, and those looking for any kind of fluidity between drawings are going to be disappointed.

There are sparks of ingenuity in how he uses the puppets to portray bodily actions like bleeding and vomiting or how he is unafraid to physically damage these figures and just sets several on fire in one scene. Though it is not difficult to gleam the dedication and effort from any frame of the film, the effect is still just barely above makeshift puppetry. 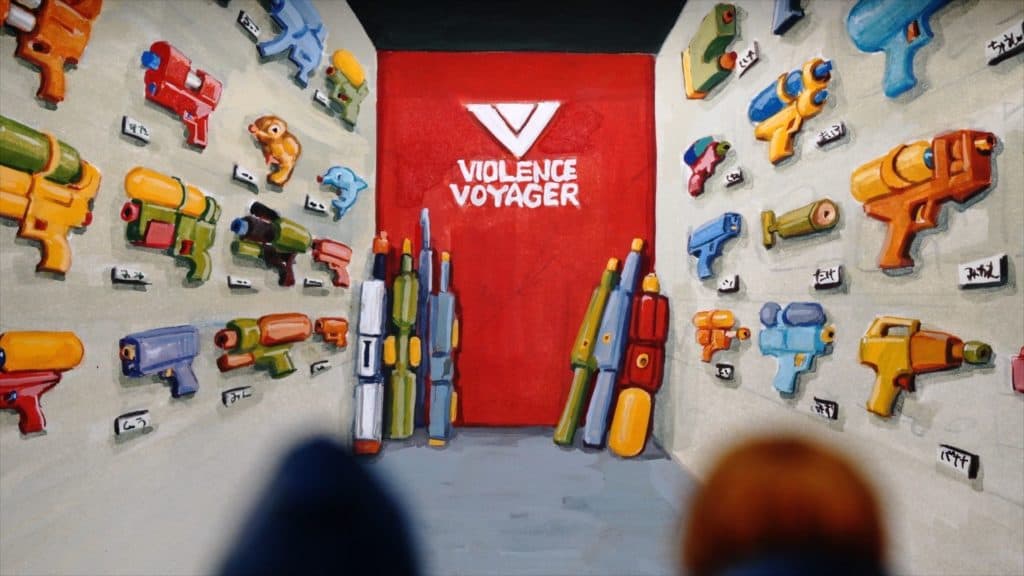 Violence Voyager is also a little bit of a downer due to the crippling amount of adversity and struggle through which it puts its protagonist (a tad overdone for my tastes). Bobby and Akkun are put through a tortuous hell at the hands of Koike, and as the film progresses, their situation just gets worse and more hopeless the more that they struggle against his machinations.

As bodies pile up, including those of friends and loved ones, and life-changing injuries are sustained, Ujicha really rubs the lightheartedness of the opening in your face in how raw he can be with his characters. Not necessarily a problem, but once you get over the initial shock of the premise, the excessive piling of misfortune and grotesque scenes gets tedious. The film puts all its stock on that sudden jump to throwback body horror against kids, and while successfully pulled off, the film runs out of places to go soon after.

Yet Violence Voyager remains a disturbing bait and switch of gory delights for all who can stomach it. It remains to be seen if its shock value will endear it to subsequent visits, but that first experience is a satisfying testing of one’s own tolerance and should find its cult audience soon enough.