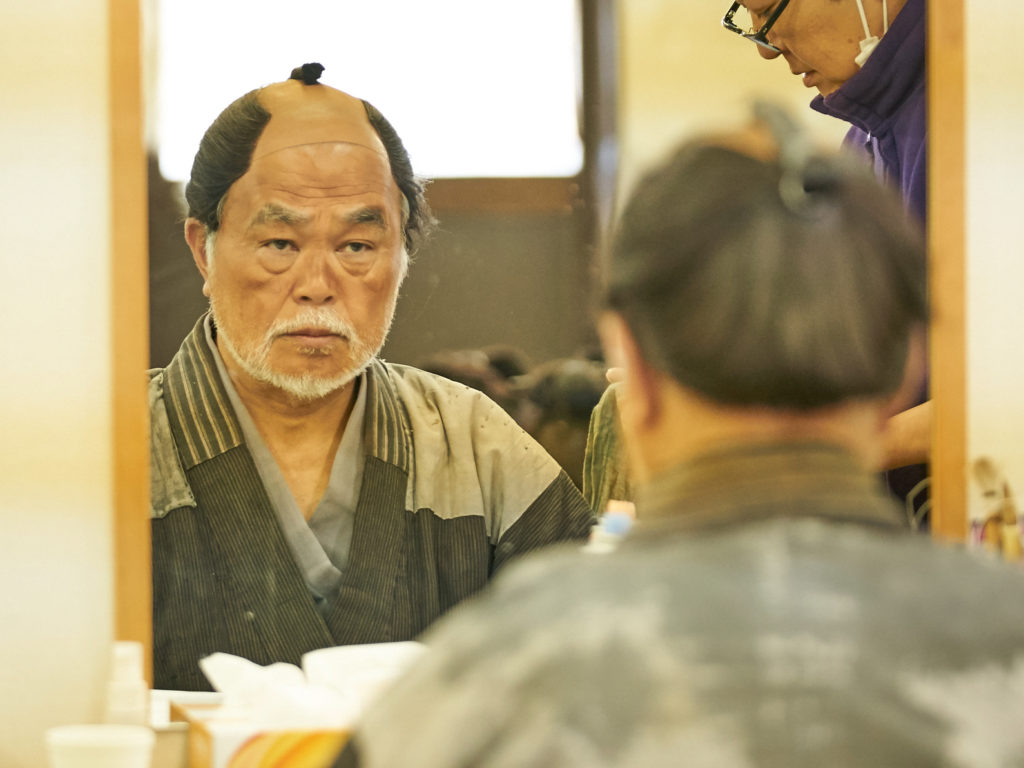 Canadian novelist Robertson Davies describes “Fifth Business” as those roles that —  while they may never lead — are “nonetheless essential to bring about the recognition or the denouement.” This attitude is seemingly shared by the late master director Nobuhiko Obayashi, who opens the mockumentary Extro by expressing his gratitude for the members of the film set who put in their all in terms of emotion and presence into the miniscule screen time that they are afforded.

The title of Murahashi’s film comes from a portmanteau offhandedly made by Obayashi of extra and maestro, and this reverence for the background actors and scene fillers, who never get a close-up or even a line, sometime permeate his entire film, for better or worse.

Set mostly at the famous Warp Station Edo, which is a permanently standing set that recreates a village in the Edo period and is frequently used in television and film productions, Extro is a probing look at the life of dedicated extras and the struggles, comedic or tragic, that they face working at the edges of the screen.

Mostly centred on veteran extra Kozo Haginoya,  whose love of the movies compels him to take these minor parts, the film is a seemingly honest and insightful commentary on the experience of a film extra in the Japanese industry, wherein (much like in the West) it’s not lucrative enough to be your sole employment. We follow Kozo’s unfortunate experiences working on a jidai-geki TV drama (The Claws of Edo, made up for the film), which Murahashi paints with both humanist pathos and cringe comedy.

The intrigue comes from the accuracy and faithfulness of the experience in Murahashi’s dramatization. A notable scene that manages to hit a masterful balance between that comedy and pathos is when poor Kozo is forced to sing a song in the background for 10+ takes straight, due to no fault of his own (only for an out-of-focus sliver of him to actually appear in the show…which is inevitably cancelled overall).

The film works on two levels, both as this personal recount of experiences working on set as an extra through Kozo and as a legitimately informative information doc on the inner workings of the extras branch of the film and television industry. Of course this side is played up for the sake of comedy, but the heart of Extro remains in the right place in wanting to hold an appreciatory spotlight on these unsung heroes of film productions, who show up, do what their told, and add depth to the film or TV show even if you don’t see it. The difference in tone between this film and, say, Gervais and Merchant’s Extras series is quite evident in that, despite similar tours through cringe comedy, Extro never looks down at the role of the extra.

If it were to have stayed focused on Kozo as this humanist centerpoint to mold the poetic waxing of the unsung extra, the film could have been a strong, focused, emotionally driven comedy. However, for whatever reason, Murahashi decides to expand his web of focus onto the industry itself, and Extro becomes decidedly scattershot in execution.

Almost exactly at the halfway point of the runtime, the film shifts perspective onto two special investigators who join an agency for extras in a sting operation fora drug dealer who is employed by a similar agency. The film becomes noticeably more silly and less realistic (which is important to the overall effect of a mockumentary), as the hapless investigators bumble their way through film sets and acting classes, and all that humanist pathos ingrained earlier in the film dissipates from memory.

The turn to this maximalist approach of the extras industry is somewhat baffling, as Extro had such a good thing going for it in the hapless, empathy-generating charm of Kozo. While the absurd ramping up of Extro’s comedy does not dilute the endearment of Murahashi’s intent, the enthusiasm dwindles slightly as it reaches its feel-good ending, threading in local legends and cameos of industry legends for the sake of throwaway jokes and single-scene bits. Nevertheless, Extro remains an insightful and necessary film that, when it’s able to find that balance, knocks it firmly out of the park.