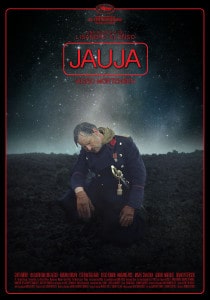 Toward the end of Lisandro Alonso’s latest affair of sweeping ambiguity, Jauja, a character is explaining a condition currently affecting a canine – a nervous reaction of sorts, a hot spot, brought about from the animal’s inability to understand something causing him to scratch himself furiously, irritating himself, injuring himself. This canine could easily be a representation of my own attempts at interpreting the ambiguity-rich quasi-narrative of Jauja, if only there was enough substance to warrant such sustained contemplation.

Perhaps the task of deciphering the film’s significance parallels the journey of our central character, Gunnar Dinesen (Viggo Mortensen), through the mythological swath of verdant desert that is Jauja, where looking for any meaning is akin to the fruitless searches for the abundance and happiness promised in the myth of Jauja, described to us from from the outset – aimless and building toward disarray, meandering through the expansive void, desperate and directionless.

Given the vastness of Jauja’s empty spaces, both literally and figuratively, any interpretation one could conceivably conjure in one’s mind could, in essence, give credence to the film’s otherwise veiled meaning. Bits and pieces of narrative importance do lay scattered throughout the film’s redundant terrain, some straightforward (yet still opaque) and others manifesting themselves with a surrealist bend, mercifully reinvigorating the narrative with the intrigue and mystery that appeared to have wandered off shortly after the film began.

Adding greatly to Alonso’s cinematic myth construct is the cinematography from (Aki Kaurismäki regular) Timo Salminen, capturing the incredible scenery of the Patagonian landscape in a series of static frames, utilizing the rounded edges of a 4:3 aspect ratio. The peculiar presentation, coupled with the surrounding lush emptiness, initially adds a certain enigmatic air to the glacially paced expedition, seemingly existing in an otherworldly, dreamlike interpretation of a distant memory. Even the looming night sky appears artificial and ethereal. Unfortunately, the enigmatic air quickly dissipates, steadily replaced with monotonous frames of traversing and searching.

What begins as a promising excursion shrouded in mystery and hidden meanings, Jauja rapidly reduces itself to nothing more than a tedious vacation slide-projector presentation, skirting with the two-hour mark through picture after picture of grass and rock. Even the story’s late inclusion of surrealism (through an intermingling interaction of past, present and future) fails to fully revitalize the monotony. Any amount of benefit amassed from this surrealist development is swiftly negated as Alonso employs the laziest of all twists, rendering everything essentially pointless. Perhaps, the adage “it’s not about the destination; it’s about the journey” is being employed, although, regrettably, both remain tiresome and uneventful.