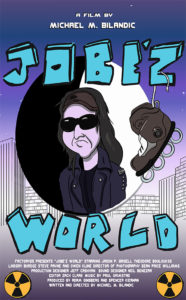 Experiencing Jobe’z World is akin to being the only person at a party who never got the hit when the recreation drugs were being liberally being passed around. You remain as perceptive as ever in your responsible sobriety while the asinine ramblings of your friends, who swear to you they have just discovered their third eye in their red solo cup and tapped into the frequencies reverberating from the “grand nothingness in the cosmos,” is repeatedly inflicted onto you.

This hyper-awareness of the ostentatious quality of a psychedelic high is the mood that permeates Michael Blandic’s film, as expressed through the reverb-heavy narration of his titular character skating into the underbelly of New York’s “freak scene.”

“Swarm Intelligence is akin to how bees all work together to make those hives,” says the pontificating journeyman and drug runner Jobe (Jason Grisell) as he makes his deliveries. “Humans are the same; we just go with the flow and somehow function.”

While the script becomes little more than a repository for these profanity-laced musings performed by Jobe and the extensive list of oddballs he encounters on his route, Jobe’z World as a whole lacks the sardonic edge to turn any of these vacant thoughts into laughs. One assumes we are meant to be laughing at Jobe and the characters he encounters for spouting these insufferable ruminations at length, but Blandic never positions his audience properly in relation to these characters.

Somewhat functioning as a journey film and sightseeing tour where the script constantly hops between some of the most “groovy” weirdos New York’s outsider culture can offer up, we bear witness to their inane (possibly improvised) rantings without the film deciding if they are objects of mockery, endearment, fascination or otherwise. Blandic’s comedic conjecture seems to be stoned philosophy and incessant babbling is inherently funny, when really all it does is make his one-hour runtime feel like an eternity. 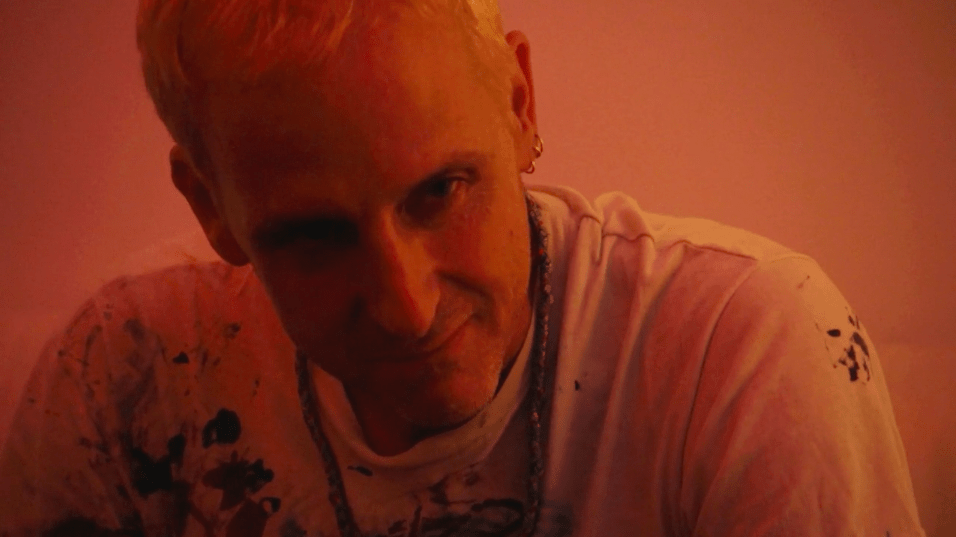 At the very least the cast seems to be enjoying themselves, reciting this nonsense with their quirky affectations turned up to 11 like they are trying to out-act the character in the previous scene. I imagine the project would have looked appealing to a working actor because signing on guaranteed you an incoherent monologue to blather to Jobe and the freedom to take it to whatever odd heights you wished.

Jobe’z World shows aspirations to high camp in these moments, such as when Jobe delivers narcotics to a beloved “thespian” (Theodore Bouloukos) who gives us a scenery-chewing taste of his work before his overdose becomes the focal point of the plot’s back half. Again, what prevents this from being a farcical oddity of indeterminable quality is the script’s tonal hiccups.

As Blandic tries and fails to take a page out of the Safdies’ handbook and position his film as a race against time through the neon-lit underside of New York’s seedier culture, the lingering sense that you’re watching a comedy gets further and further obscured. The jokes in its comedic arsenal can be reduced to finding the oddball characters slightly amusing and the half-assed, spacey pontifications of Jobe perhaps charming, but that is a stretch.

The challenge of Jobe’z World is getting yourself in the mind of its writer-director and figuring out what he was intending for this incoherent, cinematic ramble. Where half the film is played like a trippy journey through Manhattan, rubbing elbows with its weird natives and the other a panicked test of survival to outlast the night, I am not entirely sure how Blandic intends me to respond.

There are moments of interest in the poorly lit neon halls of Jobe’z World, but all of its attempts at being strange and off-putting come across too calculated to be actually entertaining. What Blandic was going for with the drug-dealing odyssey of Jobe is never made clear, and the excessive screen time he takes up with extensive, repeating scenes of characters prattling on about this, that and the other thing ensures it never is made clear.

The thing about being the only sober one at the party is that, sure, you get to enjoy the spectacle, but you also have to clean the mess, drive everyone home and endure an endless stream of trivial conversation that the other party will never remember. Watching this film turns you into that person and makes you wonder if it is ever worth it.