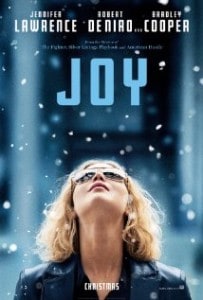 David O. Russell is adept at chronicling dysfunction and letting the interpersonal chaos form his characters and inform their motivations. That skill is a good match for quasi-biopic Joy, though the depths of social impairment and conflict here go about as deep as puddle requiring the use of a Miracle Mop, the invention central to this story of its creator.

The script is almost tight to a fault, hitting all of the necessary beats to provide us the basics without a whole lot of color and remaining at emotional flat-line. The talented cast is game and wrings a few laughs from the rhythmic banter, but in the end it feels like a lot of wasted effort.

A prologue introduces precocious tween Joy, making a diorama and establishing her as strong and freethinking. Now bogged down by adult responsibilities, grown Joy (Jennifer Lawrence) is using her problem-solving prowess to simply run a crazy Long Island household. She’s got two young kids, her mother (Virginia Madsen) lays in bed all day watching soaps, her musician ex-husband (Edgar Ramirez) lives in the basement, and her father Rudy (Robert De Niro) is moving in after a failed relationship.

Still sour that her dog collar invention was stolen before it could be patented, Joy is determined to control her fate after coming up with an idea for a self-wringing mop. During the second act, the focus becomes a bit too procedural. Joy gets financial backing from Rudy’s new squeeze Trudy (Isabella Rossellini, goes through the process of finding manufacturers for the various mop components, and turns her father’s auto shop into a factory. Presenting the idea to Neil (Bradley Cooper), an executive at the fledgling QVC network, she faces corporate roadblocks before breaking through and achieving astronomical sales. From there, the struggle becomes controlling her young company while also keeping her family in line. 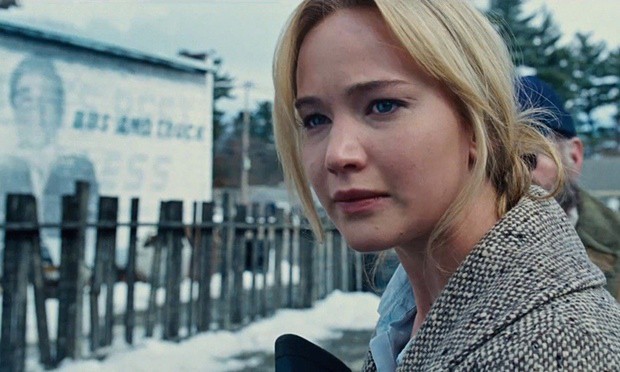 Lawrence is magnetic as usual; she just doesn’t have a lot of nuance to explore as the film stomps from one staged interaction or expository info dump to the next. The few scenes that are allowed to breathe a bit, including Joy’s annoyance with the inefficiency of cicadas as she reads to her daughter or her nervousness turning to savvy during her first QVC appearance, are highlights. Granted, part of the point is show how spread thin this woman is, but the bits with her family and their assorted quirks come off as episodic rather than cumulative influence. Also because of this, the supporting characters barely register other than as temporary foils to for Lawrence to bounce off of.

There’s also some dissonance in the brass tacks business story and the treatment of the material as a sort of working-class fairytale. A lot of attention is paid to profit margins, production practices, and working with a parts supplier. This doesn’t always jibe with the earnest voiceover provided by Joy’s grandmother (Diane Ladd), the overly melodramatic soap opera interludes, or the almost otherworldly snow motif that runs through the picture. The symbolism of Joy’s Christ-like wounds on her palms after using a manual-wring mop is a bit much.

The design of the film feels inefficient, never providing enough time for investment in the characters or the machinations of Joy’s rise. The climax and epilogue are especially rushed, ending with obligation rather than satisfying resolution, and cementing Joy’s slightness.