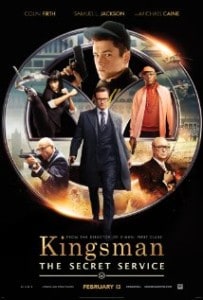 Kingsman: The Secret Service makes zero logical sense, which would be perfectly fine if its outrageousness were more inspired. Unfortunately, the film winks so often and so long it loses sight of how to make the cheekiness, the action, and the narrative congeal effectively.

Based on a comic series by Mark Millar and Dave Gibbons, the material certainly fits the sensibilities of director and co-writer Matthew Vaughn, whose filmography includes X-Men: First Class and Kick-Ass. The synergy works early on and Kingsman starts fast and full of colorful fun, but the flurry of quips, fists, and bloody violence devolves into a joyless mess. It’s hard to maintain a fervent high when the story casually weaves in domestic violence, simulated dog murder, child endangerment, and other general hatefulness – asking us to be moved by it all one moment and laugh at it the next.

Eggsy (Taron Egerton) is a punkish teenage Londoner whose life was untracked as a toddler when his honorable father was killed and his mother fell in with an abusive gangster-type. In a legal bind, Eggsy is assisted by Harry Hart (Colin Firth), who feels he needs to make amends and sees potential in the brash young man. With little vetting, Harry brings Eggsy into the super-secret spy organization of Kingsman, where the agents are named after the Knights of the Round Table and act like gentleman. Until, that is, it’s time to use ingenious weaponry to annihilate adversaries. Put through brutal training by Merlin (Mark Strong), Eggsy develops a kinship with fellow recruit Roxy (Sophie Cookson) before being thrust into a mission to stop megalomaniac tech billionaire Richmond Valentine (Samuel L. Jackson) from executing a silly nefarious plan. 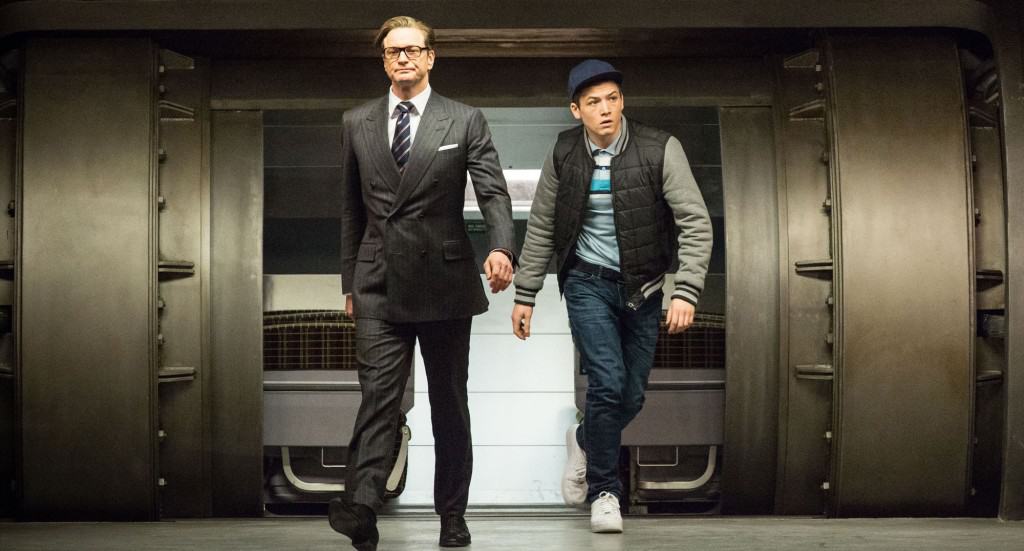 Kingsman constantly pokes at the tropes of spy movies, but also falls victim to them and gets lost in the weeds of espionage and over-the-top action. One of the best scenes finds Firth and Jackson seated at dinner and discussing their affinity for old Bond movies, making their intentions clear without explicitly saying anything. On the flip side, when Kingsman leader Arthur (Michael Caine – who else?) asks Eggsy if his dog is named JB after James Bond or Jason Bourne, it’s a more representative example of the on-the-nose insolence that eventually turns the film into a grating experience.

As far as the action goes, it’s fun to watch Firth play against type and physically dominate a gaggle of foes – the first time. By the time he’s brainwashed and ravaging the congregation of cultish church in “Kentucky, U.S.A.” – as the title tells us – with a frenzied string of gunshots to the head and various impalements, it’s already stale. The law of diminishing returns applies to the numbing carnage in general terms, also. Valentine’s amputee henchwoman Gazelle (Sofia Boutella) introduces herself by slicing a man in half with her prosthetic sword feet; there’s really nowhere for her to go from there.

Vaughn tries mightily to inject frenzy and fidelity into every frame, and Kingsman gets more repellant as it goes along. At the height (or low) of the action, heads of state and other powerful global citizens have their heads explode into fireworks in a supposed-to-be-funny montage. This is juxtaposed with a scene of a hypnotized mother violently hacking through a door with a butcher knife in attempt to murder her infant daughter, which is decidedly not funny. In trying to be several things at once, Kingsman winds up a convoluted, dour dud.