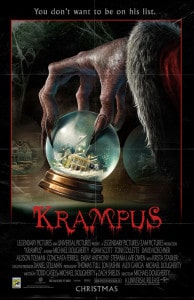 Michael Dougherty hit a holiday-themed horror sweet spot with his 2007 anthology Trick ‘r Treat, finding the right balance of wit and chills. With Krampus, the director/co-writer flips the calendar from Halloween to Christmas and attempts to breathe Amblin-esque life into the dark figure from Germanic folklore. There’s so much cinematic potential with the character, described as Saint Nicholas’ dark shadow sent to punish the bad children, but it’s not quite realized here. Basic concepts are spread thin at feature length and there’s a failure to fully capture either the fearsome or farcical aspects of the myth.

Suburban couple Tom (Adam Scott) and Sarah (Toni Collette) are prepping for the holidays. He’s overworked, she’s stressed out, teen daughter Beth (Stefania LaVie Owen) is wrapped up with a pot-smoking boyfriend, and their young son Max (Emjay Anthony) is concerned with preserving the magic of Christmas with his fatigued family. The strain of the season is inflamed with the arrival of Sarah’s sister Linda (Allison Tolman), her husband Howard (David Koechner), and their brood of ill-mannered kids. If the parallels to Christmas Vacation and the Griswolds weren’t obvious enough, there’s even a rude aunt (Conchatta Ferrell) in tow. Fed up with infighting and bad behavior, Max rips up his letter to Santa, unleashing a blizzard, and the demonic Krampus, on his neighborhood.

The setup is appropriately broad in its ridicule of modern Christmas spirit. The soothing sounds of Bing Crosby play over an opening credit montage of shoppers fighting over the best deals at a big box store. Surviving the mob and back home, Tom takes work calls, Sarah hangs the family picture with Santa Claus (with Santa checking out her daughter), and the arrival of the cousins is looked upon with dread. Everything is being done out of obligation rather than festive cheer. 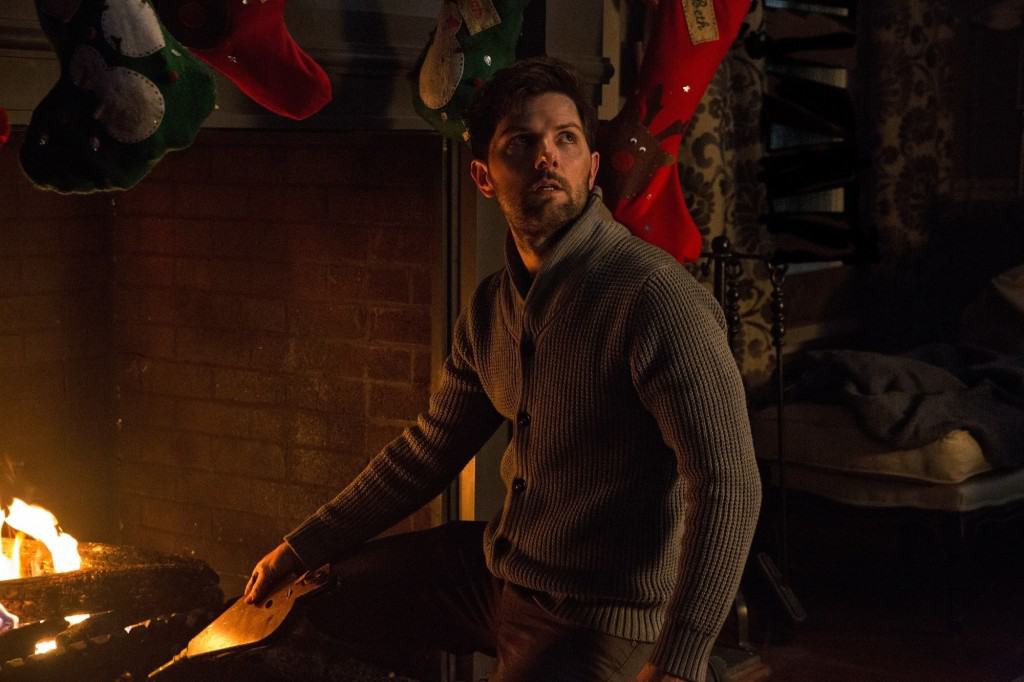 The bad tidings conjure Krampus, first shown in horned and hoofed silhouette, leaping heavy-footed from roof to roof and draped in chains. It’s a scary image that begs for exploration and promises carnage. Indeed, the mystery is explained in a well-done animated tale, narrated by Tom’s German mother Omi (Krista Stadler), who encountered the beast as a child.

Sadly though, Krampus does little actual marauding. The dirty work is saved for his minions, including gingerbread men and demonic toys that are a mixture of nightmare imagery and impish charm. The desired tone is something akin to Gremlins, though nothing here approaches the amusement of those hellions singing along to Snow White or the grossness of that film’s gooey kills. The design of Krampus is rather slick – looking like a cross between a goat, The Ghost of Christmas Future, and a chocolate Santa with a melted face. His pagan-mask wearing “elves” and briefly glimpsed sleigh are also well done, though there’s not much for the well-rendered creatures to do or stand for.

There’s also a disconnect between the quippy familial interactions and the desperation of their situation. Scott, Collette, and Koechner deliver their lines with some gusto, but they don’t have much to work with. With no real meat on the bone, everything begins to feel repetitive – the boorish behavior, the loud thumps on the roof, explorations of dark rooms or the harsh wintery landscape, and scenes of suspense with little payoff. The minutiae become grating, with little details like Max translating the German of his grandmother growing monotonous.

Lacking eerie pizzazz, wishy-washy on the rules of Krampus engagement, and uneven in tone, Krampus goes through obligatory motions without taking advantage of its ghoulish inspiration.