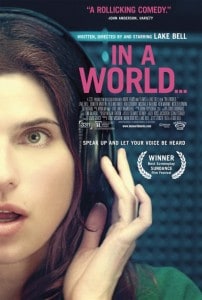 In a world dominated by male writers and directors, Lake Bell has made her voice heard. Bell wrote, directed, and starred in her debut feature about a struggling female vocal coach competing in the voice-acting big leagues to be the successor of legendary voice talent Don LaFontaine.  In A World… expertly takes advantage of the rich comedic backdrop of Hollywood’s voice-over scene to give humor and a sense of specificity to what would’ve otherwise been an ordinary rom com.

We open on Carol, daughter of the famous vocal artist Sam Sotto (Fred Melamed).  She struggles to follow in her father’s footsteps, but without his support, she’s left doing fill-ins for a local recording studio and coaching Eva Longoria on her cockney pirate accent. Carol finally nails one of these fill-ins and becomes one of the top candidates to voice the trailer for “The Amazon Games” –a quadrilogy about fierce female alien warriors battling prehistoric cave men/clone hybrids. Of course, her running mates include her misogynist father and the suave womanizer Gustav (Ken Marino). On top of it all, Carol’s sister, Dani (Michaela Watkins) is ruining her marriage and Carol is completely oblivious to the fact that her boss at the recording studio (Dimetri martin), is completely in love with her.

This comedy is not laugh out loud funny, and, like most rom coms, you can predict the ending without even seeing the movie, but it will consistently keep you smiling and intrigued throughout. Bell’s script, which won the Waldo Salt Screenwriting Award at Sundance, is not particularly profound in terms of encouraging gender equality in the industry, but it does have moments that are impactful and endearing, especially in terms of character.

Fred Melamed’s performance feels overbearing and overplayed, but the rest of the cast is extremely distinct and likable, with idiosyncratic characters that aptly demonstrate their own desires and jealousies. While Carol is clearly derived from the stock character of the ‘young woman trying to find herself,’ Bell gives her a quirky, charming edge that prevents her from becoming annoyingly cliché.

Overall, In A World… does not disappoint. It’s not the funniest film of the summer nor the best in its genre, but it does stand out as a memorable, watchable, and slightly more feminist-friendly romantic comedy.