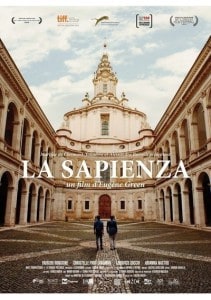 At once a history lesson via travelogue and a relationship drama of sorts, Eugène Green’s latest film, La Sapienza, oscillates between scholarly discourses on the subject of Roman Baroque architecture and the importance of remembering and incorporating elements of the past. What starts out as cold and mechanical slowly warms up, becoming enlivened from the same welcoming light that is discussed at length within.

Celebrated architect Alexandre Schmidt (Fabrizio Rongione) and his wife, Aliénor (Christelle Prot Landman), currently find themselves emotionally adrift, each in their own respective forms of personal and professional malaise – the root causes of which remain undisclosed for much of the film’s duration. Seeking inspiration for the next chapter in his architectural career, Alexandre decides to return to Italy, to the works of Francesco Borromini and Gianlorenzo Bernini.

The couple goes their separate ways after encountering the brother/sister duo of Goffredo (Ludovico Succio) and Lavinia (Arianna Nastro) during their stop in Stresa with Goffredo (a budding architect himself) accompanying Alexandre on his research tour of Ticino and Rome, while Aliénor remains to care for Lavinia, who suffers from a puzzling nervous condition resembling wasting.

La Sapienza continues to shift between to the two separate, yet related, narratives as the young counterparts impart the insights that both Alexandre and Aliénor have been searching for during their trip. Haunting pasts are unveiled giving rise to context and explaining the root of the emotional disconnect between Alexandre and Aliénor and the gulf of silence that has grown between them over the years.

An endless series of discussions, presented in shot/reverse shot, revolving around the ghosts of past, light and space, and sacrifices, La Sapienza contains a number of subjects and ideas that parallel each other throughout. None of the dialogue is extraneous as the characters attempt to reconcile the past with the present, while the topic of light and its importance takes center stage. Green presents the rejection (or absence) of light as the root cause of the characters’ melancholia and personal impasses.

The light of which Green speaks is demonstrated continuously through the concentrated camera movements of Raphaël O’Byrne’s cinematography, displaying the grandiose, ethereal beauty of these architectural structures; occasionally breaking from the rigid, stiltedness of the character interactions to display the historical edifices through graceful frames tenderly surveying the complexities of the craftsmanship at hand. There is harmonious mix of 14th century and 17th century ideas, as Sant’lvo alla Sapienza seems to embody the balance of past and present Green is championing. The architecture incorporates the past within the constructs of progress without cutting off the history of a culture; thus, prolonging the culture’s existence and relevance, instead of leading to its outright elimination or, at the very least, disconnecting it from the present, leaving it to atrophy.

What, at first glance, appears to be simple story of one man attempting to salvage his career and his marriage turns into a complex entanglement of history, spirituality and Baroque architecture. Eugène Green presents the simple, idyllic idea of living harmoniously with the specters and remnants of the past with grace and compassion.