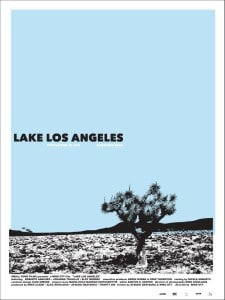 The opening shot of Mike Ott’s third and final installment of his Antelope Valley Trilogy, Lake Los Angeles, glides into his narrative arch from the center of an open road, the dust trail illuminated in a flurry. A young girl’s voice can be heard over the quietly stunning image, whispering a story which settles, along with the camera, on the rabbit in the moon.  From the dusty floodlit haze, we break to the image of the back of a man’s head, precisely lit and composed, seen trying to alleviate his solitude with a prostitute.  It’s an emotionally gripping film with a naturalistic tone, following the interwoven stories of its two star-crossed protagonists. The subtle forces at work in this echoing tale are a concoction of the way images accumulate meaning, using Malick-esque narration sequences and repetition of phrases and spaces, all to the gain of the understated story.

Cecelia (Johanna Trujillo) is a young girl who has just crossed the Mexico-U.S. border and arrives at an immigrant drop-house. Francisco (Robert “Sanz” Sanchez) is a kind-hearted but haunted Cuban immigrant who houses people like Cecelia until their loved ones can collect them, while he is stagnating on his own. Unfortunately Cecelia is never collected, and in her struggles to find her father, she happens upon a house, beginning a storyline that harkens to Víctor Erice’s 1973 Spirit of the Beehive.

While Cecelia and Francisco are geographically separated, they continue to occupy mirrored emotional spaces. And as we pivot back and forth between the two, we start to witness a compelling poetic force delicately projecting their stories into one another’s lives.

Stunning performances by both Trujillo and Sanchez, along with a well-written script that plays out in a captivating landscape, make this an extraordinary movie. The sincerity of the characters and layering of emotion feel natural and are well crafted, albeit there are a few moments where danger is present but it doesn’t actually feel that dangerous.  This effect of a slight flattening in potential emotional states which limits the tone or color of the performances is obviously a choice rather than an error, but the film would have benefitted from dramatic and understated poles in performances having a bit more range.  Where contrast between writing and image are intelligently interwoven, it’s opportunistic contrast that performances seem to miss.

That said, the naturalistic approach to Ott’s process is a feat in itself, and his sense of timing leaves us not only wondering what will occur just after the last scene in the movie, but also what occurs after this third film in his trilogy. Until then, we are left to bask in the ambiance and glow that is Lake Los Angeles, but that’s not a bad note to end on, not a bad one at all.