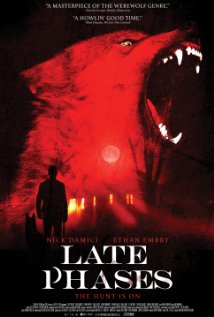 Late Phases shows its cards early, establishing a sketch of a main character and the monster he’s pitted against. The setup shows promise with a no-nonsense, bloodthirsty, practical effects werewolf stalking a retirement community, but instead of using the unique setting for metaphor and/or mayhem, the film grinds in its transitions between tame terror and flaccid drama. The man-in-suit is amusing for all the wrong reasons, while the dime-store theater is stretched well beyond its depths. It all makes for an experience that taxes one’s patience instead of their nerves. There’s little that elicits a reaction other than boredom, save a few unintentionally laughable dialogue selections and perplexing story choices.

Ambrose (Nick Damici) is a blind, gruff Vietnam vet being moved into the Crescent Bay retirement community after the death of his wife. Accompanying him are his son Will (Ethan Embry) and his faithful guide dog Shadow. The first ten minutes of the film are filled with an inordinate amount of close-ups of the German Shepard, complete with smiles and adorable panting, which come off as frantic attempts to get us attached to this dog in short order. Wonder why that could be.

On Ambrose’s first night in his new townhouse, his neighbor is brutally murdered by a rampaging werewolf and the reasoning for Shadow’s early screen time is provided. Ambrose, of course, cannot see the attacker, using his heightened other senses to deduce he’s “big” and “smells like a dog.” Upon overhearing that these attacks happen every 30 days or so in Crescent Bay, Ambrose seems to figure out exactly what is going on. For the following month he prepares for a showdown with the beast.

What’s most shocking about this supernatural tale is how the authorities and townsfolk are either too dumb to know what’s going on, or just accept it. We know the latter isn’t true though, because whenever contact is made with a werewolf everyone reacts with shock and fear. The official reason the cops give for the attacks – endorsed by the script without a hint of irony – is that the community is close to the edge of the woods and the elderly can’t defend themselves, so wild animals have easy pickins. Seems legit. smashed through a set of glass French doors, ransacked an entire living room, plowed through a wall, left extensive claw marks on the wall (complete with left behind claw), and eviscerated an old woman. Oh, and left a trail of bloody footprints. And this happens every 30 days (whenever there’s a full moon) like clockwork.

Ambrose may have his reasons for staging a one-on-one battle – revenge for his dog, the mindset of a stubborn solider – but there’s no narrative reason for us to follow along. Damici does a fine job of projecting Ambrose’s harshness from behind several layers of aging makeup, but he’s not given enough to brood or grouch about. He regrets not being the father he should’ve been, but a blunt voicemail played during the climax doesn’t register as catharsis. Ambrose starts attending church and converses with Father Roger (Tom Noonan), but the somewhat hip, smoking priest and the veteran only manage clichéd discussions about faith, family, and war. It’s too bad too, because one could envision Damici and Noonan having memorable exchanges with better material that touches on relevant themes.

Effects are as unimpressive as the script, with the werewolf looking more unrealistic than any number of ‘80s music videos – not limited to “Thriller” or “Bark at the Moon.” Director Adrián García Bogliano and his team manage a good gore moment or two, including an iron lung that spurts blood from a decapitated body, but there’s not enough inventive carnage to pump life into the proceedings.

More disappointing is a complete lack of thematic resonance. Late Phases suggests an awareness of facing one’s mortality, revenge, and fending off the symbol of your demise, but has no actual ideas about any of it. No matter that the film tries real hard to play it straight, Late Phases isn’t about a wounded man of advanced age coming to grips with his current plight and his past sins. It’s about a grizzled blind guy waiting around for a month to shoot a werewolf.