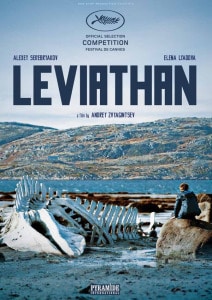 Russian writer/director Andrey Zvyagintasev’s Leviathan is at once a modern reworking of the Book of Job and a thinly-veiled indictment of modern Russia as the film’s main character desperately attempts to fight back against the undeniable corruption and breadth of authority possessed by the local powers that be, all while his painstakingly-constructed life crumbles around him.

Kolya (Aleksey Serebryakov), along with his wife Lilya (Elena Lyadova) and his son (Sergey Pokhodaev), has been living on the outskirts of a small coastal town his entire life. This picturesque lifestyle achieved through hard work and dedication becomes endangered once the local mayor (Roman Madyanov) decides that Kolya’s plot of land is the perfect place to construct a luxurious mansion for himself.

Quickly, Kolya finds himself churning helplessly in the swirling waters of absurdity as he ambles from one defeat to another. Illogical defeats in the appeal courts (as a judge briskly rambles through, at length, the verdict in an inflectionless dictation); called-upon confidants and loved ones with ulterior motives that lead to more personal troubles; random sermonizing regarding the tests of God – all of these things spiral around Kolya while an apparently unending river of vodka flows through the proceedings, leading to an ever-present atmosphere of unease and impending catastrophe.

Zvyagintasev continues to display his directorial proficiency with his effortless ability to infuse his complex character studies with subtle, yet richly developed, layers of meanings and intentions while the visual unfolding of the narrative (through strategically placed cuts) suggest ambiguity as conclusions are left dangling for various durations, some resolved down the road whilst some remain open-ended. heightening and maintaining the interest level throughout.

Case in point, in the vodka-sponsored birthday bash (complete with rifles and kebobs) that ends with a choking accusation leading to an off-screen confrontation ending with Kalashnikov fire before abruptly cutting to a conference between the mayor and a priest. Or, the entirety of the film’s closing developments as long-time friends question Kolya’s behavior, ultimately calling for a re-examination of the film’s main character; or, perhaps, we are merely witnessing more of the same as the long-arm of corruption extends its reach.

Zvyagintasev’s Leviathan works on a number of levels due to the carefully-curated script (co-written with Oleg Negin), along with the universality of the film’s themes focusing on the helplessness of the less powerful in the face of corruption and abuses of power. A definite Russian film in the sense of its topics, yet approachable in its execution.