It’s hard to decide which of the Gerard Butler films released in the last couple of weeks is more rooted in reality. In Gods of Egypt, the actor plays a towering Egyptian god who bleeds liquid gold (and has a bit of a Scottish accent). In London Has Fallen, he plays a U.S. Secret Service superhero (with a bit of a Scottish accent) operating inside an action movie that’s completely tone deaf, laughably sophomoric, and crafted with a complete lack of finesse. It tries to be escapist bombast and relevant drama simultaneously and fails miserably at both. In my estimation, the battle for authenticity is a dead heat.

After the events of 2013’s Olympus Has Fallen, in which he saved The White House, and by extension the country, Agent Mike Banning (Butler) is mulling serious life changes. His wife is about to give birth (of course) and he’s drafting a resignation letter. Before he can quit, however, he’s pulled into One. Last. Assignment. The British Prime Minister has died mysteriously, and Banning heads the security detail for President Asher (Aaron Eckhart) in his travels to London for the funeral. Just before the service is to begin, terrorists masquerading as police and first responders stage an attack targeting all of the world leaders in attendance. Behind the plot is arms dealer Aamir Barkawi (Alon Aboutboul), who’s out for blood after a U.S drone strike meant to take him out killed some of his family members.

What follows is a very nuanced exploration of U.S. policy and terrifying terrorist propaganda by way of armed combat. Just kidding; what actually follows is Banning brutally stabbing and shooting down generic brown-faced baddies while uttering lines like “go back to fuck-head-istan” and “in 1,000 years WE’LL still be here and all of YOU will be long gone!” What does that even mean?

A complete lack of respect for the politics and emotions of the situation could possibly be forgiven if London Has Fallen positioned itself as absurdist and handled the brutality with well-designed action set pieces. It doesn’t. The effects include some of the worst representations of explosions (of which there are many) you’re likely to see in a non-direct-to-DVD-or-VOD feature. I think the combat looks more realistic in some of those free war games you can download in the App Store. That’s only slight hyperbole. When the first car bomb goes off, the fireball is GIF-level convincing and just hovers in the sky. 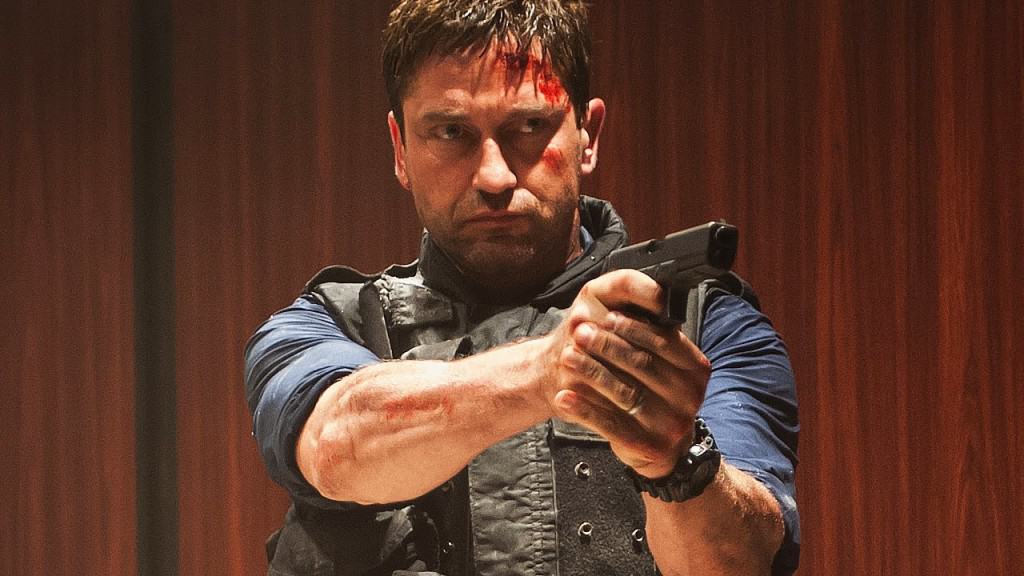 There is precisely one semi-competent action sequence that involves Banning and a team of soldiers in an alley shootout with terrorists. Presented as a single take, it makes the architecture of the action interesting for a brief few seconds, even if there is absolutely no context. Other than that, London could be any place with dark streets and concrete warehouses suitable for Banning to mow down adversaries in repetitive fashion. Say what you will about Antoine Fuqua, but at least he can stage an entertaining action scene – including a few in Olympus Has Fallen. Taking the directing reigns this time is Babak Najafi who mistakes volume of boring violence for thrills.

Perhaps some of the dollars saved on the shoddy effects and set pieces was spent on a pretty impressive list of actors in supporting roles, including Angela Bassett, Morgan Freeman, Melissa Leo, Robert Forster, and Jackie Earle Haley. If so, the money wasn’t well-spent. Most of these actors are only required to sit and stare anxiously at a TV while watching the attack unfold. I couldn’t tell you who any of these people are (except Freeman, who is the Vice President), even though everyone – and I mean everyone – is given an on-screen title as the camera moves around the war room. That goes for all of the U.S. and English officials.

Apparently none of the four credited screenwriters (not a good sign) could be bothered with pesky character-building. There’s too much concern with standard twists (a mole!), the lamest of one-liners (Banning affectionately hits the president with a gay joke – hilarious!), and just getting Banning and President Asher to the next round of combat by any means necessary (we’ve got to go underground into the tube! We’ve got to get in that bulletproof car!), for anything to connect in a meaningful or entertaining way.

London Has Fallen is the most basic of basic actioners. The majority of its run time is a tiresome slog through dark streets as bullets fly and blades pierce flesh (and eyeballs). Changing gears to jingoist mode, the climax dares to pose as a patriotic fist-pumper. But we’re just left confused, and happy that this madness is over.