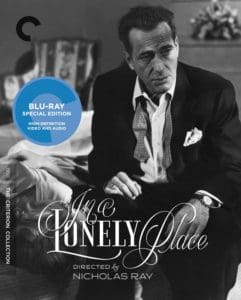 This product was provided for free for the purpose of this review.

1950’s In a Lonely Place marks the second film from Nicholas Ray’s oeuvre to garner the Criterion treatment (Bigger Than Life from 1956 being the other) and one can only hope that the Criterion Collection are working their way towards acquiring more of Ray’s work.

Not only is this iteration presented in a new 2K digital transfer, making the black-and-white cinematography provided by Burnett Guffey look phenomenal in crispness between shades, it also happens to boast a bevy of worthwhile supplements. The main highlights include a slightly condensed version of David Helpern’s 1975 documentary, I’m a Stranger Here Myself, audio commentary provided by film scholar and Professor of Cinema Studies at the Tisch School of the Arts at New York University, Dana Polan, and an essay from Imogen Sara Smith.

Helpern’s doc contains a mixture of standard talking-head conversations, featuring the likes of Francois Truffaut, Natalie Wood, and John Houseman, and candid, behind-the-scenes footage of Ray working and collaborating with his students from Harpur College on his farm in Binghamton, New York. A cigarette clinging to the edge of lips, an eye-patched Ray expounds upon the desired connection between the audience and a film’s protagonist as well as a litany of other philosophies and ideas. Captured in the midst of the candor is a wonderful stretch of rawness – Ray collaborating in real-time with his students, particularly Leslie Levinson, on a scene with the discourse getting heated as the shared passion is palpable. Helpern paints without pretense, presenting Ray as he is, in his own words.

Polan’s commentary has the feel of a lecture (a thoroughly constructed and articulate lecture), featuring an impressive range of information regarding the nuances found within the film’s screenplay, the gestures and expressions within Bogart and Grahame’s performance, and even illuminating thoughts on the subtle importance of the ancillary cast. One gets the sense that Polan has, perhaps, viewed In a Lonely Place an unhealthy amount of times given the breadth of his insights; a verbose recital of knowledge that never bores, always illuminating while seemingly exploring the film from every possible angle. It’s definitely one of the more educational commentaries I’ve experienced. 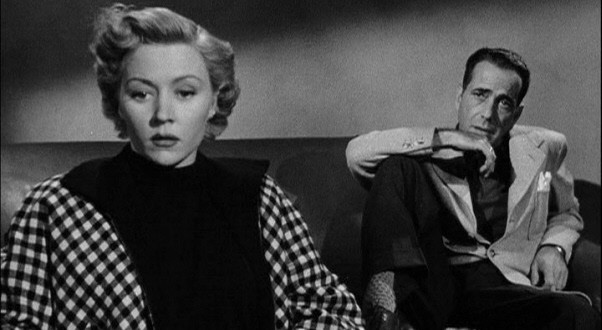 The other featured extras are of varying interest. A 2015 interview with Vincent Curcio (author of Suicide Blonde: The Life of Gloria Grahame), on the subject of actress Gloria Grahame, comes off as a gossipy rundown of Grahame’s personal life more so than a thoughtful rumination of her career. Curcio seems to focus on tabloid topics such as her penchant for plastic surgery or the dissolution of her marriage to Ray while occasionally detouring into her talent and her work.

Director Curtis Hanson (L.A. Confidential, 8 Mile) also joins in on the appreciation with a filmed segment that finds him visiting the real-life locations of the film while discussing the multiple meanings of the title and how it’s a dissection and indictment of Hollywood, among other topics.

A radio play version of the source material – Dorothy B. Hughes’novel – is attached as well; originally broadcast in 1948 as a part of the CBS Radio series, Suspense. Playing out over a single still from the film, it provides an alternative unfolding of the actions within In a Lonely Place as it plays out as a more faithful rendition than Ray’s film.