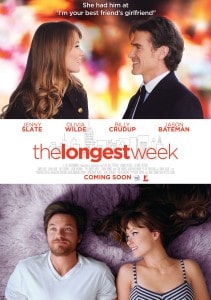 To say Peter Glanz’s The Longest Week wears its influences on its sleeve would be a gross understatement as the film promptly thrusts those influences, full-on, in the face of the viewer within the opening sequence of tableau shots consisting of typewriters and alarm clocks while Chet Baker saunters through the air, every frame whispers…Wes Anderson. And, just in case you didn’t catch that Wes Anderson influence flag flapping in your face, the typography displaying Larry Pine as narrator turns that whisper into a solemn utterance.

Yet, as the overwhelming, ultimately unnecessary, narration and Wes Anderson tinged tableaux slowly dissolve The Longest Week begins to find its own footing resulting in a surprisingly enjoyable tale of romance born out of betrayal. The story centers around Conrad Valmont (Jason Bateman) as he learns life lessons at the ripe old age of 40, all during the course of one arduous week that finds him evicted from his swanky penthouse, disinherited, broke and aimless ultimately pilfering a crush from his only friend. That only friend being Dylan (Billy Crudup), a contemporary artist and the crush being Beatrice (Olivia Wilde), a Jane Austen reader and frequent user of the subway.

Jason Bateman gets a chance to play slightly against type, seemingly enjoying himself while doing so as the habitual self-deceptor, affluent type born with the proverbial silver spoon in his mouth. He steals often, never takes responsibility, feels as though the world revolves around him and his genuinely unlikeable demeanor, yet over time he finally starts to feel things. The chemistry Bateman exhibits with both Wilde and Crudup is selling point of this film, along with the performances of all three as they all appear more than comfortable sparring with verbal wits, keeping the tone light and breezy throughout.

The comedy in The Longest Week is constant for the most part as the dialogue is brimming with post-modernist critiques, observations, the merits of Volvo gifting, and Conrad’s unending self-deception and justifications, only dipping into sentimental exasperation occasionally. These aforementioned aspects coupled with the lush visuals provided by cinematographer Ben Kutchins, who captures this indiscernible time period brilliantly with soft focus, smooth camera pans and meticulously crafted tableaux, just about make up for the fact that the film as a whole is simply derivative.

In all honesty, if your thinking about watching The Longest Week ask yourself this simple question – are you interested in seeing a film that cribs from Arthur, The Royal Tenenbaums and a number of Woody Allen films shot through the stylized lens of Wes Anderson? If the answer is no, then might I point out that those influences are mostly surface level and underneath exists a humorous, whip-smart script delivered perfectly by Bateman, Crudup and Wilde and framed wonderfully by Kutchins. Plus, hilarious-as-always Jenny Slate drops by for awhile.