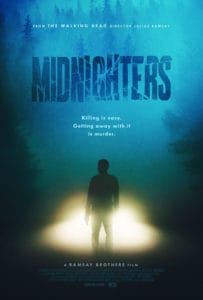 Our knowledge of thrillers tells us that an unhappily married couple driving down a country road at night is in for trouble, and indeed, Midnighters places its twosome in a dire situation. Following an inciting event, the economical, engaging neo-noir unfolds like an even simpler version of A Simple Plan or Blood Simple.

The efficiency of the pulpy suspense story is impressive, with director Julius Ramsay and his screenwriter brother Alston wasting nary a frame or line of dialogue, all while weaving in several twists that deepen the torment without feeling too big. This is a remarkable feature debut for both.

The doomed couple, banker Lindsey (Alex Essoe) and unemployed Jeff (Dylan McTee), leave a New Year’s Eve party neither of them is very interested in; Jeff even misses the countdown to have a smoke. On the way to their secluded home, Jeff hits a man walking in the middle of the road. After brief attempts to do the right thing are thwarted – damned cell phone reception! – and sure he’ll go to jail because he’s been drinking, Jeff convinces Lindsey to help him take the dying man back to their house and figure it out from there. Things, of course, snowball out of control.

Big complications arise naturally out of the desire for self-preservation. Lindsey’s freeloading little sister Hannah (Perla Haney-Jardine) is drawn into the mix in jarring fashion, garnering sympathy for another character caught in the wrong place at the wrong time. But things aren’t always as they seem on the surface in this well-organized mystery.

Even if we can guess where Midnighters is going at times, there are enough turns of the screw to keep us invested in the narrative and who will get through it alive. We may even change our minds a time or two about who deserves to come out of the ordeal intact. Everyone – whether it be Lindsey’s dealings at the bank, Hannah’s checkered history or Jeff’s desperation – has something they could potentially be hiding. They all flash motivations to act in their own best interest, whatever the consequences are.

The biggest threat is the least ambiguous, a wide-smiling guy who appears at the house, flashes a badge and calls himself, “Detective, uh… Smith” (Ward Horton). He definitely gives us someone to root against. Horton and Essoe are great in an uncomfortable questioning session that grows increasingly dangerous. Essoe makes us sympathetic for Lindsey throughout, infusing the character with appropriate levels of anxiety while also retaining a sense of concerned calculation.

Haney-Jardine and McTee also keep our interest – the former with her mysterious, detached nature – and the latter in moments that show he’s starting to enjoy this whole crime thing, even if it’s apparent he doesn’t have what it takes to keep up mentally with his wife and sister-in-law. Shifting loyalties that make sense in the moment intensify the plot-thickening.

The tight script communicates all swerves and fates while giving us just the right amount of information and not overloading storylines. Personality traits of all involved are apparent without being too explicit, adding to the tension in every strained relationship.

The look of the film also conveys a sparse, sinister atmosphere, with shadows enveloping the under-construction home during nighttime disturbances. Visible breath in the dark garage and several daytime exterior scenes filled with bare trees add to the cold vibe, as does the portentous score from Chris Westlake.

By keeping things simple, the Ramsay brothers spin a sophisticated, layered, involving tale. It’s not just about where things end up or solving the mysteries; the joy is watching it all play out.