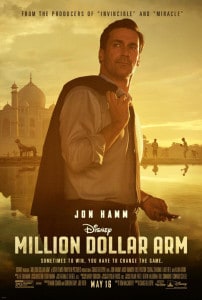 Although Million Dollar Arm is far from perfect, it’s a family-friendly film great for a rainy afternoon after the kids’ little-league game. The true-story-inspired plot revolves around the first two Indian Major League Baseball players (Rinku Singh and Dinesh Patel) and the ridiculous, yet successful publicity stunt that sports agent J.B. Bernstein (played by Mad Men’s Jon Hamm) orchestrated in 2008. Hamm brings his delicious suaveness to the silver screen as J.B., who is out of work and almost out of money and makes a major gamble with his career.

Despite my guilt-free, deep-seated love affair with Hamm, J.B. is almost a mirror image of Tom Cruise’s character Jerry Maguire – sadly but not surprisingly. (Cue the morally ambiguous sports agent going on a path of enlightenment and learning important life lessons from under-privileged kids.) Director Craig Gillespie attempts to portray J.B. as a heartless, money-hungry sports agent but fails to convince us. And to be honest, I kept expecting Hamm to light up a Lucky Strike and teleport to the ‘60s.

Continuing on its predictable path of J.B. doing some soul searching, realizing that loving people around him could be beneficial, and that having a family is kind of amazing, the film plods on, driving at plot points that were not all that compelling in the first place. Case in point: For the first half of the movie, it seems that the biggest obstacle the characters face is the need to keep pointing out that India plays cricket, not baseball. After the first ten times, this concept becomes grating.

The film does however get points for its solid soundtrack, which includes both sitar and Eminem-laced tracks. This is a welcome respite during some of the film’s duller moments.

Million Dollar Arm is not the best baseball movie ever made and certainly is not a classic, but it shows that Gillespie has the gusto and skill to tackle a wide range of genres. This is the same director who gave us the indie flick Lars and the Real Girl, the moody vampire howler Fright Night and the teen popcorn comedy Mr. Woodcock. While Lars is certainly the best film he’s done so far, Million Dollar Arm shows us that he’s evolving.