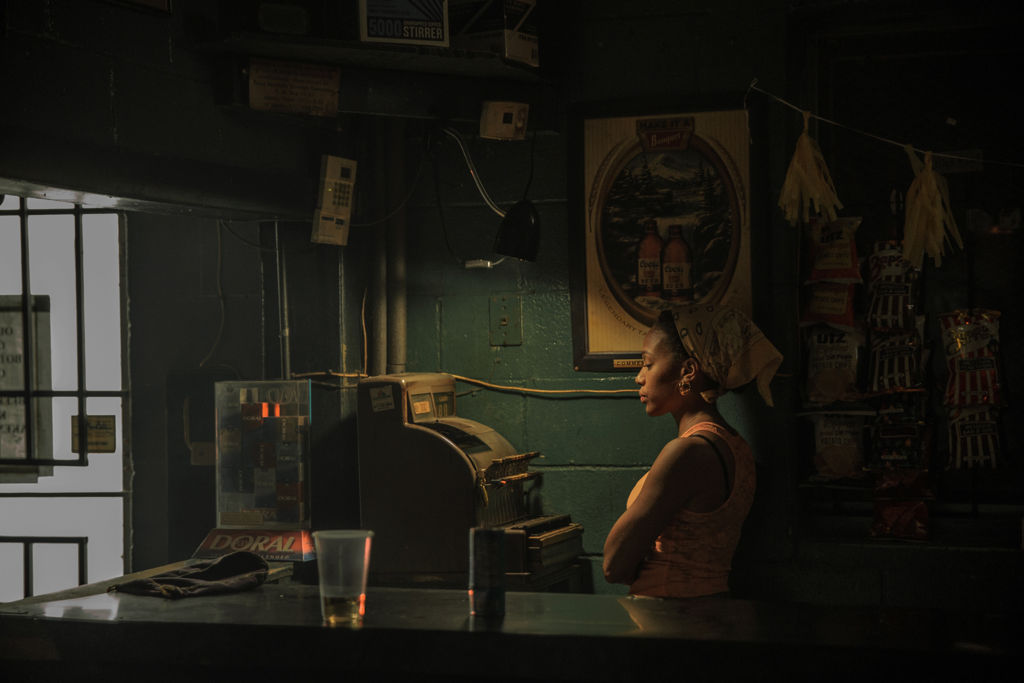 Turquoise’s (Nicole Beharie) “uniform” consists of a T-shirt (sometimes sleeveless), jean shorts and a headscarf. For the majority of Miss Juneteenth, written and directed by Channing Godfrey Peoples, Turquoise wears this while working as a server at Wayman’s restaurant, at her other job putting makeup on the deceased at a funeral parlor, and raising her daughter.

Her “uniform,” much like her life, is ordinary. Her extraordinary moment was years ago when she was crowned “Miss Juneteenth” and given a scholarship and a tall, sparkly crown. Turquoise is determined to prove to her town that, although the pageant path didn’t work out for her and she didn’t go to school or get a high-paying job, it can work for her daughter.

As much as the pageant serves as a bonding tool and offers a lense into the “what-ifs” for Turquoise, it doesn’t create change, rather only reinforces pre-existing circumstances. Miss Juneteenth is more of a character study of a black life, with a show of glitz and glamour added in. And though the show adds drama, the people within the story are more compelling.

Turquoise works two jobs to support her daughter, Kai (Alexis Chikaeze). Kai’s father, Ronnie (Kendrick Sampson), wants to do better by his family but can’t seem to get it together, financially or otherwise. Right before Kai turns 15, Turquoise has her apply to the Miss Junteenth pageant, which commemorates the day when slaves in Texas were officially set free, two years after the Emancipation Proclamation.

If the idea of Turquoise living through her child wasn’t clear enough, she even wants Kai to perform the same poem she did, Maya Angelou’s “Phenomenal Woman.” In typical teenage fashion, Kai isn’t into what her parent wants (the pageant) and wants to join the dance team. Kai also has a nondescript boyfriend, who Turquoise wishes weren’t around.

Throughout the film, Turquoise has to be a steadfastly focused force, as there’s so much to potentially derail her. The funeral director, Bacon (Akron Watson), smiles; tells her she works too hard; and, while professing his love to her, says he wants to help. When Ronnie smiles in his smooth, flirtatious nature, it’s understandable why Turquoise can’t break free.

In offering their hands, the men are going against what she wants, which is to succeed on her own. And her mother Charlotte (Lori Hayes), the church woman with the drinking secret — well it’s not really a secret — isn’t helping matters. Beharie portrays Turquoise with confidence and toughness, but sometimes her tough exterior melts. When she’s working at the restaurant one day, she says to Wayman (Marcus M. Mauldin), “Ain’t nothing wrong with trying to do better; that’s the American Dream.” To which he replies, “American dream? Ain’t no American dream for black folks.”

In the moments where the camera rests on Turquoise’s face, when all the men have disappointed her or left, Wayman’s quote rings truer than ever to her. In that vulnerability, Beharie makes it clear that this isn’t just a story; it’s someone’s reality.

This film comes across like a documentary in its representation of single motherhood and the black experience in a small town. The pageant is one of those traditional, small-town events that adds to the authenticity, but it doesn’t have much impact. Most of what happens to Turquoise could have happened without a pageant, such as the changes in her job, her realizing she can’t rely on Ronnie, and getting closer with her daughter.

Because it’s not this catalyst for change, the event seems frivolous and at times even unnecessary, but maybe that’s the point, as it serves as a distraction and a way for Turquoise to let go of the past. Considering how Turqouise was written, she probably could have figured out the latter all by herself.

Miss Juneteenth is a film that is necessary. As a black woman, especially at this time, I needed it, and other black women do too. This film shows black women as the strong and capable people we are, and that’s something that needs to be seen, not just now, but all the time. And I’m hopeful that, in the future, there will be more of these sensitive, quiet and beautiful films.