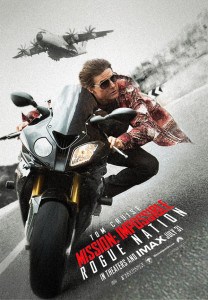 Nearly 20 years since 1996’s Mission: Impossible, which would spawn five sequels, the action franchise shows that it’s still got what it takes to deliver an action-packed, suspenseful and ultimately very satisfying summer flick.

Tom Cruise returns as lead Ethan Hunt, who is equal parts world-class detective, MMA fighter, expert driver, computer whiz and master of deception – or as CIA Director Alan Hunley (portrayed by Alec Baldwin) would likely say, “a man who gets what he wants.” Also returning to the franchise are Ving Rhames and Simon Pegg as the Impossible Missions Force’s tech gurus and Jeremy Renner as IMF’s government liaison.

New to the crew is Rebecca Ferguson, who plays one of the most dynamic, exciting and palatable love interests I have yet to see in these sorts of action/adventure films. I even hesitate to call her character (British intelligence agent Ilsa Faust) a love interest, which is never actually confirmed and, as I have said before, shouldn’t simply be a certainty because of her wardrobe choices or because she is strikingly beautiful. Faust serves as much more than a mere conquest; she’s a shrewd, tough-as-nails and complex action star in her own right. 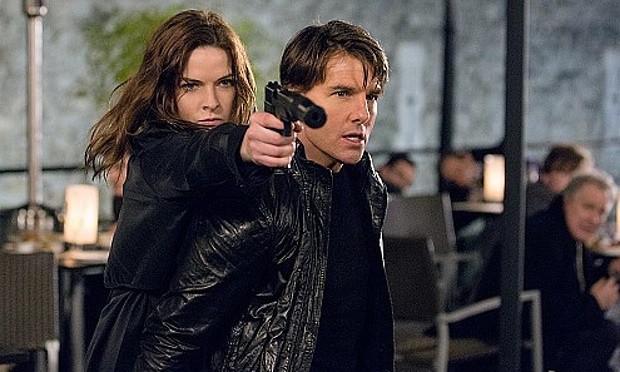 One of Rogue Nation’s chief set pieces – a motorcycle/car chase interspersed with several first-person POV shots – is on par with some of the better chase sequences I have ever seen. Though it may not be as creative or pack as big of a punch as, say, The Raid 2’s car fight/chase scene or really any chase scene from Mad Max: Fury Road, it was pretty exhilarating from start to finish.

It was well publicized that Cruise, 53, did some insane stunts, including holding his breath for more than six minutes and ACTUALLY hanging off the side of a plane, which the actor said was “undoubtedly the most dangerous thing ever done” – this after climbing the tallest building in the world in his last M:I film, Ghost Protocol. There’s also no Ethan Hunt stunt double; Cruise did everything himself.

Director Christopher McQuarrie (re-joining with Cruise after 2012’s crime-thriller Jack Reacher) gifts us with some endearing bits of comedic relief, which are well timed, not too low brow and remind us that we’re supposed to be having fun, despite dangling from the edges of our seats.

Though it didn’t have as many of the 007-style gadgets as I would have liked, this M:I flick proves that some good ol’ fashioned elbow grease can be equally exciting and relevant. This one’s a great choice if you’re looking for a thrill-ride summer blockbuster, and it certainly won’t disappoint any of you M:I fans.