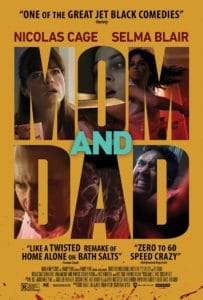 The parents aren’t alright in Mom and Dad, a high-concept, blood-soaked satire about folks suddenly developing (actual) murderous intentions directed at their children. The phrase “I swear I could kill that kid” is no longer an exaggerated statement of infuriation, as some mysterious phenomenon creates a gloriously weird amalgam of Parents, The Purge, and Dawn of the Dead in Brian Taylor’s jet-black horror-comedy.

Taylor is no stranger to excessive nuttiness being one-half of the team behind the Crank films (along with Mark Nevildine), and his first solo outing as writer/director is just as bonkers, though it also has more refined, incisive brand of exploitation at its core. The utilization of volatile parent/child relationships inside suburbia’s maze of McMansions isn’t especially deep, but at 80 minutes the story is lean and mean. Very, very mean; and, also, quite entertaining.

Brent and Kendall Ryan (Nicolas Cage and Selma Blair), along with their kids Carly and Josh (Anne Winters and Zackary Arthur), prep for another soul-crushing day of dysfunction at work, Zumba class, school, and home, respectively. As they go through the motions, some sort of plague breaks out inspiring parents to murder their kids. In typical 2018 fashion, the strange event is explained in a 20-second clip from The Dr. Oz Show. It’s all the better, because too much explanation isn’t needed with the focus rightly given to the hyperbolic perversions and their implications. 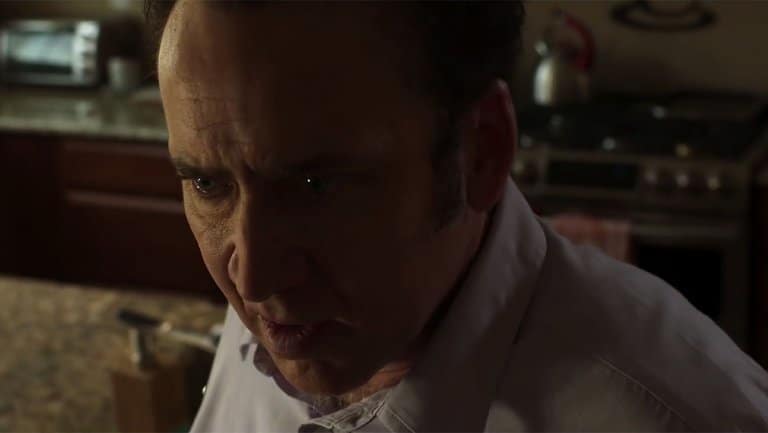 Taylor smartly doesn’t push the gore of the early homicides too far, yet it’s never in doubt what’s happening. A blood-soaked mop, car keys moving down in a stabbing motion, and a viscera-covered baseball bat say all they must without showing the actual acts. Kinetic camera movements and quick editing is effective at driving the impressions home. A childbirth sequence gets a little upsetting, but it’s balanced by Roxette’s “It Must Have Been Love,” just one example of how tone is beautifully balanced throughout. The concept is always crazy, but never in an overly bleak, off-putting way.

The performances by Cage and Blair are what consistently anchor the mayhem, though Cage can’t quite bottle the madness in a first act where he’s supposed to be a somewhat normal dad suppressing the midlife crisis impulses. His progression to homicidal maniac doesn’t seem like too far of a trip, though once he goes full-on Crazy Cage the facial contortions and high-pitched yelps are fitting and fantastic. Blair’s journey is more subdued, her newfound mania adding a sparkle to her eye that was absent as a jaded mother and housewife. 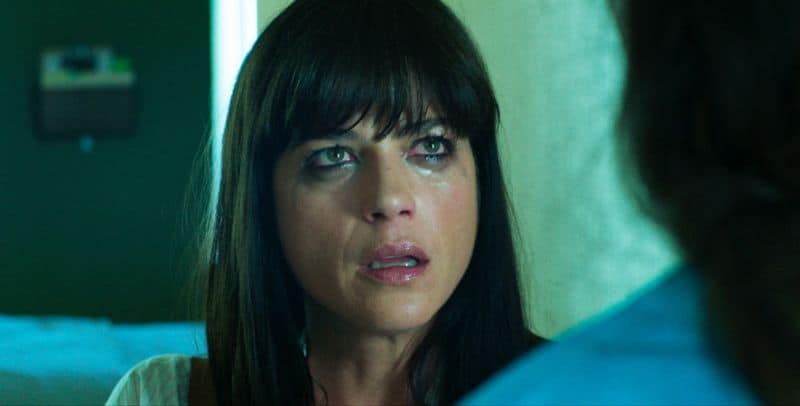 A few flashbacks judiciously show the couple’s familiar frustrations, Brent yearning for the carefree days of having wild sex in his Trans Am and Kendall coming to grips with losing her own identity in becoming defined only as her kids’ mother. The emotions, however far they bubble over, somewhat ground the   chaos, which is also fun. Cage destroying his newly-bought pool table with a sledgehammer is wonderfully over-the-top, and while Blair’s breakdown is more restrained at first, her use and description of a “sawzall” will make me smile every time I take on a DIY project.

Despite the different and delightful brands of unhinged brought by its two leads, Mom and Dad runs out of a little steam when it narrows the focus to the couple pursuing their kids through their house. Some sadistic Home Alone-style antics and a smart final-act swerve aside, the film can’t quite push the messed-up metaphor to a substantial conclusion. But in this context of deranged purgation an abrupt ending is better than attempting a tidy one. Mom and Dad certainly satisfies the “deranged” component.