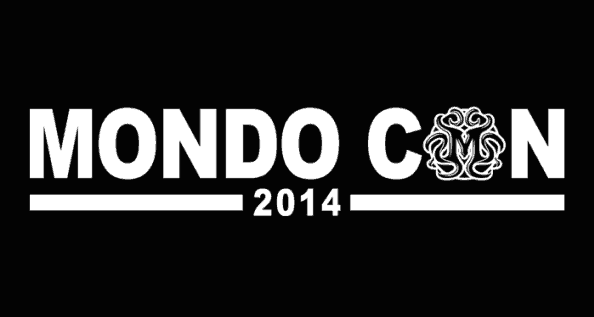 Badge holders for Fantastic Fest will gain access to all the great looking panels and screenings at MondoCon, which makes an already packed festival even more awesome.

MondoCon will be taking place September 20th and 21st, look below for the full press release containing the full lineup.

Austin, TX-August 21, 2014– Mondo is thrilled to announce its programming lineup of panels and screening events for MondoCon, set to coincide with the first weekend of Fantastic Fest on September 20 & 21 at The Marchesa Hall & Theater in Austin, TX. Mondo is creating a convention unlike any other, bringing together unique guests from a variety of areas to celebrate film, music, art, and toys with the world’s finest artists, designers, toy creators as well as filmmakers, composers and more.

A full service bar and Austin’s finest food trucks will be available at the convention, ensuring that attendees will have access to delicious food and beverages.

MondoCon attendees will also be able to take advantage of live screen-printing for t-shirts and exclusive posters throughout the weekend, courtesy of Industry Print Shop. It will be a rare look into the process of screen-printing and the individual stages of poster production.

It could be as small as a weapon or as big as an entire world, but each part of a film is designed by an artist. Who does that? How are the creatures, ships and landscapes of our shared dreams created? MondoCon sits down with six artists who have given form to some of the most iconic imagery in film. They will share stories and art, including pieces that have never been released publicly from the design phase on films like Raiders of the Lost Ark, Ghostbusters, The Matrix, Blade 2, Dredd 3D, Return of the Living Dead and more.

The Art of Toy-making

Go behind the scenes on the world of collectible toys! The panelists will dive deep into Mondo’s brand new toy line with photos and design images from the making of the first lineup of collectibles for Teenage Mutant Ninja Turtles, The Iron Giant and Alfred Hitchcock. Artist Mike Mitchell will also talk about turning his Lil’ Mikey illustration into a 3D figure. The future of Mondo’s toy collectibles will be discussed with the announcement of a new vinyl figure from a beloved comic book property.

Renowned comic book creator (Hard Boilded, Big Guy and Rusty the Boy Robot) and conceptual film artist (The Matrix trilogy) Geof Darrow will discuss Shaolin Cowboy, including presenting 8 minutes of never-before-seen finished animation from an unproduced adaptation of the beloved cult comic. In 2009 Variety reported that the Wachowski siblings and Circle of Confusion were producing an animated feature of Shaolin Cowboy, but no one has ever seen this footage publicly… until now. Darrow will discuss his history with the project and his experience working on the animation in Japan. This is a unique opportunity for the world to get a first look at a potential anime classic that almost was.

Shaolin Cowboy follows an unnamed former Shaolin monk who wanders the land with a talking mule named Lord Evelyn Dunkirk Winniferd Esq. the Third. Having been “asked” to leave the Shaolin temple, he has since had a bounty placed on his head, which many are eager to collect. Given the Shaolin Cowboy’s prowess in martial arts, however, this proves to be very difficult.

“I met Geof Darrow a year ago in San Antonio. During our talk, he mentioned that he once lived in Japan and was working on an anime. My brain broke at the thought of a Geof Darrow anime based on Shaolin Cowboy followed immediately by heartbreak when he said that funding was pulled and the project was canceled. I’ve always wondered what it would be like. What would a Geof Darrow drawing be like if animated? What would the Shaolin Cowboy look like in action? Good news. All of these questions will be answered at MondoCon,” said Mondo CEO Justin Ishmael.

Mondo is releasing the lost score for 2001: A Space Odyssey on vinyl for the first time ever.

Stanley Kubrick’s seminal masterpiece 2001: A Space Odyssey is known for its classical musical cues as much as for its vivid imagery. What few people know is that those cues that are forever associated with the film were a last minute revision on the part of Kubrick. An original score exists, composed for the film by the late composer Alex North (A Streetcar Named Desire, Spartacus) that was abandoned during post-production. North did not know his score was discarded until he saw the film’s premiere screening.

Composer and writer Brian Satterwhite will host a panel on the subject, featuring a live presentation of several scenes from 2001: A Space Odyssey with the lost score meticulously reintegrated back to the film to show what could have been.

Working with North’s estate, Mondo will release “Music for 2001: A Space Odyssey” in a deluxe package, complete with liner notes by Jon Burlingame. The vinyl will be available for sale at the Mondo booth.

Long before Gareth Edwards and even Roland Emmerich took on the iconic monster,Godzilla was set to make landfall on American soil, but it wasn’t his time. Writer Fred Dekker, FX artist Rick Baker and conceptual artist William Stout were just some of the big names involved in an early attempt at a US-produced feature film in the 1980s that few were even aware existed until now.

Mondo Creative Directors Justin Ishmael, Mitch Putnam and Rob Jones will discuss the creative process behind Mondo’s work, showing how the team works with artists to arrive at final images. The panel will include a presentation of alternate poster concepts from previously released prints and reveal new poster designs. The audience will also have the unique opportunity to “art direct” a project live during the panel, adding their feedback and voting on their favorite concept. Mondo will then produce the fan-created project.

Tickets for the evening screenings will be made available to badge holders ONLY via Eventbrite before the convention. Stay tuned to the MondoCon website and @MondoConAustin for screening times, ticket release dates and additional screening announcements.

A long overdue documentary that tells the story of 2000AD, the unsung cult hero of the comics industry. This film will celebrate and pay respect to the comic and explore its importance and influence on contemporary pop culture. Through in-depth interviews with the creators, writers, artists and fans of the last 35 years, we will tell the story of how this irrepressible, independent weekly comic has survived to have such a widespread cultural impact, not only on the international comics industry but also in film, art and literature.

MondoCon will have the world premiere screening of this documentary on Saturday, September 20. The screening will be free to badge holders with the Mondo poster for the event sold separately following the film. The trailer for FUTURE SHOCK! The Story of 2000AD can be found here.

The most terrifying film of all time will be presented as you have never seen or heard it before. The Texas Chainsaw Massacre will be shown remastered in 4K with an original score performed live at MondoCon on Sunday, September 21. Composers Anton Maoif and Umberto created a completely new score for the film over the course of the last year after conceiving of the idea with Death Waltz records at Beyond Fest last October. This is the first time it will be heard anywhere. The film will also play with the live score at Beyond Fest in Los Angeles on September 27.

Death Waltz records has produced the score and will make it available exclusively at the two shows in Austin and LA. Only 800 copies will be created. The exclusive Death Waltz vinyl will be included in the cost of admission. View a trailer for this very special event here and listen to three tracks from new score on Sound Cloud.

Sci-Fi classics Ghost in the Shell and Total Recall (1990) will also have screening events on Saturday, September 20 at MondoCon with brand new Mondo prints included in the cost of admission.

Mondo will operate a pop up shop in the parking lot of The Marchesa Hall & Theatre with tons of surprises throughout the convention. A few of those are spoiled here.

Celebrating the 15th anniversary of The Iron Giant Mondo will present a mini-gallery with multiple artists taking on the beloved animated classic. To give a tease of what’s to come, Mondo is thrilled to unveil the first print of the event from famed comics artist Alex Ross, working with Mondo for the very first time.

Additionally, Mondo announces the release of The Iron Giant soundtrack on vinyl for the very first time with two incredible package designs from artists Jason Edmiston and Jay Shaw.

Version B – Artwork, and package design by Jay Shaw

Tyler Stout lent his stunning artwork for an alternate cover of Boom! Comics’ Big Trouble in Little China #01. The print originally was made available as the official poster for Butt-Numb-A-Thon 9 at the Alamo Drafthouse in 2007 long before Stout was a household name.

An expanded lineup of artists, panelists & exhibitors in attendance is below, joining previously announced legends like Basil Gogos, Geof Darrow and Mike Mignola. Bios and information on all special guests can be found at the MondoCon site here.

Mondo has expanded in recent years to include a world-renowned gallery, becoming passionate purveyors of art, vinyl, VHS and now toy collectibles. MondoCon will celebrate all of this and more, a chance for fans of film, art, collectibles & music to mix with their creators.