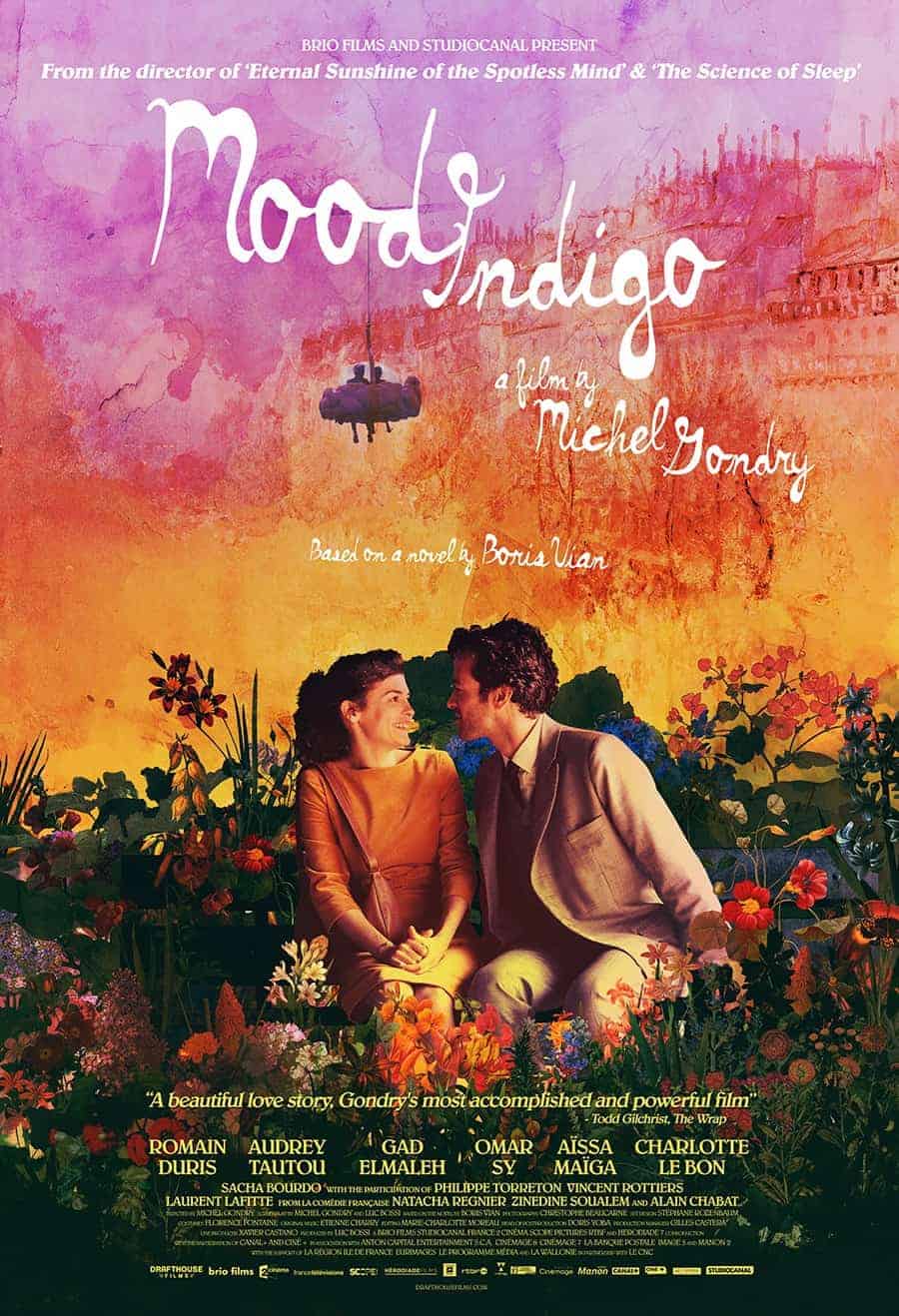 For the amount of creative surrealism contained within Gondry’s film adaptation of Boris Vian’s novel, Froth on the Daydream, Mood Indigo happens to be a touching tale of the life cycle of love at its core, bursting with inventive flights of fancy as Gondry’s seemingly inexhaustible imagination runs roughshod throughout the streets of Paris. At any and all opportunity Gondry, in true Vian fashion, marries one object to another creating an endless array of Seussian contraptions tailor-made to showcase the director’s highly-imaginative visual skill set such as the pianocktail, crawling doorbells, musical strings of sunshine and much more.

Desperate to fall in love (even outright demanding it) after finding out that his Jean-Sol Partre obsessed friend, Chick (Gad Elmaleh) has found love, Colin (Romain Duris) sets out to find himself a girl with the help of his trusty chef, Nicolas (Omar Sy), and his pet mouse (Sacha Bourdo). Not long after learning the gangly-leg dance, Colin employs these moves to woo Chloe (Audrey Tautou), rather successfully, thus beginning their burgeoning love affair which quickly results in a church-set kart-race marriage.

Throughout the entirety of Colin and Chloe’s honeymoon stage Gondry presents an endless parade of dream-like imagery filled with wonder and imagination; frame after frame, saturated with color and kinetic energy effectively conveying the illogical side-effects of a chemical imbalance stemming from falling madly in love. The presentation of Gondry’s unbridled imagination is nothing short of intoxicating; brilliantly executed in every conceivable way as his usual visual trickery is perfectly complemented by the production design, costumes, elaborate sets and the intricately hand-crafted props.

Unfortunately towards the end of their honeymoon, a water lily inadvertently drifts its way into Chloe’s lung marking a shift in this once fanciful romance brimming with zeal and passion towards one of melancholia. This heart-wrenching mood shift via illness is skillfully achieved through the gradual removal of the life and color that once dominated the film, almost imperceptible at first, along with Christophe Beaucarne‘s swirling camerawork of the various whimsical settings which is rendered more and more stationary as Chloe’s delicate frame is slowly crushed under the colossal weight of domesticity.

Michel Gondry, much like with Eternal Sunshine of the Spotless Mind, has once again crafted an ever-imaginative story centering around the all-encompassing power of love. All the endless possibilities are presented in a beautifully-realized fantasy world where young lovers see the world from high-above in a crane-operated cloud with seemingly limitless wealth and an undying lust for life. Even when the carefree attitude shifts into discouraging misfortune as the two lovebirds are slowly swathed in the suffocating fabric of responsibility and its inherent monotony – the beauty is still there. Leaving the viewer, both, “in despair and horribly happy.”