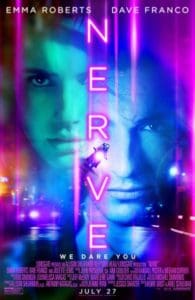 Attempting to apply practical reason to Nerve – the movie or the communal online game at its core, is a fool’s errand. However, allegorically speaking, the flashy social media thriller is occasionally perceptive in ways a bit deeper than “online danger” platitudes. It’s also energetic and boasts a cast that’s up for the ridiculous challenges. Watching dense youngsters do stupid things to gain internet fame and fortune could be as frustrating as scrolling through a teen’s Facebook feed, and while there’s plenty of stupidity on display here, it’s an informed doltishness.

Vee (Emma Roberts) – full name Venus Delmonico, which sounds like a perfectly made-up online gamer handle, is a Staten Island teen with dreams of attending art school in California. Money is in short supply, however, and she doesn’t want to leave her single mother Nancy (Juliette Lewis) all alone. The shy photography enthusiast is turned on to Nerve by boisterous bestie Sydney (Emily Meade), who’s earning followers and cash for completing various stunts. Getting in the game herself, Vee meets Ian (Dave Franco) on her first challenge and the string-pullers (whoever they are) have the pair join forces for increasingly dangerous activities. When tasks are completed, increasing amounts of cash are wired into their bank accounts.

Directors Heny Joost and Ariel Shulman, makers of Catfish, have experience with online angst and the motivations and messages used in Nerve are unpretentious and genuine. Nerve asks you a simple question the first time you log in: “Are you a ‘watcher’ or a ‘player’?” It’s a subtle egging on of participants to either go for notoriety or bask in anonymity, being an observer who can critique others without consequence. 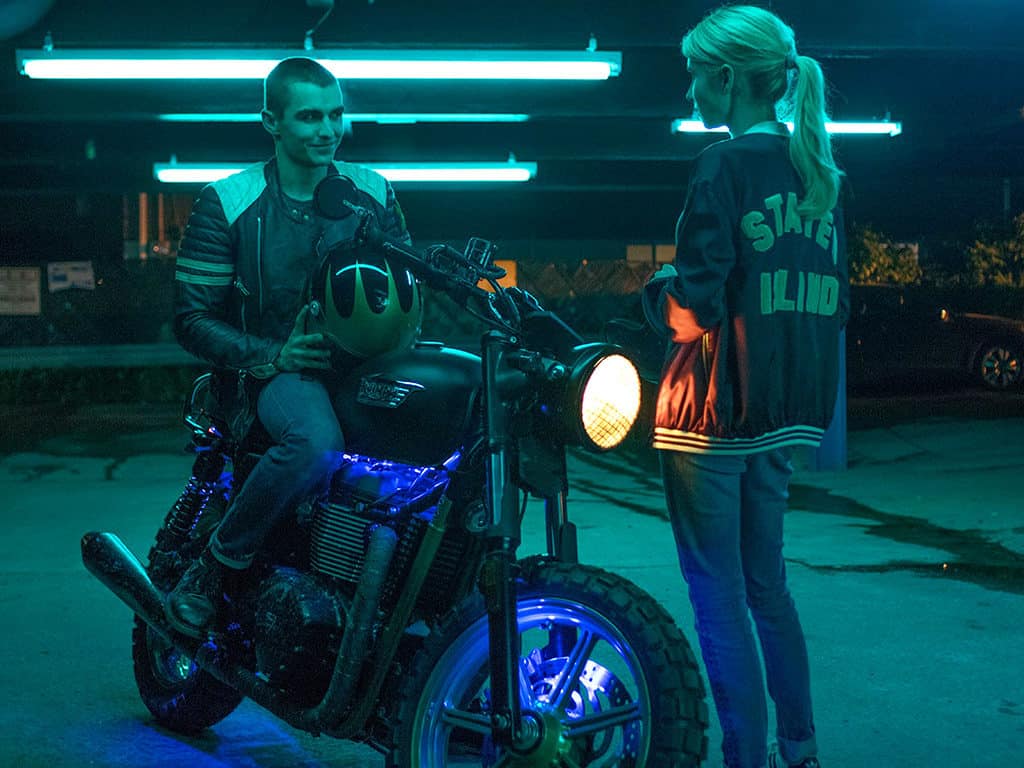 Vee joins the game impulsively after a real-life social embarrassment, which feels honest, and sets up her journey. Some fairytale imagery also finds its way into the metaphor with Vee’s wardrobe. She tries on an emerald green dress early in the movie (welcome to Oz, Dorothy), and later she sports a red hoodie as she eludes the wolves in the online woods. A little on the nose, but fitting. Roberts and Franco are both charming and they sell their characters’ innocence in this strange virtual land.

The vibrant, neon palette used by the directors and cinematographer Michael Simonds also suggests a fun, bubble gum sheen that hides the dangers underneath the surface, much like the irresistible glow of our connected devices. A few shots of game play, like the ones including Ian’s motorcycle outfitted with purple lights, feel like a weird Nicolas Winding Refn adaptation of Pokémon Go.

Nerve falls apart when the messages are trumped by the mechanics of the game. Of course Nerve wouldn’t be as secret as portrayed here – even though it seems everyone knows about it, and there’s no explanation for why and how it exists. Logistics are a huge issue, with impossibilities never satisfactorily explained away. A whole subplot with Vee’s friend Tommy (Miles Heizer), who happens to be a super-hacker, taking down the game via laptop is extraneous. The climax is impossibly ridiculous, though its cautionary lessons are relevant.

It’s also interesting that Vee’s whole predicament could’ve been avoided if she had taken simple actions in real life before committing herself to being an online player/celebrity. If she’d shared her feelings with her mom, had the courage to approach her high school crush, or hashed out her issues with Sydney, she probably wouldn’t have gotten into this mess. But, then again, she never would’ve met Ian; so kids, apparently sometimes it pays to act foolishly on a whim and put yourself in grave danger.