Franck Khalfoun‘s Maniac remake has been floating around the festival circuit for quite some time now, but on June 21st this POV horror tale starring Elijah Wood will be unleashed into theaters. It will most likely divide audiences, much like its reception at the festivals, however I found it to be a refreshingly different take on the serial killer film and found it to be quite well made. It’s also ridiculously violent, so gore hounds rejoice.

We’ll have a full review posted by the release, but until then, hit the jump for the trailer, synopsis, and poster.

A 21st century Jack the Ripper set in the present day, MANIAC is a reboot of the cult film considered by many to be the most suspenseful slasher movie ever made. Frank (Elijah Wood, in a tour de force performance) is the withdrawn owner of a mannequin store, but his life changes when young artist Anna appears asking for his help with her new exhibition. As their friendship develops and Frank’s obsession escalates and the number of victims increases, it becomes clear that Frank is far more dangerous than he seems. With a pulsating electronic score by Rob, the film is an intimate, visually daring, psychologically complex and profoundly horrific trip into the downward spiraling nightmare of a killer and his victims. 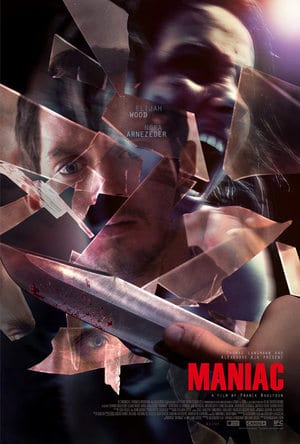