This is a repost of our review from NYAFF 2018. One Cut of the Dead finally opens Friday. Go see it.

One Cut of the Dead is the cinematic definition of having your cake and eating it too when it comes to conceptual filmmaking gimmicks. Like three films expertly rolled into a single whirlwind production diary, previous short-film director Shinichiro Ueda makes a statement with his debut feature in how his ingenuity can break down and probe an arbitrary-style contrivance like a one-take zombie film.

With the concept in mind, he pulls off the gimmick without a hitch just to prove to himself he can, but unexpectedly – for his first time behind a feature – he is capable of giving it narrative and thematic justification, building a rich background while peeling back the layers of his construction and telling a moving meta story of a beleaguered director finding new artistic purpose and more personable connections in his undertaking of the project.

A maverick production that finds so many ways of surprising you with how creative it can be with the restrictive premise, One Cut of the Dead is one of the few films with the imagination to dissuade the negative connotations of a filmmaking gimmick and elevate its execution to rounded, raw entertainment. 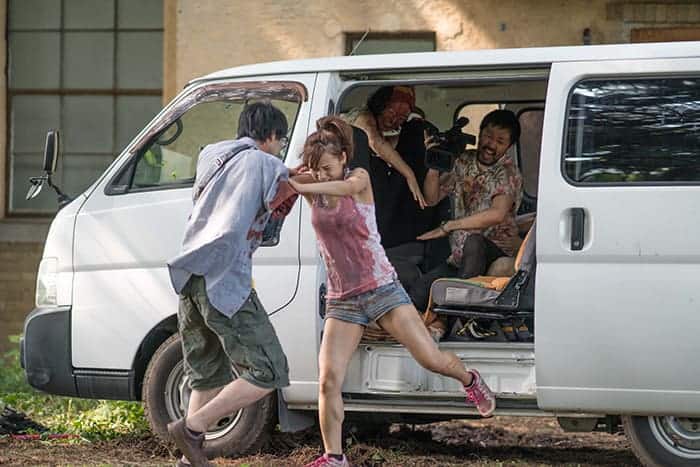 The central idea, if the title is not enough of a giveaway, is of a one-take zombie film and so we begin with that film of a maniacal director pushing his cast and crew to make a zombie film. In his psychotic zeal for “true, real terror,” he secretly performs a ritual to raise the dead in the abandoned warehouse in which they are shooting, and the film captures the cast fighting for survival against the director’s undead horde in an extended, handheld single cut that pushes it way through this space.

While ambitious, the execution is not seamless, as we see extensive uses of off-screen space, dead air, pointless dialogue, missed cues and strange style choices that lead our leading actress, actor and their makeup artist from the film within the short to fill time as they fight off the director’s malicious intent and survive. While far from a flawless use of a single-take style and doing literally nothing to innovate on the genre, the film is nonetheless a technical achievement and would have been a solid 6-out-of-10 curiosity bound for cult success in its imminent future.

While the credits played, I checked the elapsed time on my screener and realized the single-take horror film had only taken up a half hour of the run time, and felt I had been duped. Possibly because he was impressed with his own achievement or because he knew the production could make a better story than any one take film ever could, what followed after those credits faded was the stroke of genius that separates Ueda from others who have thought making a film encompassed by a single unbroken shot was their fast ticket to notoriety and praise. 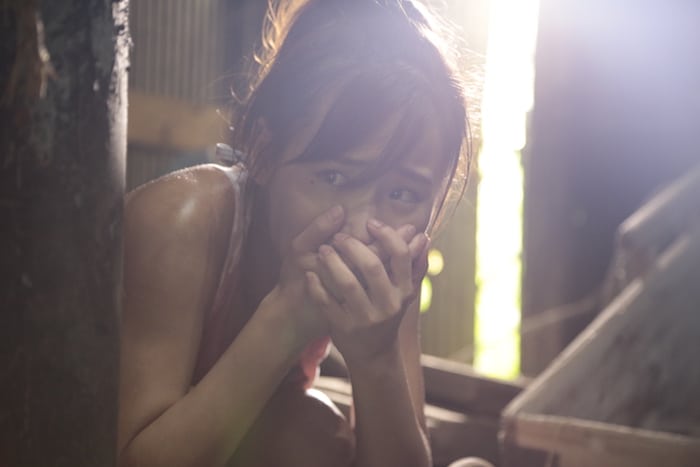 Instead of just doing the film, Ueda wanted to make a comedy of errors about the difficulties in pulling off a production with such an arbitrary stipulation and becomes a pseudo-behind-the-scenes mockumentary about an over-the-hill director and his hapless crew trying to make a single-take zombie film for broadcast and none of it going like he planned. The decision gives One Cut of the Dead a unique, endearing quality that makes humor and emotion out of the herculean task of making a movie.

It’s kind of like watching a double feature of Burden of Dreams and Fitzcarraldo or, more appropriately, Coven and American Movie, where the real compelling story comes from seeing how the sausage was made. The execution shows just how meticulous director Ueda has proven himself to be in his first outing because, only by seeing these films side by side, do we notice how complete the film feels with the juxtaposition.

Suddenly, all the mistakes, odd decisions and cheap exploits you see in the one-take film that he opens with are given a connecting justification and narrative reason for existing as they do. As expected, when working on a time constraint for a live audience with only one chance to get it right, the production goes horribly awry and the bulk of One Cut of the Dead is a tense race against the clock to improvise on the fly and complete the film for the network as best as they can. 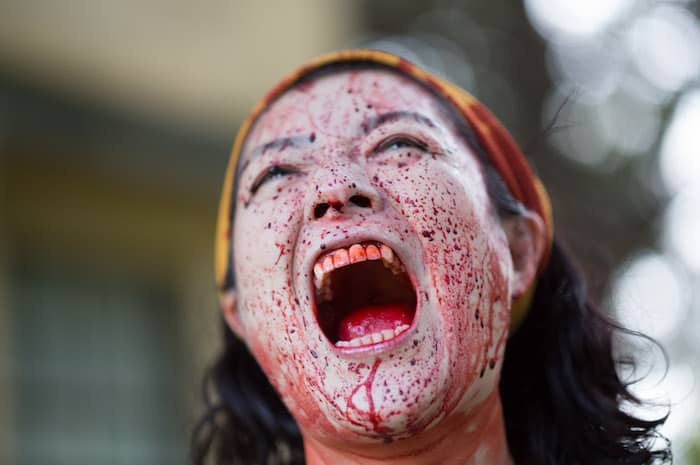 Hilariously, actors are replaced last minute, crew members are injured or sidelined and have to be worked around, rigs and equipment break, and solutions have to be found through the ingenuity of the cast and crew as circumstance keeps making their jobs more difficult. The satisfying thrill of seeing the companion film giving context to the gimmick you bought the ticket for is unlike anything you’ll experience in the current crop of zombie-tinged horror films still making their way out of Japan every now and then.

It feels like a bait-and-switch to be promised a one-take horror film and to get that plus an extensive comedy-drama about the emotional toll and backbreaking labor creating it causes, but the comprehensive effect of seeing them together is what makes One Cut of the Dead so engaging. Suddenly the manic director from the intro is not just a one-note screaming villain, but the actual director of the film who begrudgingly stepped into the role after a complication and who is only doing the project to resurrect his career and maybe earn the respect of his daughter who finds herself on the crew with him.

It is not everyday you walk away from a film and think the 30-minute, one-take aspect is the least interesting about it, but it is rings true for Ueda’s layered horror comedy experience. One Cut of the Dead delivers what it promises but goes above and beyond the call of duty by vigorously capturing that manic energy that is always flying every which way behind the scenes on any production.

It is no hyperbole to say Ueda has made one of the best, and certainly the funnest, film about the physical, emotional and creative act of putting images onto film, all while having the ingenuity to pull off a 30-minute-long take film just to use as an intro. One can only hope he can maintain this inventive perspective in all his future cinematic endeavors.