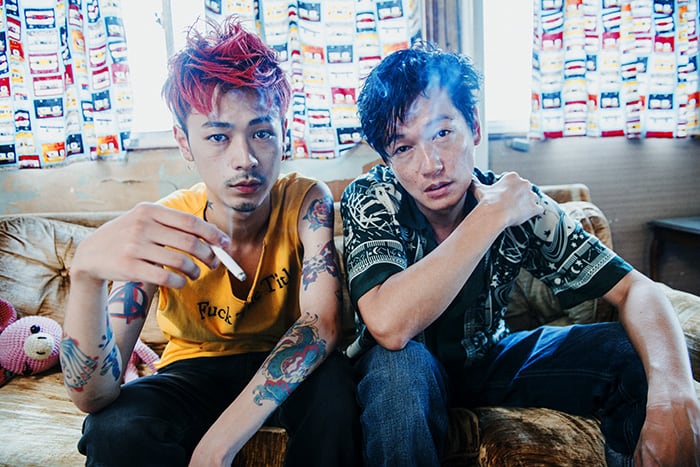 Kanato Wolf’s Smokin’ on the Moon is a bait-and-switch exercise that begins with an anarchist sense of untethered visual chaos and grinds down to a cloying but effective buddy picture. With a madcap predilection for “throwing everything at the wall and seeing what sticks” style, the film rushes from from the opening title like a bullet.

Based on Wolf’s own manga (as Yuichiro Tanaka), Smokin’ on the Moon draws you in with this rebellious punk-rock aesthetic and ethos before blindsiding you with a reflective and earnest midlife crisis ballad of two burnouts who are attempting to put their lives back together after drifting too close to the criminal underworld of Tokyo.

The challenge of this exercise is determining whether or not the complete tonal shift from the bacchanal carelessness of Sota and Rakuto (Arata Iura and Ryo Narita) to their sober stock-taking of the decisions they made in their adulthood, which have led to the Yakuza knocking on their door, was pulled of smoothly or just made the whole film incongruous and saccharine.

Based on the loving hand Wolf exhibits when it comes to these lowlifes and the effective balancing act he pulls off between their plights, I err more on the side of feeling as though the film works, despite the stark aesthetic and almost philosophical difference between the opening half hour and the remaining bulk of Smokin’ on the Moon.

We join up with these lovable burnouts at their rundown pad after two years of living together, making ends meet by selling weed to the other outcasts of their disgusting apartment block that was supplied to them by a wannabe rapper. In the extensive introduction to these losers and their current situation, Wolf really works to establish a texture to this crusty slice of life with his disheveled set design, schizophrenic editing tendencies and loose causality between scenes.

Before you really even set a foot into Sota and Rakuto’s freewheeling world of no responsibility, you are struck with a slacker phantasmagoria of vignettes and snapshots of how they live, which includes numerous one-note side characters; single-use jokes; and a smorgasbord of styles, up to and including two separate animated dream sequences. It’s momentarily off-putting but effectively establishes the punkness of Wolf’s source material as it assaults you with images and bits, utterly unbothered if you cannot see through its inane, overwhelming clutter. 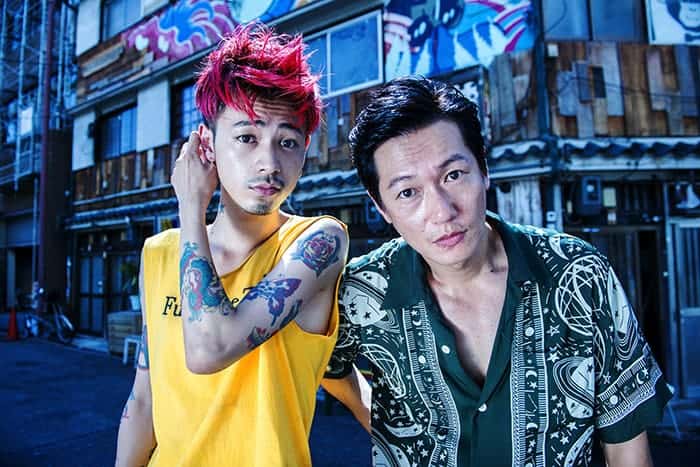 To say things take a turn from this anarchic opening is a massive understatement because, from the chaos, we shift – suddenly I might add – to the actual narrative about a fourth of the way into the film. Sota and Rakuto’s rapping supplier is murdered in a disturbing show of absurd cruelty by his suppliers, the Yakuza, and the hapless duo are suddenly in over their heads. Suddenly they can no longer have the deniability and distance afforded to them by being being tangential to the Yakuza and have to directly answer to them if they wish to continue their unbound lifestyle, which obviously takes all the fun out of it for these two, and they diverge.

Sota, already in his late thirties, has a midlife crisis that chases him back to his family’s Okonomiyaki restaurant in Kansai, where he learns the simple pleasures of an orderly and consistent life of ease. Conversely, Rakuto, being in his mid 20s and with a child to support, leans into the Yakuza offer and becomes a professional drug pusher, forcing the former slacker to become absorbed into the unsavory lifestyle he once tried to avoid. The film introduces the concept of consequences for one’s actions late in the game, and much of Rakuto’s descent and Sota’s redemption does not land like Wolf intended and feels serviceable at best, forced at its worst.

It’s difficult to get an audience to believe in your characters when you dedicated a half hour to instilling the idea that all is meaningless, but Smokin’ on the Moon pushes all its chips into the shift and subsequently loses all its punk-rock aesthetic in order to see it as genuine. Just as it was completely unapologetic when it came to its opening discord, Wolf maintains that same all-or-nothing energy when he wants his film to become a midlife drama about the challenges of losing your slackerdom when faced with circumstance.

While his effort can come off as excessively sentimental at times, especially when he shoehorns drug addiction, child abuse and lymphoma subplots to his story, the one thing you cannot accuse him of being is insincere. For better or worse Smokin’ on the Moon believes in its own sudden and sugary sincerity with which it portrays Rakuto’s loss of innocence and Sota’s newfound conservatism, and I am inclined to feel that is what makes the film work despite how differently it can feel from the beginning to the end.

In all honesty, if it were consistent, and been a two and a half hour, full-speed joyride through the punk-rock aesthetic, it would have gotten tiresome at some point. The emotional change-up is a little jarring, but Sota and Rakuto have a depth to them that can carry through when the story loses its anarchist tendency and becomes serious. It’s a mixed bag of a stoner melodrama that sees first-time director Wolf showing a respectable visual ambition for his debut and finding a tenuous but stable balance between sentimentality and absurdity.