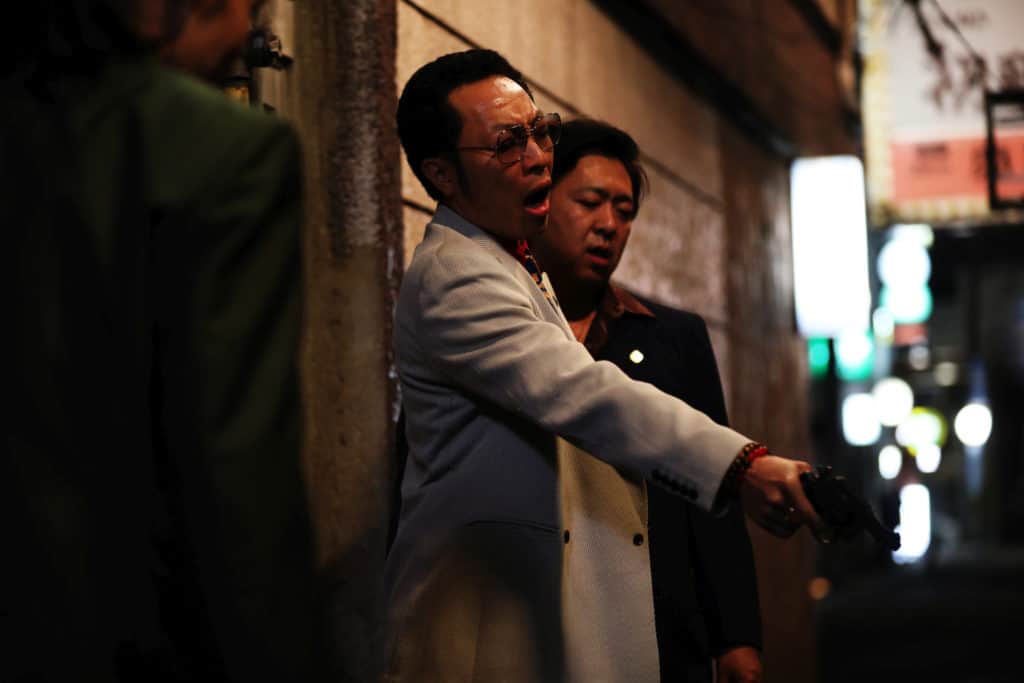 If the classic Toei logo title that opens up the film is not enough of an indicator, The Blood of Wolves is a studied, committed throwback to the blood-soaked, abrasive Yakuza films in the vain of Kinji Fukasaku, which helped keep the company afloat when films like Battle Without Honor and Humanity started becoming unparalleled box office successes.

Though now four decades removed from that major turning point for Japan’s industry, the fascination with that era of lawlessness – where the hyper-masculine Yakuza ruled the streets with an iron fist until ceremoniously cut down by a warring syndicate – never dissipated. Blood of Wolves, by setting itself in the sun-baked streets of Hiroshima and Kurehara City 1988, attempts to circumvent the naturally antiquated themes of the eternal genre by simply embracing the era with open arms. 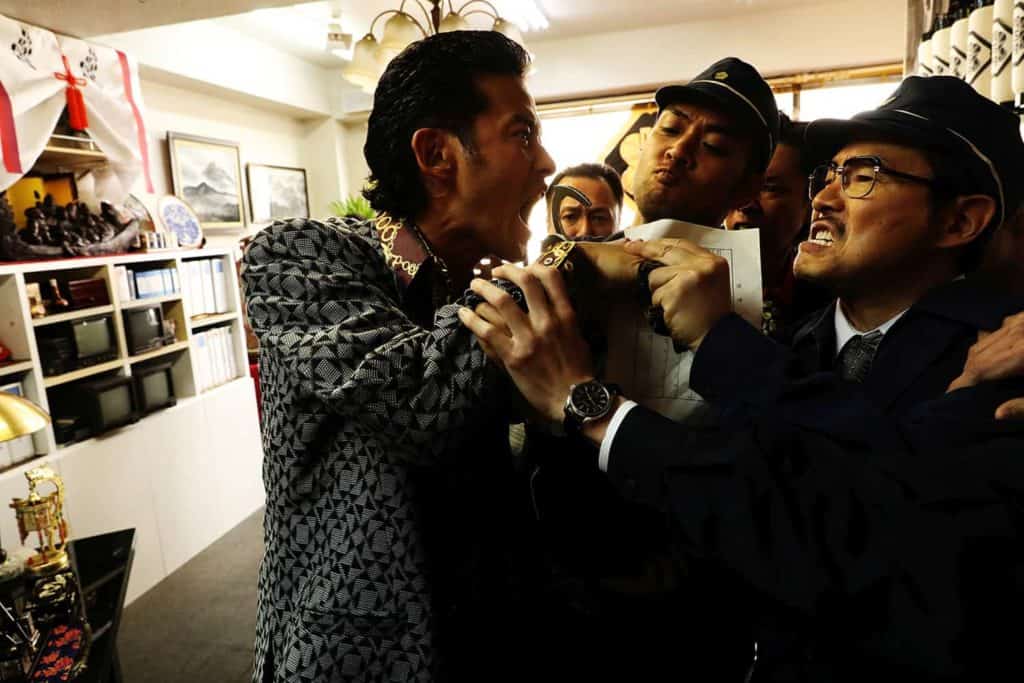 As with most of these films, the warring factions that divide the film into a battlefield are the Odani-Gumi Crime Syndicate, the Irako-Kai Family, and the belaboured police tasked with keeping order in all the bloodshed between them. Seemingly, at the end of the Yakuza’s era of prominence, the murder of a financier for the Kakomura (an affiliate of Irako-Kai) could spell war for the neighboring cities and their respected gangs. Desperate to enter into the waning years of Japan’s economic miracle at peace, the police hope to find those responsible for the sake of maintaining an equilibrium in this delicate situation more so than justice.

Leading this charge is the classic, mismatched partnering of a grizzled and extremely corrupt  veteran Ogami (Koji Yakusho, The World of Kanako) and the freshly graduated, by-the-books, starched-shirt Hioka (Tori Matsuzaka, Yurigokoro), whose disagreements over ethics, tactics and decorum provide much of the film’s comedy as they infiltrate the inner circles of the crime families to solve the case. The intrigue of this plot, which hopes to differentiate itself from those it emulates, is the hidden tension between our heroes, where Hioka is convinced Ogami is secretly aligned with the Odani and attempts to expose his connections.

Like most Yakuza films from the era it pays homage to – through its graphic flourishes of violence and seediness – Blood of Wolves narratively speaking is a bit of a mess. With a cast of 20+ principal characters, all with separate affiliations to the factions and sub-factions of the warring bodies involved in the central conflict, Shiraishi does his best to chart a path through the chaotic structuring of his plot, but it is mostly for naught. Even with the central duo being a good sticking point to wade through the layers of this war, either through poor storytelling or erratic pacing, it becomes easy to get lost among all the participating players. 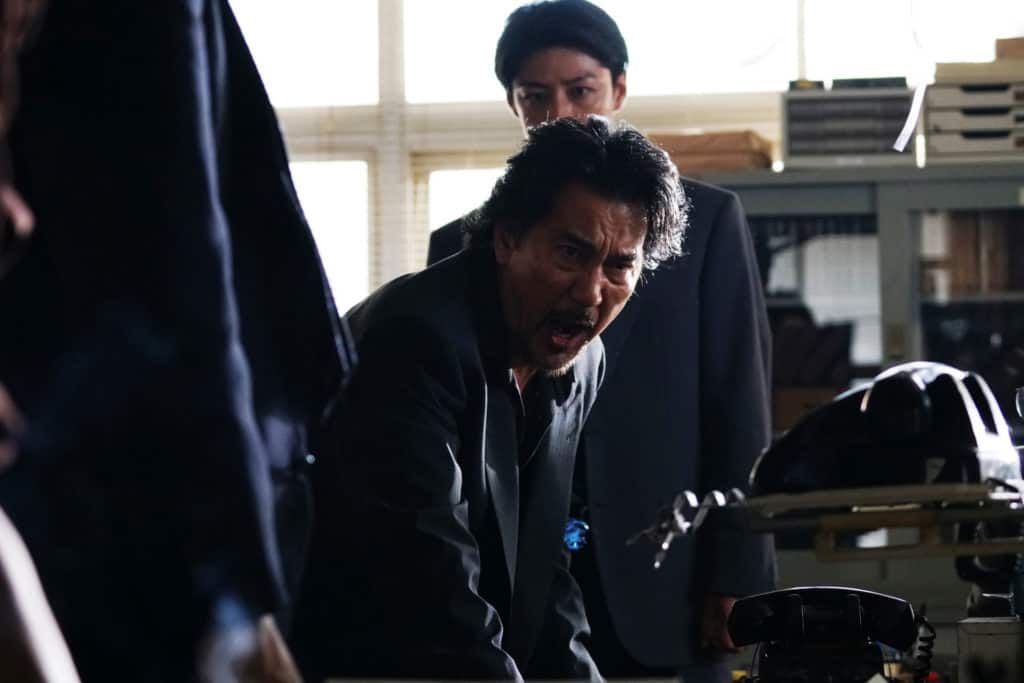 Yakuza can kill and be killed without discretion onscreen, but the only thing that brings pause to this ramping of tension toward warfare is when we are unable to parse which side of the conflict the bodies fall on. The narrative itself is a simple one that is oft repeated in the Yakuza genre, but without the likes of a Kinji Fukasaku at the helm, the intentions tend to get jumbled.

The more troubling aspect of Junya Ikegami’s script (based on Yuko Yuzuki’s novel) is not how indebted to older Yakuza films it is, but rather how reminiscent it is of the buddy-cop film of more western traditions. The odd coupling of Ogami and Hioka is a match too diametrically opposed to preempt anything but buddy-cop cliches and character types, and their dynamic becomes stale and predictable before they even share a line of dialogue together.

Ogami is the textbook crooked cop who roughs up witnesses with ruthless abandon, disregards his superiors as pencil-pushing suits, has no time to observe warrants or laws himself because he has crooks to catch, and acts overly chummy with the denizens of the criminal underworld to arouse suspicion. Yakusho, who played a similarly dead-to-rights detective in the phenomenal World of Kanako, is in his element and lights up the screen especially when playing off Matsuzaku, who is so nebbish and unassuming as Hioka, bringing out some of the film’s better comedic moments. 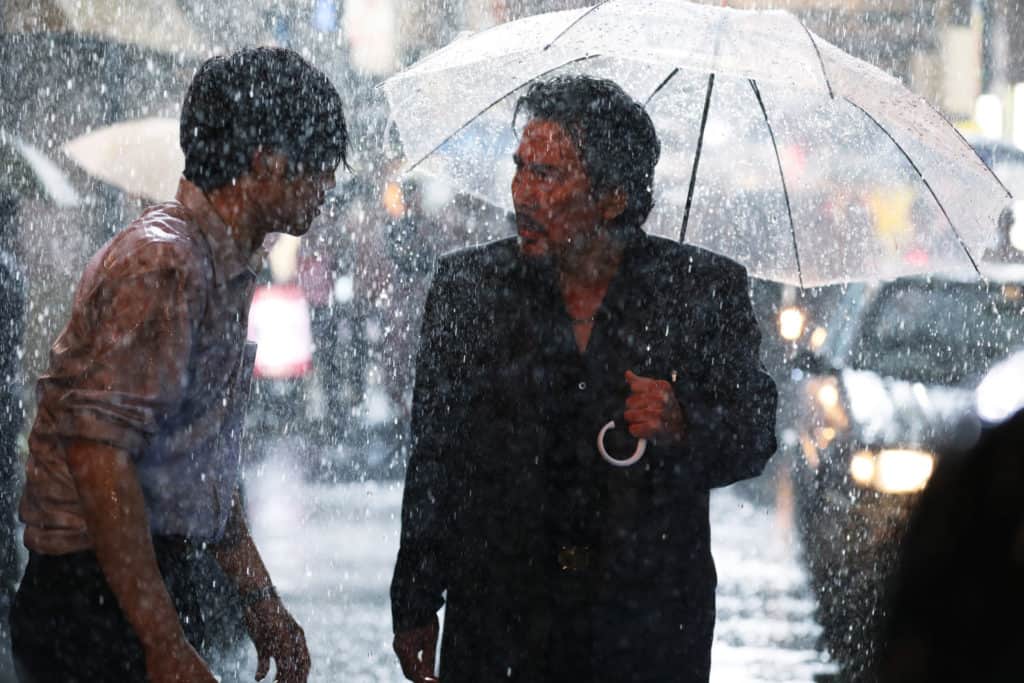 Yet even with these two actors putting their all into the dynamic between them, the script’s uninspired recycling of archetypes to fill out their roles makes this duo dead on arrival. There is no surprise attached to the gradual respect one develops for the other because we have been expecting this conclusion since their introduction.

What many would be looking to get out of Shiraishi’s film is what initially sold those Yakuza films of the 1970s to the public, that being unapologetic violence. Blood of Wolves keeps up its end of the bargain, and much of the onscreen gruesomeness is competently done. Credit where it is due, the film doesn’t hold back, even beginning with a gangland-style torture scene in a pigsty where the bloodied financier has his finger sawed off with a wakizashi in graphic, close-up detail.

Brutality is second nature to the Odani-Guni and Irako-Kai, and – by the zero hour, when Hioka and Ogami have cracked the case – there has been a significant body count, especially in the final scene, which is a veritable bloodbath. This is a really surface-level appreciation for Blood of Wolves and what it aims to define itself by, but it takes commitment to the genre to decapitate a character and leave his head in a urinal. And I choose to reward that disgusting attention to detail.

Blood of Wolves is not the type of Yakuza film to reinvigorate or redefine the genre because, unlike films that do that, it is terrified to step outside of generic boundaries. This predictable bloody affair, which earns some distinction for the clarity and glossiness Shiraishi brings to his visuals, loses so much goodwill with its overly familiar storyline and characterizations. It’s a slick condensing of what a Yakuza film feels like but is fatally missing a personality of its own.