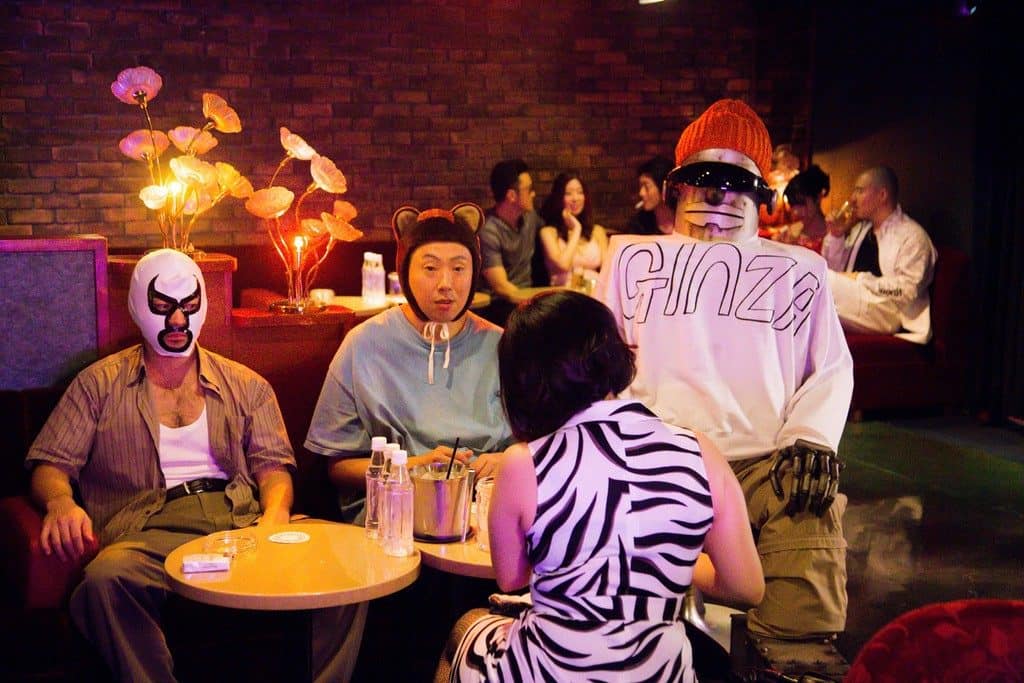 While it is not a guaranteed formula, most filmgoers agree that the moment when a film incorporates a robot into its story should be when the film becomes at least somewhat engaging. Yamashita’s Hard-Core is the exception to that rule, as its introduction of a towering mechanical man into the despondent lives of miners Ukon and Ushiyama (Takayuki Yamada and Yosiyosi Arawaka) only accelerates the film’s sense of aimlessness and redundancy.

Based on the manga by Imashiro Takashi, the Linda Linda Linda director’s approach to the material is fundamentally preoccupied with overstuffing his film with pathos for the sad sack protagonists and awkwardly necessitating plot points borrowed from the manga. If it weren’t for the robot lumbering through the frame every so often in this disjointed curiosity, one might earnestly forget that what we are watching is a comedy.

Hard-Core follows two losers who are trapped in the shadows of their more successful siblings and bond over their mutual uselessness to society. Ukon is the belligerent drunkard whose cynicism for “people these days” is offset by the pitiable Ushiyama whose softspoken awkwardness brings out the genuine in Ukon’s dreary worldview. Together they lead a meaningless existence working for a wealthy private contractor who believes, without much reason, that a shogun’s gold deposit was buried in the mountains of Gunma Prefecture and tasks the two with boring into the earth to find it. 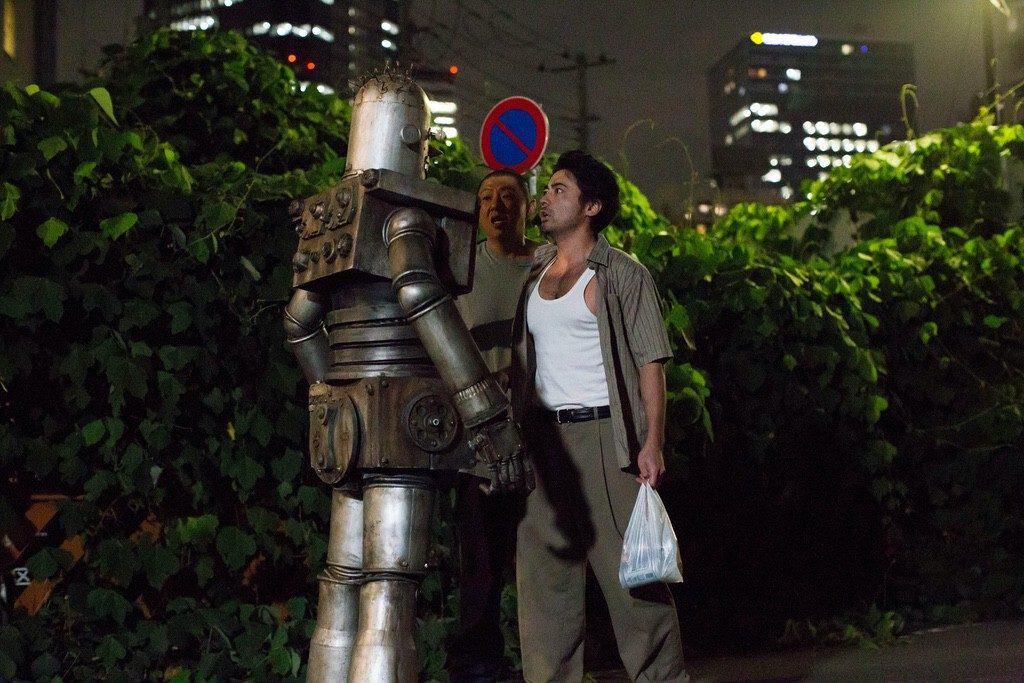 They are visited sporadically by an automaton that was housed in the abandoned factory where Ushiyama stays and incorporate him into their day-to-day, route-less existence. For most films this major leap in fiction would signal a turning point where the two loveable losers would finally start to get their lives together to some semblance of normalcy, following an injection of the strange and weird that forces them to realize the despondency they call their lives.

The robot, who they affectionately call Robo-O, becomes an awkward fixture to the protagonists’ lives, and, despite him being an 8-foot robot with rocket boosters and super strength, it does not seem to add much to the script. They pass him off as an overly dedicated cosplayer, conscript him to the workforce and go bar-hopping (where, yes, he does indeed dance the robot, in the film’s one standout comedic scene).

The film doesn’t seem to go much of anywhere for awhile, that is until the script gets bogged down by too many consecutive plot points in the second half, making the film feel ungainly and muddled to appease the source material. This lack of direction unfortunately detracts from the film’s best leg it had to stand on (Ushiyama and Ukon befriending Robo-O and gaining newfound confidence from him) and clogs it all up with unnecessary story detail. 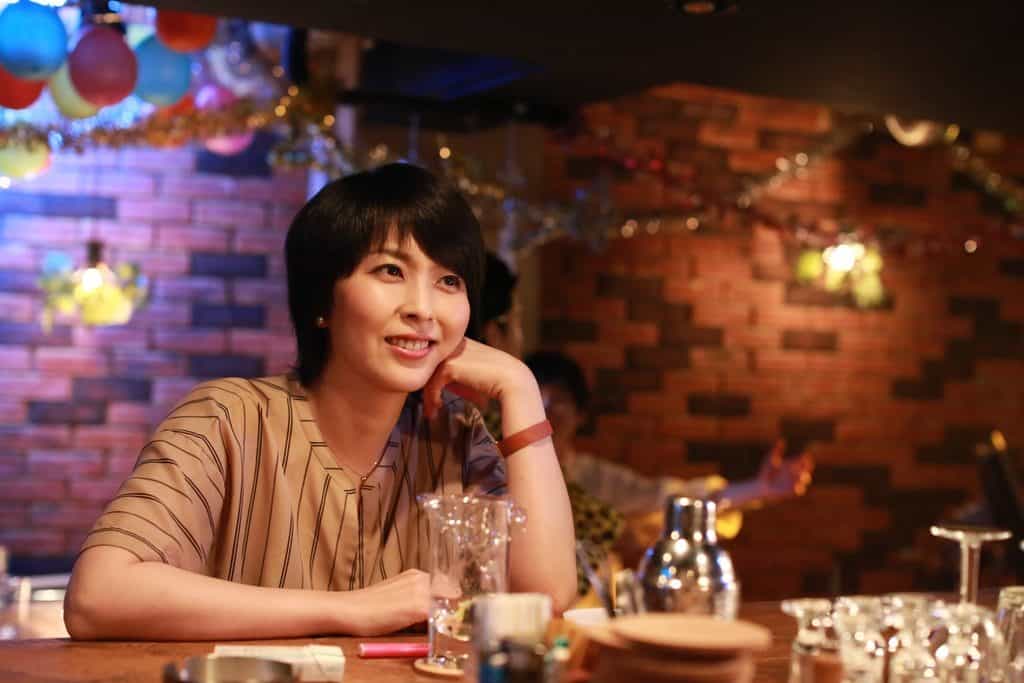 It reeks of trying to be too faithful to the manga, evidenced by us being bombarded with a murder frame-up plot, Ukon’s sexual tryst with a contractor’s daughter, his successful brother (Takeru Satoh) discovering the robot and its origins, a scheme to find the gold for themselves and sell it under the contractor’s nose, and the origins of Ushiyama — all in the last hour alone and in dizzying succession. The setup makes the film entirely uneven, where the simple,  straightforward pathos of the lovable losers is lost in a sea of narrative that moves forward at a frenetic pace.

Yamashita’s selection to direct this film as his latest comes across as odd because his handling of the material shows where his strengths as a director lie. He’s excellent at enveloping you in character studies of flawed loners and outcasts, but, in trying to convert sprawling manga chapters into a digestible two hours, he seems utterly lost as to what goes where in his narrative.

Yet the biggest strike against Hard-Core is that it just isn’t very funny. Yamashita’s treatment feels like it has its wires crossed as to what scenes are played off as comedy and which ones were meant to be tragic. I reiterate, you really shouldn’t have this problem when you have a scene of a robot doing the robot to thumping techno music, but alas, it’s an irrevocable flaw that the film never recovers from. It is not every day that a film with a robot could seem so forgettable, but Hard-Core begs to differ.