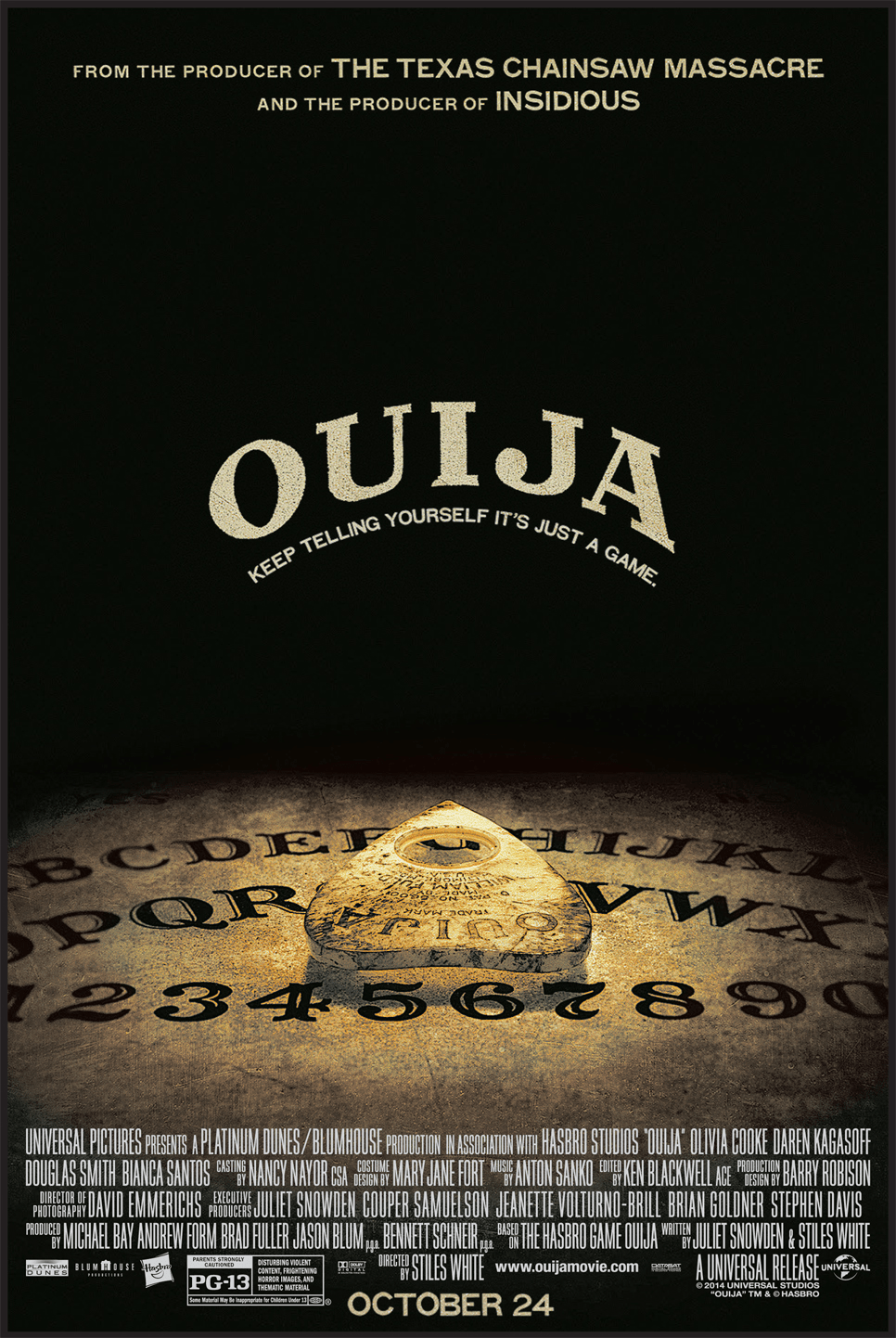 There are plenty of frightening things knocking about the local Wal-Mart, but Hasbro’s Ouija board – in the toys and games aisle right between Scrabble and Boggle – isn’t one of them. The mass-produced novelty made of common cardboard and plastic is not a vessel for contacting the spirit world but makes for a satisfactory piece of spooky entertainment for tween slumber parties. That’s clearly the target demographic for Ouija, a smorgasbord of homogenized horror that relies on jump scares and a rote haunted house story to supply the shocks. Predictably, the results are more tiring than terrifying.

Besties Laine (Olivia Cooke) and Debbie (Shelley Henning) are well schooled in the art of Ouija, having learned the rules when they were little. Debbie, now a high-school senior, tragically kills herself after committing the sin of using the Ouija board alone. Determined to find out what really happened, Laine summons a group of pals – boyfriend Trevor (Daren Kagasoff), faux rebel little sis Sarah (Ana Coto), Debbie’s ex Pete (Douglas Smith) and highly-likely victim Isabelle (Bianca Santos) – to join fingers on the planchette and slide their way to answers. Of course, they make contact with some super evil being and soon face danger around every corner and down every darkened hallway.

The cast of doomed teens is as generic as it can be, looking as though they’ve been ported over from any CW or ABC Family drama. Cooke has potential as a doe-eyed damsel but is given little to do other than mourn, mope or provide exposition in a soft voice. And there’s a ton of exposition to get through, handled clumsily by noted visual effects artist Stiles White, making his directorial debut, and his co-scripter, Juliet Snowden. Clichéd characters are underwritten ciphers, used to watch video diaries, read old newspaper articles and listen to sage advice from elders. The would-be paranormal investigators stagger from set-up scene to set-up scene, disconnected from what had come before or what may come next. They simply do what the artificial screenplay requires of them in the moment.

Seemingly aware their concept is as flimsy as a paper gaming board, the filmmakers overcompensate by tossing in lazy contrivances to chew up time before the next bump (or scream) in the night. There’s the ethnically ambiguous (though definitely not Anglo) housekeeper, who offers warnings and inexplicably knows all about Ouija follies. Lin Shaye (veteran of the Insidious series) shows up as an institutionalized old coot with a ghastly connection to Debbie’s creepy old Craftsman house and a penchant for succinctly summarizing its backstory.

Scare sequences don’t fare any better than the story machinations. White brings no life or imagination to the proceedings, following a familiar pattern of noise, wandering around in the dark and then REALLY LOUD NOISE in attempts to make you leap. It smacks of cheapness, and not a single jolt is earned through plot, tone, atmosphere or character arc. Ouija lumbers to obligatory reveals based on conveniently invented “rules” that we couldn’t possibly care about because we haven’t been put through a wringer; we’ve just sat passively as the requisite narrative hoops were jumped through in a quest to fill 89 minutes. In the world of horror, Ouija is tiddlywinks.