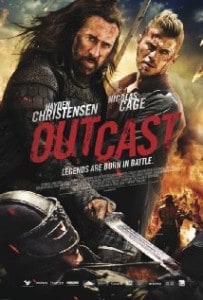 There’s a lot of dueling in Outcast, most of it involving bland swordfights or heirs angling for a vacated throne. The most entertaining of all the duels, however, is the battle of bad accents between Nicolas Cage and Hayden Christensen. I’d call it a draw.  At least when these two actors share the screen there’s something to behold beyond the dreary adventure plot, but their interactions are brief.

Cage is relegated to supporting duty that livens up the first and third acts – especially when he shows up living in a cave with one eye gouged out and a snake wrapped around his arm. Sadly, a majority of the film follows Christensen on an uninspired hero’s journey.

On a 12th century crusade, Gallain (Cage) and young commander Jacob (Christensen) are leading a bloody charge though what a title tells us is “The Middle East.” Gallain has grown weary of the carnage while Jacob is more cavalier; until, that is, he witnesses a shocking act of violence unseen by us.

Fast forward three years to a place a title tells us is “The Far East,” where a dying emperor bequeaths the throne to his young teen son. This angers the emperor’s older son, warlord Shing (Andy On). Before Shing is able to take the crown by force, sister Lian (Yifei Liu) escapes with their younger brother and the family royal seal. As Shing’s army gives chase, Lian crosses paths with Jacob, the former holy warrior now destitute and addicted to opium. Agreeing to protect the siblings in exchange for gold, Jacob fights off the army while attempting to reach refuge. 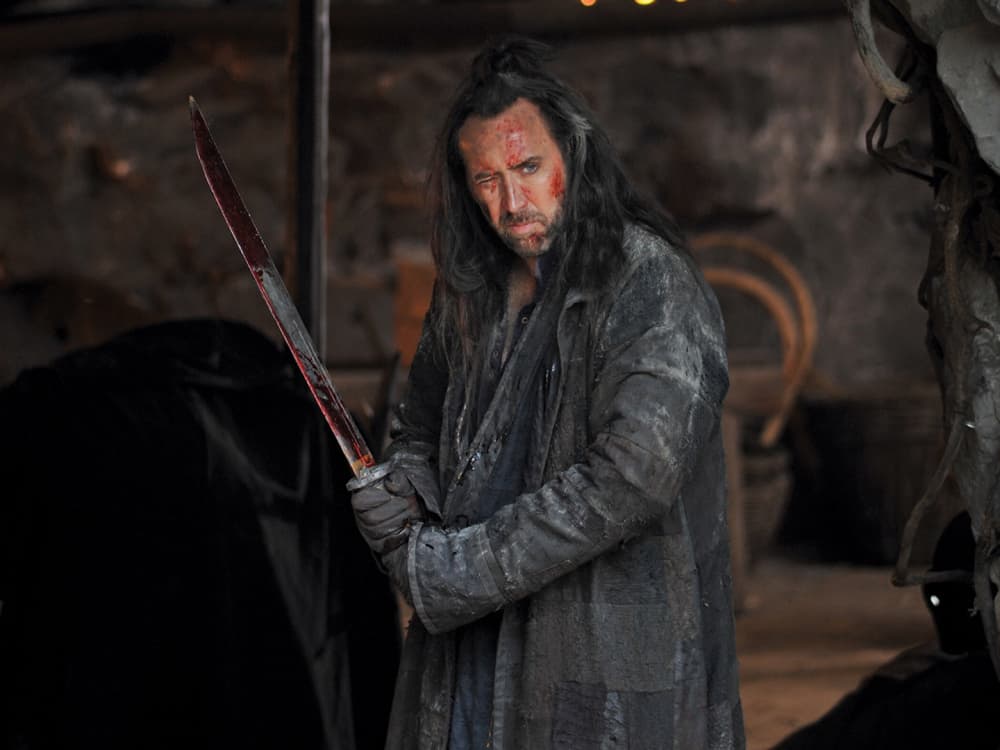 Jacob’s endgame is never quite clear:  Return the kingship to the rightful owner? Escape the kingdom never to return? The expedition, and therefore the film, is meandering and aimless, using the nebulous plot as a means to stage repetitive scenes of clanging swords and cursory relationship building. There’s potential in Jacob’s emotional journey – perhaps drawing from his time with Gallain to pass on knowledge to the meek young prince, or be conflicted over his feelings for Lian, or overcoming addiction to protect innocents. Outcast isn’t really interested in any of that and only explores those avenues in the broadest of strokes.

Christensen struggles to find meaning where there is none, resulting in a robotic performance consisting of cold stares and monotone line readings. At least Cage is having some fun when he reappears, hamming it up while attempting to keep the squint over his missing right eye consistent (he doesn’t succeed, but that’s all part of the enjoyment).  Unfortunately, everyone else plays things painfully straight.

With his directorial debut, stuntman Nick Powell manages the action with the all the nuance of a pratfall. Editing is often confusing as plainly portrayed violence moves from one meaningless sword swing to the next. Arrows all seem to find their mark, dutifully dispatching of soldiers as needed. To the production’s credit, the period feel exists in convincing sets, weapons, and attire, but there’s absolutely nothing of consequence beneath the veneer.