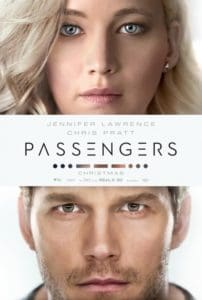 Passengers isn’t the movie that’s advertised in the trailers. To be fair to the marketing though, it’s hard to sell a film that never decides what it is. And why not try to push a sci-fi romance between likeable stars Jennifer Lawrence and Chris Pratt? Indeed, the charmers play two of many Earthlings traveling to colonize a distant planet. And yes, they are awoken from hypersleep 90 years early, but the circumstances make it impossible to go along with the love story.

How a premise that sounds promising goes so wrong so quickly gets into spoiler territory and will be left vague here. As the giant spacecraft Avalon hurtles towards its destination of Homestead II, a pristine planet awaiting settlement, it goes through an asteroid field. This causes a malfunction in Jim’s (Pratt) sleeping pod. Sometime later something goes wrong with the pod of Aurora (Lawrence) – who has the same name as Sleeping Beauty – and she’s up. Alone on the mammoth craft, the two fall in love, experience conflict, and then deal with existential threats as the Avalon begins to sputter and break down.

Jon Spaith’s script also has a lot of fits and starts. It feels like several stories have been consolidated into one mishmash that recalls everything from Cast Away to 2001, The Shining, and Titanic, among others. The story is sectioned off neatly, with none of the emotion carried over from act to act. Engineer Jim goes from desperate, to lovelorn, to happy, to devastated, and then to action hero when the situation calls for it. Aurora, a writer from New York, is similarly a pawn, but her treatment feels downright icky. The way she’s manipulated from doomed passenger to love interest is, quite frankly, vile and not as easily forgivable as the screenplay pretends it is. 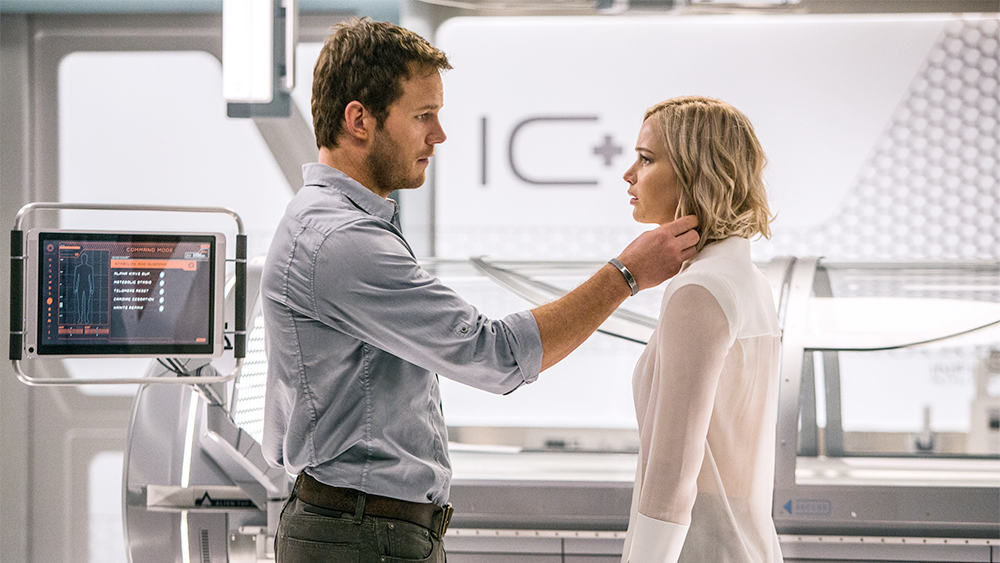 Even if we can get beyond the off-putting character elements, the sappy space relationship is completely forced, surface-level drivel. At one point Jim tells Aurora he’ll give her more space; her response – keeping in mind that she’s an accomplished writer – is, “More space is the LAST thing I need.” Their situation feels more compulsory than kismet.

The look of the film is much more immersive than the narrative, with the Avalon resembling a huge Carnival cruise liner in the cosmos, complete with movie theater, arcade, fancy restaurants, and other amenities available depending on class. The societal divide between Aurora and Jim is just one of several things never explored in their relationship beyond a one-time, one-note gag.

There are some impressive visuals, including a loss of gravity that creates peril for someone doing laps in the pool. Failing tech shows the progression of the threat, but several fundamental questions are hard to shake. Why exactly are all systems up and running? Why are there announcements for sightseeing opportunities if everyone’s supposed to be asleep? At one point a character laments the great deal of digging that needs to be done to find out why the ship is failing. A short time later, that person presses one button, asks the ship’s digital assistant a question and gets a clear idea of the problem.

Michael Sheen’s android bartender, whose bar looks a lot like the Overlook Hotel, adds a bit of eccentricity to the events, but he’s mostly used as a soundboard for Jim and Aurora to reveal their feelings and as a plot-driver. His basic bits of wisdom are perfunctory and not profound, much like Passengers as a whole. This space drama was doomed from the first twist.