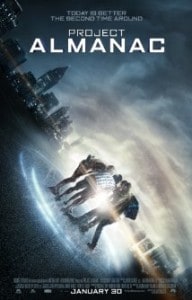 Teens construct a time machine in Project Almanac and do things that teens might do:  go back to ace a test, win the lottery, get revenge on a bully, check out Imagine Dragons at Lollapalooza, and so on. In a way, it’s refreshing that the focus is left relatively small. However, these trivialities, an exhaustive attempt to ground the time travel conceit in reality, and the inclusion of a dopey teen love story really bog the film down. Add the shaky-cam, found footage style and its inherent issues into the mix, and the dramatic thrust of the movie evaporates.

Brilliant high school senior David (Jonny Weston) is accepted to M.I.T., but lacks the funds to attend the prestigious school. Feeling nostalgic, David sorts through his deceased father’s possessions. First, he finds video footage of his 17-year-old self at his 7th birthday party. When he and his circle of friends – younger sister Christina (Virginia Gardner), Quinn (Sam Lerner) and Adam (Allen Evangelista) – investigate further, they find machine components and instructions on how to achieve “temporal displacement” in the basement.

Using stolen supplies from the school science lab and pieces of Quinn’s Xbox, the whiz kids build the device and commence testing. Jessie (Sofia Black-D’Elia), David’s longtime crush, is pulled into the plans when her Prius battery is used to power the machine. The missions to improve their social status commence, while inevitable complications threaten everyone’s future.

The kids are never really allowed to revel in their discovery, their time-hopping becoming merely a means for the production to shoehorn in David’s awkward courtship of Jessie and their ensuing complicated relationship. By extension, there’s not a lot of fun to be had for the audience, either. 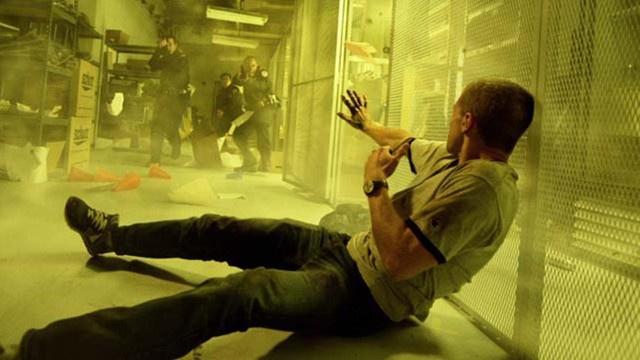 Instead of adolescent angst in the face of extraordinary circumstances, we get fickle emotional beats. By the time we get to time ripples and disastrous altered timelines, the huge stakes don’t feel real and are treated more like an obligation in the script. All of the sensational, wide-reaching developments are handled quickly. Much more time is spent screaming and jumping up and down at Lollapalooza.

By the way, though the movie foolishly devotes nearly half of its runtime to building the device, testing it, and establishing the mechanics and rules of time travel, it never accounts for the huge geographical leap the teens make. For the bloated Lollapalooza experience, the crew hops from their suburban Atlanta high school to the middle of the music festival crowd in Chicago’s Grant Park, the city’s famed skyline unmistakable in the background. Probably a minor quibble, but when you intensely establish the rules and then break them, it becomes more glaring.

Also standing out negatively are references to several other, better films including Back to the Future and Looper. These are just lame, self-aware attempts to add a sense of realism to go along with the found footage aesthetic, but they do nothing other than remind us Project Almanac isn’t in the same league as those movies. With science that doesn’t make sense, uncreative and unnecessary use of handheld camerawork staples, and characters overwhelmed by the trappings of the concept, Project Almanac lacks the grounded credibility it strives so hard for.