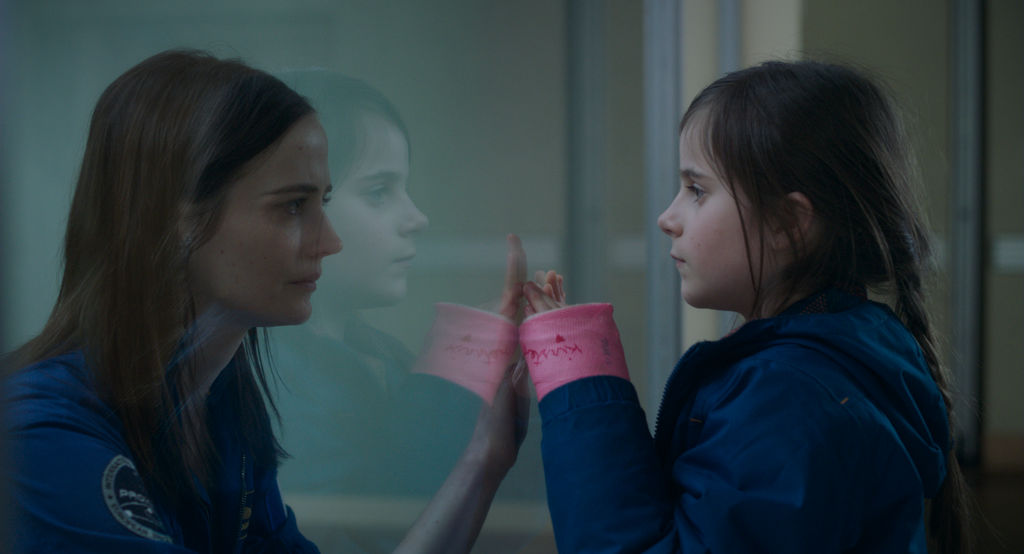 In our fundamentally connected digital epoch, it is a challenge for the ache of missing someone to still resonate the way it used to, when that person is eternally at your fingertips. For the imminently spacebound astronaut Sarah (Eva Green), the pining she feels for her young daughter, Stella (Zélie Boulant-Lemesle), is only exasperated by the taxing preparation and training schedule necessary for her lifelong dream of joining a space mission to become a reality.

Thousands of miles away from Stella at a Moscow training facility, preparing to be hundreds of thousands of miles away over the course of her year-long mission in the infinite darkness of space, the technological intermediates (phone calls, Facetime, emails, blog posts) that bring Sarah momentarily together with her daughter fail to fill the void. A single mother whose world essentially revolved around her daughter for the majority of her life, she becomes conflicted over whether or not she can let go of Stella for so long during such a profound separation.

Alice Winocour’s film (which she wrote in a second collaboration with Jean-Stéphane Bron) is named after both her space mission in the narrative and, astronomically speaking, the nearest star to Earth other than the sun. The irony of this concept is that the second-closest star is actually billions of miles away, a false sense of nearness that is reflected by the emotional distances between Sarah and Stella.

Winocour’s film is an emotional rollercoaster, bouncing between the highs of Sarah achieving her lifelong ambition and pushing back against the still very “boys club” feel of the space industry, and the lows of her realizing how difficult it is for her to be apart from the person who is dependent on her. In many ways, the supposed divide between the “career woman” and the “mother” archetypes of femininity is an outdated framing, but where Proxima injects a new poignancy into this is through the trials and demands of the space profession cast against its protagonist’s maternal pangs.

In addition to Winocour’s intimately understated direction, the film sells this perspective through the anchoring performance of Green. Carrying the emotional toll brilliantly through the grueling steps of her training, hinting subtlety at how severely the separation from her daughter has affected her, Green delivers a powerhouse of a performance dripping with nuance and complexity over her character’s extraordinary position.

Juggling her enthusiasm for achieving her childhood dream with the sacrifices it demands, Green singlehandedly carries the film and makes the repeated scenes of her longing emotional distress feel fresh and devastating every time. That slow, encroaching realization that the absence from her daughter is more distressing than she first realized, and the drawing out of that realization in particular, carries the film through its lagging second half, which is inundated by training montages.

There is a keen sensitivity to her struggle that Winocour is able to exhibit quite effortlessly in her script and direction. Exploring the culture of sexism within the space industry is somewhat of a nonstarter for the film, however, and is relegated to a brief, underexplored subplot despite the addition of a thankless Mat Dillon, who shines as the mulish American captain of the Proxima mission. Dillon’s character, Mike, spouts stereotypes about the French people and undermines Sarah’s suitability for the mission due to her lack of experience (but more likely as the only woman of the European Space Agency on the mission).

What sets itself up as a secondary conflict is unceremoniously dropped midway through as soon Mike is relating to her over the challenges of parenthood in their position and becoming a support to lean on for the spiralling Sarah. This is probably for the best, as Wilocour and Bron knew the real emotional weight of the story lies within the central, complicated, mother-daughter relationship and not a half-formed critique of institutional sexism.

Proxima hits whenever Green and Boulant-Lemesle share the screen or are, purposefully, separated by thousands of miles and cling to whatever access they can. A loving tribute to the still-relevant balancing act of motherhood, Winocour’s film applies a light sci-fi spin and a crushing emotional delivery to make it work like new.