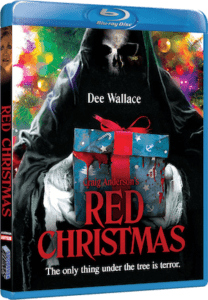 In the ever-expanding subgenre of holiday-themed horror films, Red Christmas has plenty of elements that make it stand out. For starters, it opens with an abortion clinic bombing complete with an eerie – and eerily prophetic, as it turns out – voiceover that mentions anger “on both sides.”

The unconventional opening sets a realistic macabre tone, but melding the abortion topic with a Yuletide slasher proves difficult. Writer/director Craig Anderson constructs several moments of impressive, over-the-top gore, which tear apart a family in crisis, though the dismemberments and spurting wounds offer an irreverence that struggles to dovetail with its touchy subject.

Beloved horror vet Dee Wallace (The Hills Have Eyes, The Howling, Cujo) plays Diane, the matriarch of a large, diverse family that’s celebrating the holidays at their secluded Australian home.

Her brood includes Jerry (Gerard Odwyer), an adult with Down syndrome; free-spirit artist Hope (Deelia Meriel); Suzy (Sarah Bishop), who arrives with her pastor husband; and the pregnant Ginny (Janis McGavin). Soon after the clan gets together, an uninvited guest shows up. Cletus (Sam Campbell), a cloaked and bandaged man, arrives at the door with a letter he wants to read to “mother.” After being kicked out, his anger at being rejected – again? – makes him lash out in horrific, murderous ways.

Family dynamics and dysfunction predictably set the stage for escalating tension. The pregnancy theme is belabored with the overall story and in the obvious details, including the resentfulness that the barren Suzy shows the pregnant Ginny. Any plans and new beginnings, including the notion of selling the large family homestead, are put to an end when the reaper-looking Cletus begins exacting vengeance. 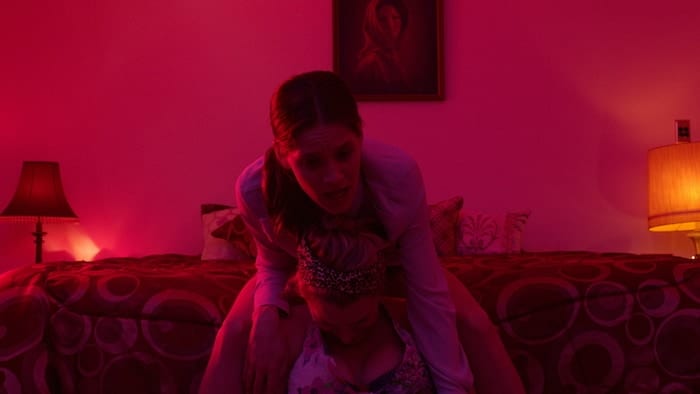 The thematic resonance is lost a little bit when the family members begin putting themselves in positions to get picked off one by one. Anderson stages many scenes with low angles and a quaking, handheld, whirling camera, which gives a sense of credibility to desperate people acting irrationally…but not quite enough to forgive their foolishness.

The slayings are vicious, many taking place in dim lighting from blinking Christmas lights (which somehow still work after the power’s been cut) or pale, almost-neon red and green tones, which provide an unnerving atmosphere. The spacing out of the kills feels slow, however, and though the film runs just 82 minutes, there’s a sense of just waiting a long while for the next victim to fall into a trap.

Wallace is the bright spot, centering the film with her sincere discomfort and pain at her family’s dwindling numbers and agonizing over the role she may have played in it. Unfortunately, Red Christmas is too scattered, plot and pacing-wise, to make her agony pay off. Similarly, the reveal of Cletus (you know those bandages are coming off at some point, right?) is a disappointment; his look being the most glaring example of a limited budget. 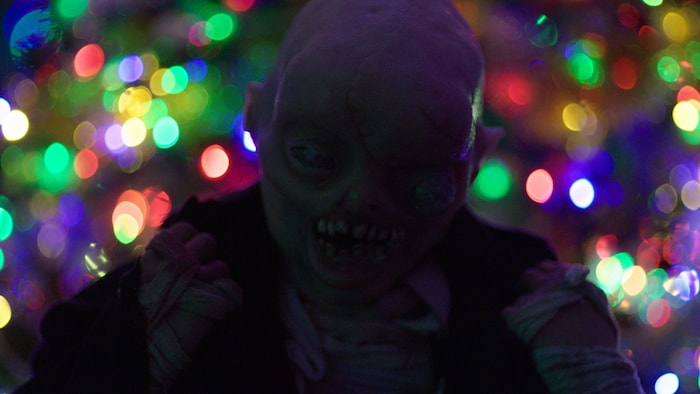 Red Christmas isn’t afraid to raise complex moral questions and doesn’t back down from their stickiness, but ultimately there’s a lack of pushing the debate fully into tastelessness or a profound purgation. Despite some energy and inventiveness, the film is stuck in a mostly listless zone between taking itself too seriously and having fun with its exploitative elements.