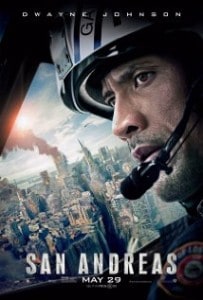 About five minutes into my screening of San Andreas a ceiling tile in the auditorium popped loose right in front of the screen and obstructed the projection. The film was stopped, an employee wielding a large pole appeared, and he knocked the intrusive object out of the way. The loud, effects-filled earthquake disaster movie was promptly fired back up. The few moments spent watching that ceiling tile flutter several feet to the floor were the most thrilling of my two-plus hours in the theater.

Assembled with spare parts from the disaster movie assembly line, San Andreas hits all the familiar beats – exposition is provided by reporters and scientists, landmarks are destroyed, and protagonists overcome insurmountable odds. All of it is staged and executed in such a matter-of-fact way by director Brad Peyton that the full scope of the carnage barely registers and we long for the lunacy of Roland Emmerich.

The grandeur of the movie’s events is further drained by the questionable choice to narrow the focus to a single family and their quest to reunite and survive. No doubt it’s typical to gloss over the countless deaths in such a film, but San Andreas is particularly cavalier with its ignorance, trying to marry huge CGI spectacle with extremely personal melodrama, failing to hit the sweet spot of either element. Only the charismatic Dwayne Johnson and steady performances from Carla Gugino and Alexandra Daddario find their mark, somewhat livening up an otherwise deadening experience. 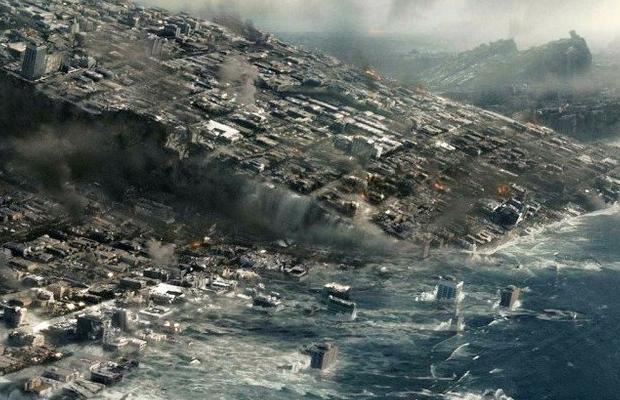 Johnson plays Ray, a revered rescue pilot for the LAFD who is separating from wife Emma (Gugino). These things are shown to us in the most customary of ways: the movie opens with Ray valiantly rescuing an annoying teen after her car careens off a mountain; he then returns home to find an envelope marked “DIVORCE PAPERS” in the mail. After a series of quakes shake Nevada and destroy Hoover Dam, a big one (never referred to as THE Big One) hits Los Angeles and works its way north up the California coast.

As highways crumble and buildings sway below Ray’s helicopter, he makes a beeline for his wife and arrives to snatch her from a downtown LA rooftop just in time. Then it’s off to San Francisco to attempt to save their daughter Blake (Daddario), who made the trip to the Bay Area with mom’s rich new architect boyfriend (Ioan Gruffudd). He exists so we have acts of cowardice to hiss at and something to cheer should anything bad happen to him. (Spoiler that’s not a spoiler: it does, though it sure doesn’t feel very rewarding).

The screenplay by Carlton Cuse holds our hands the entire way, and its bland fact regurgitations and emotional proclamations are never ridiculous enough to have fun with, nor convincing enough to deepen the drama. Not even the always great Paul Giamatti (as the requisite genius seismologist) solemnly stating, “It was the most powerful earthquake in recorded history” is enough to elicit a response. By the time the huge American flag is unfurled and the score swells in the final scene, it’s as if none of it – from numerous attempts to outrun expanding ground fissures, to skydiving into a baseball stadium, to riding a tsunami wave – really mattered, anyway.