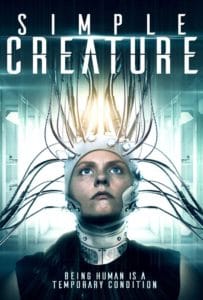 The very concept of transhumanism, the belief that the human body can be pushed past its physical and mental limitations through an incorporation of technology, seems like a narrative concept that is almost impossible to make mundane and stale. The implications, possibilities and risks of the wavering status of humanity transhumanism challenges would supply even the most basic science fiction writer with a wealth of existential questions.

Simple Creature, however, never bothers to ask any of these questions in its Bionic Woman-like fable because, beyond skimming the surface of the possibilities of mechanical augmentation, director Andrew Finnigan shows he hasn’t the drive or perhaps the budget to delve any further.

Bearing its catchpenny budget on its shoulders with sets of laughably barren mise-en-scène, the film unfolds uneasily as if confused to what particular issue related to the transhuman debate it wants to address. “Millennial” college student Em (Carollani Sandberg), whose supposed mastery of modern technology is marked by her dependence on a smartphone, is involved in a near-fatal bus accident that prompts her father to rebuild her because of course “we have the technology.”

Mind you, we never actually see any of this technology due to budgetary constraints, but the script poorly fills us in with its bizarre, layman techno jargon, making one doubt that Finnigan, who along with directing and writing this dreck is also responsible for the screenplay, hasn’t the slightest clue about medical technology. He’s more comfortable with employing buzzwords like nanotechnology as insipid catchalls to the process to ensure no one could be intellectually stimulated by his story.

As Em recovers from her condition, Finnigan demonstrates how uninterested he was in transhumanism to begin with by diverting the film’s attention to her boyfriend, Seth (D’Angelo Midili), and his struggle to keep his family farm operational after his father’s passing. For some unknown reason, Finnigan thought it was prescient to draw parallels between human augmentation and corporate farms infringing on the family-owned business under Simple Creature‘s blanket thesis: “technology does not equal humanity.” These scenes before Em’s reintegration into the film’s narrative are only useful to highlight its atrocious sense of pacing. 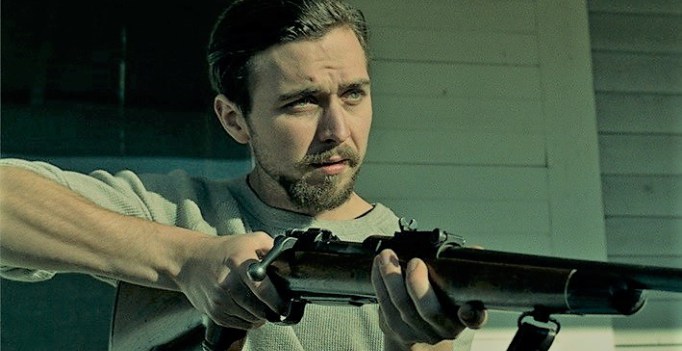 Half of the film is presented in flowing montage, which dances around things like character building and story through excessive cutting, while the other half is comprised of monotonous dialogue exchanges that played more like the actors building a demo reel, seeing how much personality they could cram into their blank characters.

It is as if the film is permanently stuck its own Kickstarter promotional video, trying to secure enough budget to have makeup effects beyond Em sticking an iPhone cord into her arm to check her vitals. Filming, as he does, from natural light obstructing long shots of utter apathy, Finnigan’s inconsistent aesthetic practically broadcasts the fresh-out-of-film-school pretensions that one harbors when they earnestly think they can be the next Shane Carruth.

As the film goes on, it spirals into a lackluster conspiracy thriller involving the facility in which Em was transformed and the farmers plotting to expose them before limply petering out. Simple Creature is a surprising film in that it somehow made transhumanism boring. Not sure where it wants to place its mistrust of technological advancement that stems from its own ignorance of the topic, Simple Creature spins its wheels futilely without a solid point to make or the means to do so.

One Response to “SIMPLE CREATURE Review”