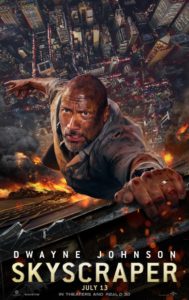 I have a theory that Skyscraper’s screenplay was reverse engineered from exactly one line of dialogue, which occurs about five minutes from the end. To avoid being overrun by people who would accuse me of spoiling a movie that’s unspoilable, I won’t explain it further. But consider this: it’s the culmination of a finale-long Russian nesting doll of every bit of exposition set up in the film’s first act.

The moment is uncharacteristically tight, a little overprogrammed and, at the point of delivery, cool as ice. Writer/director Rawson Marshall Thurber achieves an involving coup with all the early setups paying off, alongside a long-term game that stretches beyond the soft middle of everything else. Otherwise, he’s at his best sticking to the bread-and-butter, elaborate CGI action setpieces.

His star, Dwayne Johnson, performs them all with his great physical capabilities and endless supply of family-man charisma. The logline has been pieced together from an encyclopedia of action movies: a terrorist plot without clear motivations; an absurdly high high-rise; and a former FBI agent, who swore he would never see action again but who now must save his family.

As the action blooms and stakes rise, Thurber throws us in with all the rollercoaster amusements, shattering the laws of physics and anatomy. He plays it for the crowd with the earnestness that a movie like Skyscraper requires. Johnson’s Will Sawyer – a security consultant contracted to clear the grand opening of The Pearl, a 250-story tower in Hong Kong – hangs off the sides of the mammoth structure at least three different times. 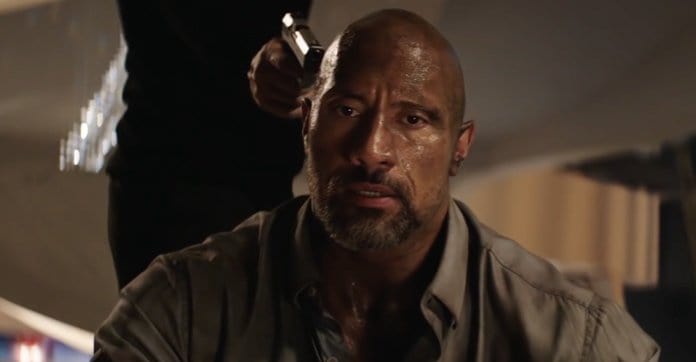 Inside, his wife, Sarah (Neve Campbell), and young twin children (McKenna Roberts and Noah Cottrell), navigate among the roving band of terrorists and the fire said criminals have set on the 96th floor, two stories below their apartment, which rapidly engulfs large swaths of the building.

It’s just as well that Will would spend so much time on the outside. He leaps off cranes and into fiery rooms that a police helicopter has deemed too hot to sweep. He climbs around the building’s exterior with a duct tape harness. He jumps through the blades of a giant on-board wind turbine. These sequences allow Thurber, and cinematographer Robert Elswit, to create some startlingly effective shots of Will staring down at the ground thousands of feet below, as Hong Kong’s nighttime cityscape blurs and spins around the frame, its vibrant color-wheel effect enhancing our disorientation.

Here are the occasions when Skyscraper hits a kind of peril-tinged silliness that many movies attempt but few fully achieve. In these moments, we believe that Will could operate with superhuman resourcefulness, despite his physical and emotional distress; we believe that he could use duct tape as the answer to every problem presented; and we believe that his prosthetic leg could wind up with a kind of versatility that the Swiss Army could only dream of for their knives. 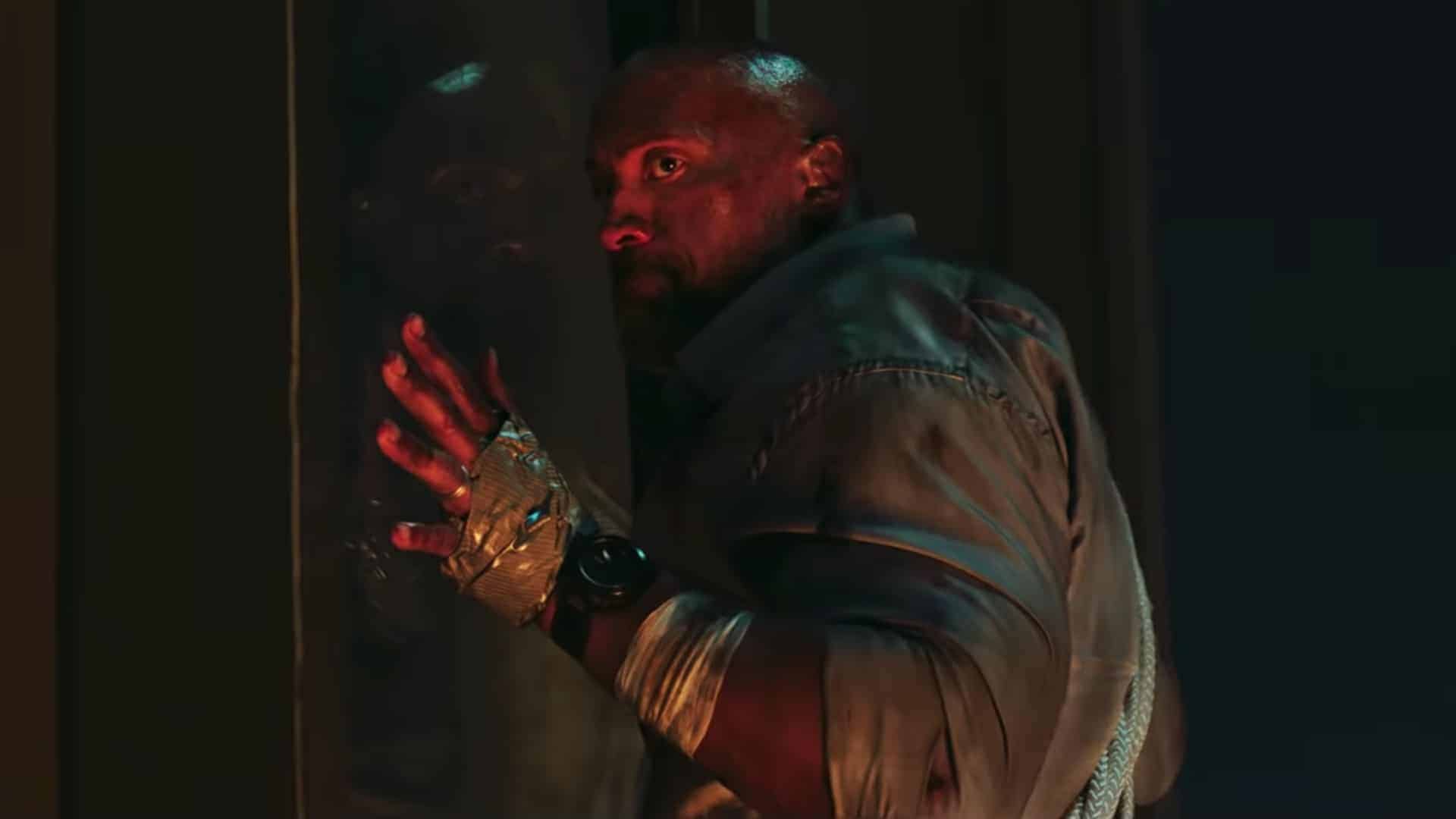 But the scenes inside aren’t handled with nearly as much skill. The Pearl’s geography is always a little off, making the surprise appearances of bad guys even more surprising when we’re not sure where they were in the last scene. Their motivation – stealing an incriminating hard drive from Zhao Long Ji (Chin Han), the building’s billionaire owner – is so poorly explained that it might as well not have been there at all to clutter up the transition to the climax.

Skyscraper falters when trying to over legitimize its otherwise carefully concocted nonsense. Considering the lengths to which its ridiculousness goes, it tries too hard in checking in on our sensibilities when we, in the very act of seeing it, have given said sensibilities over to its world. The air-conditioning blast of the multiplex lobby is like a symbolic act of us blowing off our baggage, and every moment that the film reaches too far, more of it comes apart. 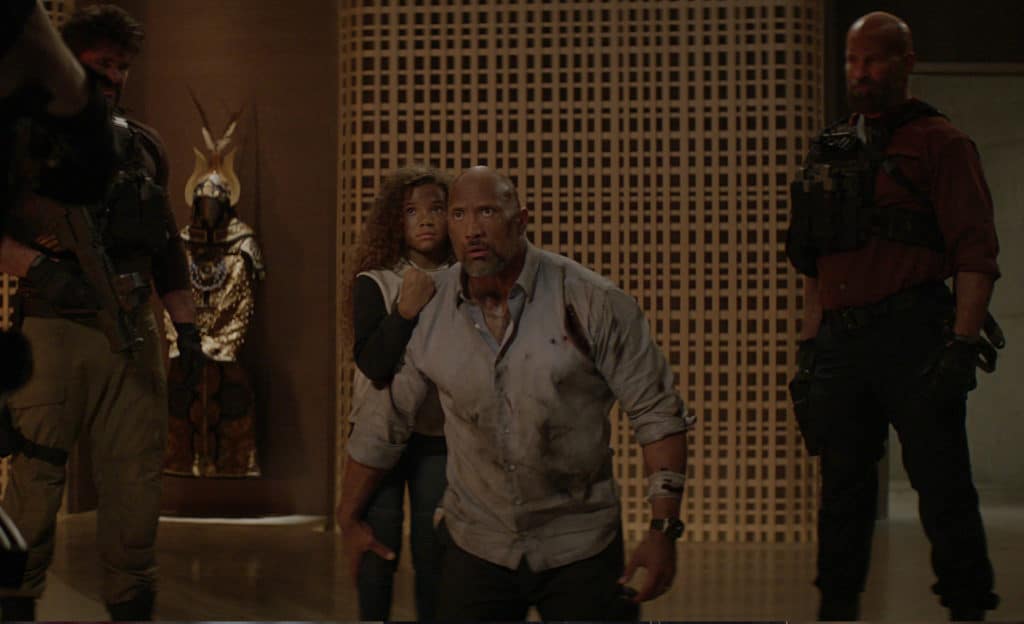 Still, there’s a solid backbone to the entire production. It’s what carries it through its hero’s impractical strength and out toward the final point, through which it delivers that kicker of a line that doubles as the origins of its universe. Critics have been quick to point out its merging of the loglines of The Towering Inferno and Die Hard, but as for what it actually achieves, it’s very specific to its current moment. It’s about Johnson, hanging from ledges and smashing through glass, in his career’s emphasis on adventures about his characters’ familie and reuniting them.

His integrity as a performer and representative for that emotional core is the yin to the slick action’s yang. This is all part of the entertainment package that is Skyscraper, in the same way that it was for something like San Andreas – another fun, airy excursion that contains a post-action, hopeful dialogue exchange between characters that winds up directly replicated here, word for word. What a friend we have in Dwayne.