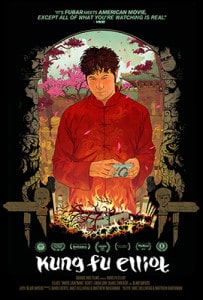 What starts out as a Canadian version of American Movie, evolves into something much more than what directors Jaret Belliveau and Matthew Bauckman probably thought when setting out to create the documentary Elliot.  This surreal and awkwardly funny film profiles Elliot “White Lightning” Scott, as he attempts to become Canada’s first martial arts action star with his film Blood Fist.

This film, like American Movie, straddles a thin line between being an informative slice of life documentary and an exploitation film that could potentially damage the subject.  Fortunately for Belliveau and Bauckman, Elliot ultimately self sabotages himself enough that the viewer will end up rooting against him rather than feeling sorry for him.

Initially, Elliot leads us to believe that he’s just a simple man setting out to be the first martial arts superstar from Canada.  He claims he’s a 5th degree blackbelt in Karate and holds numerous champion trophies.  He’s unemployed, but this enables him to focus all his time and energy on completing what will become his magnum opus- Blood Fist.

Supporting him in his journey is his devoted girlfriend Linda.  Linda is Elliot’s rock, providing not only financial support, but also aiding him in nearly every aspect of his filmmaking.  While she would love more than anything to have him propose, she’s willing to wait patiently. 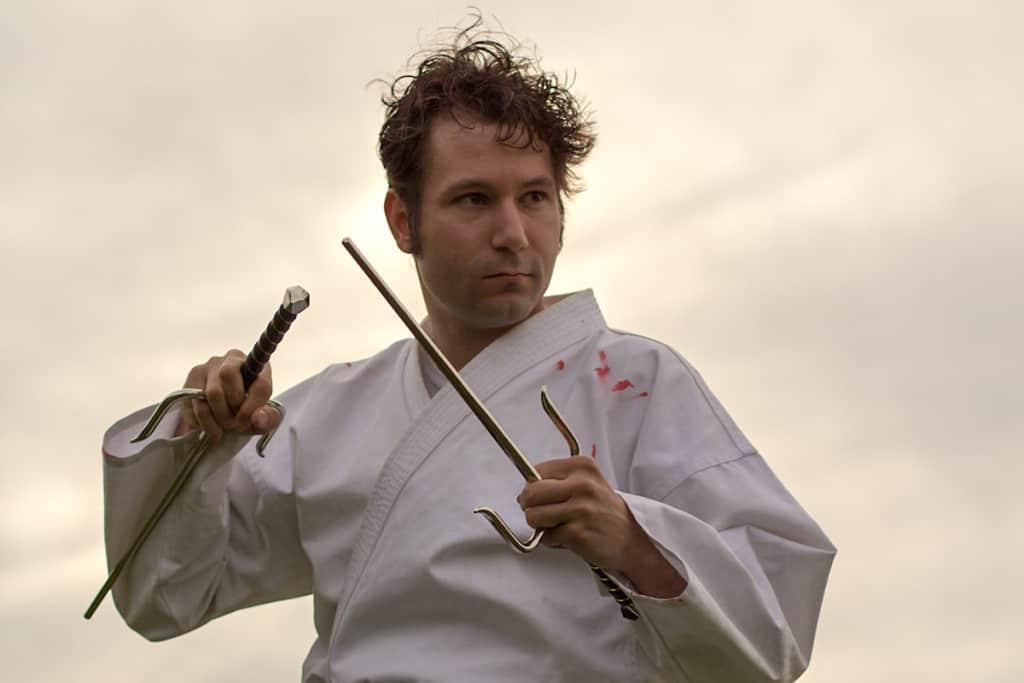 To divulge where the film goes would be spoiling some of the most revelatory and shocking moments, so we’ll just say it gets crazy.  Deception, lies, betrayal, and plenty of awkward karate propel the film to almost unbelievable levels of ridiculous.  This made the film incredibly fun to watch, and even more fun after realizing that Elliot isn’t a likable guy at all.  Once the cat’s out of the bag that he’s kind of a huge dick the viewer can stop feeling bad for him and simply revel in just how jaded and megalomaniacal he is.

The film feels oddly structured almost like a found footage horror film.  Most of the 96-minute runtime is spent with Elliot struggling to get Blood Fist made, but the final act speeds up to the point of seeing him working on three or four other movies.  This footage contains so many cuts, voiceovers, and scene changes that it felt rushed or truncated to save time.  This is where Elliot shows his true colors as well, which makes me wonder if he was hiding it all this time or if he was actually losing control and just didn’t care about the cameras anymore.

Elliot is an incredibly entertaining and ultimately bizarre documentary about a man chasing a simple dream of becoming the next Chuck Norris.  You can theorize how this will turn out, but you won’t see how it gets there.