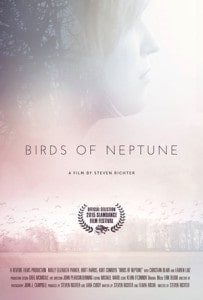 In the opening scene of Birds of Neptune, high-school senior Rachel (Britt Harris) anxiously waits for her number to be called at a health clinic. We’re pretty sure we know why she’s there, and her reaction driving home makes us certain. There are thoughtfully constructed moments like this sprinkled throughout director Steven Richter’s film, unfortunately they’re few and far between. The pensive tone of the movie is a benefit on the rare occasions the artistry connects, though ultimately this is a quiet movie that doesn’t have a lot to say. When the characters attempt thoughtful conversation, the screenplay reveals its strain for meaning.

Rachel lives with older sister Mona (Molly Elizabeth Parker) in a creaky old house in the Pacific Northwest, left to their own devices after the death of their parents a few years earlier. The house feels out of time, with old family photos and a generally oppressive, dank feeling enveloping the siblings. It appears the family was an eclectic bunch, with a variety of musical equipment, mismatched furniture and an old collection of records populating the living room.

The psyches of the sisters are further placed in turmoil with the arrival of Zach (Kurt Conroyd), a psychology student who tries to discreetly exert control over the broken home.

In films that deal in subdued, raw emotion and abstract arcs and goals, so much relies on the performances and judicious use of imagery and dialogue to lead us. Harris is the only cast member who is consistently engrossing, bringing her sweet smile and big eyes to Rachel while simultaneously suggesting the emotions that are bubbling underneath. Parker is saddled with most of the overt, expressive high points, including a short monologue about Neptune being the “invisible planet” and the thin metaphor that applies to their situation. In a couple of scenes she wears a pale white mask while giving teary-eyed asides. The screenplay doesn’t do her a lot of favors, but the real issue is Parker’s desperate effort to find the significance in every word and even every deep breath. It’s more than a little too much.

That the sisters allow Zach’s intrusion is telling, though his quiet, constant oppression isn’t really needed to shine a light on the dysfunction of this struggling household. There’s an interesting angle with his controlling ways being a method for coping with his own identity issues – psychological and otherwise, but final-act eruptions feel compulsory rather than organic and rightly terrifying.

The serviceable turn from an engaging Harris is swallowed up by the film’s futile search for insight. Rachel has our sympathy, but the film never gains our full investment or establishes an appropriately allusive wavelength. Maybe it all makes sense and is really deep on Neptune.