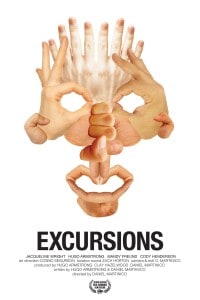 Excursions is excruciating. Ostensibly about two couples congregating at a cabin in the woods to reach some sort of enlightened state of being by way of meditation and other unexplained hokum, the trip is certainly long (even at only 80 minutes) and strange, it’s just missing a point. A dialogue-free, uneventful opening ten minutes sets the stage for the pretension of a grating, eye-glazing existential crisis of a film. Whether we’re supposed to pity these poor folks, take them seriously, or laugh at them is completely immaterial because we’re never made to care at all.

We learn very little about the two couples, not even their names. The first pair to arrive at the cabin are the fair-haired owners of the vacation property (Hugo Armstrong, also the co-writer, and Jacqueline Wright); the second pair is brunette (Mandy Freund and Cody Henderson).

After getting the mindless chit-chat and some rousing cabin games – including cup stacking and a rock-paper-scissors tournament – out of the way, the four lost souls swap partners and then engage in increasingly weird activities apparently designed to enlighten mind, body, and spirit.

That may sound interesting, but Excursions willfully removes any of the intrigue from the peculiar happenings. The straightforward, matter-of-fact presentation of the events from director/co-writer Daniel Martinico could be effective if there were some sense of escalation, but as the bland quartet hums rhythmically, douses each other with buckets of water, jumps repeatedly to the point of sweat-drenched exhaustion, and so forth, motives remain elusive.

There are hints of trouble in the relationship of the couple portrayed by Armstrong and Wright as they prepare for the weekend by stocking groceries, negotiating a narrow spiral staircase with luggage, and chopping wood. The most satisfying and slightly humorous moment of the film occurs as Armstrong struggles with the axe, but like everything in Excursions it goes on for too long. When the partners finally do talk to each other, they don’t even look at each other and speak in worn-down monotone. 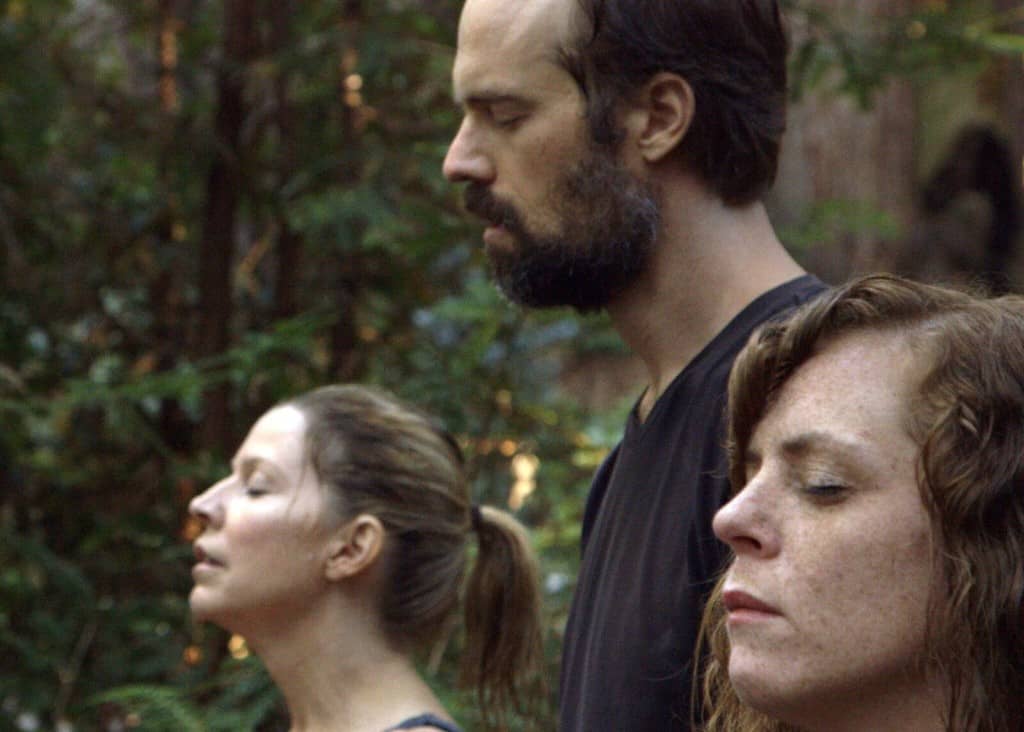 So there are signs of tension and potentially desperation, though the reasons for it, the methodology to cure it, and the final goals are never made clear. A few words of deadpan chanting, repetitive ridiculous actions, or close-ups of hands hovering over body parts and a scrub brush whooshing over the skin during a ritualistic cleansing aren’t nearly enough spark interest. The tone is so dry any potential humor loses its bite and any potential drama is destroyed by the tedium.

Four one-word chapters suggest stages and inspirations for the lunacy on display, however the journey of the characters is so personal and obtuse it has no effect on us. Perhaps that’s the goal – leave us so detached and disinterested in these saps looking inward to cure whatever ails them that we completely block them out as we admire the natural beauty of the forest that surrounds them. Several insert shots of light coming through a canopy of branches and low angle shots extending up the trunks of old-growth trees imply a higher power or grand presence – be it ethereal or natural, that dominates the simple human beings.

Are we witnessing the futility of man? A genuine breakthrough? And what’s with wrapping that person’s head like a mummy and that other person coating their face in blood and mud? Who knows? With what we’re given, it’s impossible to tell, let alone bother to explore any potential themes in detail. Like many of life’s grand existential questions, Excursions remains mysterious; unlike those grand questions, Excursions will always be uninteresting.