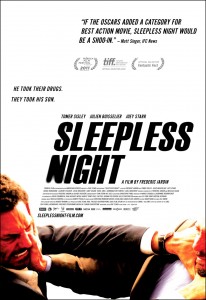 Sleepless Night, the new French action film written and directed by Frédéric Jardin, combines all the visceral action of a film like Die Hard, with the suspense and urgency of 24.  While the film itself doesn’t stray too far from the standard action formula, it still manages to take us on fun ride over the course of one crazy night.

Shot almost entirely in what appears to be the largest, most labyrinthine night club in the world, Sleepless Night follows Vincent, a cop who ends up on the wrong side of the law, as he attempts to make things right, and save his kidnapped son. Caught between the gangsters that have his child, and the police that are chasing him down, Vincent needs to make his way through the crowded night club and get himself and his son to safety.

Although this is not an entirely original concept, the execution of the story is expertly done.  Within the first minute of the film, we’re thrown into the action, which sets the tone for the rest of the movie.  It’s fast paced and at times frantic, but does let us catch our breath from time to time.  The fact that it also takes place over the course of one night, in one centralized location, also adds to the suspenseful nature of the film. Although the club seems to be enormous, with many back hallways and side rooms, it’s also very crowded and feels claustrophobic at times, which helps accentuate the frenzy, along with the ever present thumping of the club’s music.

Having the entire film take place in this club is an interesting idea, however there are several questions of logic and common sense that are raised.  Mainly, the fact that there are numerous gun fights throughout the film, and no one seems to be frightened or call the police. There are also several fights that take place in very public areas, and yet everyone seems to just ignore the fact that men are being killed around them. Personally, if I’m at a club and I hear gunshots, I’m out of there, I don’t care if they just started playing that Queen song I love.

Logistical problems aside, this is still a fun movie to watch.  The fight scenes are very realistic looking and feel very brutal.  Instead of going with meticulously choreographed punches and kicks, Jardin decided to go with a more simple approach.  The men who are fighting look like there’s a purpose to every punch.  They are doing it out of necessity, not because it looks flashy.  Vincent does everything within his power to fend off his attackers and get to his son.  He uses the environment to his advantage, grabbing at anything and everything that will stop the people trying to kill him.

Sleepless Night does a lot of borrowing from Die Hard, but still manages to stand on it’s own as a top notch action film. With an engaging story, and some excellent fight scenes, this is an easy recommendation for any action fan.  It’s also been recently announced that this film will be getting an American remake, so it’s certainly worth checking out before we ruin it with our own version.